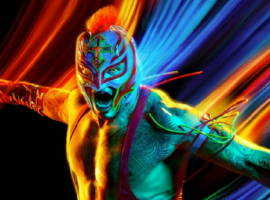 WTF Why so much kayfabe?!

While I certainly do have my own views concerning what I regard as "art", as would anyone, I do not share Chi's opinion for WWF SmackDown: Just Bring Its "Create-A-Wrestler" mode. I've always viewed these features as nothing more than extras designed to beef up a game. Such options would attract my curiosity for little more than five minutes, browsing around to see what they offered in terms of choice and originality, before I permanently left them alone.

'What is art?' is one of those questions for the ages that no two persons will agree on, but almost everyone will undoubtedly have an opinion. While it is simply impossible to explore the infinite depth of the question to any great extent in the confines of a 1000 word game review (about a Rasslin' videogame no less), I think most can agree that art has plenty to do with self-expression.

Well, after reading Dale's review and considering some of his points, I must admit that I had a little change of heart and felt compelled to lower my rating on Smackdown 2. The game definitely has major issues that I needed to emphasize more.

Its no secret that developers dont have the best track record when it comes to producing videogame sequels. Some will attack the problems that plagued the original in a deliberate attempt to improve upon the playing experience. The rest will just add the prerequisite bells and whistles fans are demanding without giving much thought to how the entire package will fit together. That appears to be the case with Yukes sophomore WWF release, WWF Smackdown! 2: Know Your Role.

Like it or not, names like The Rock and Stone Cold Steve Austin are now part of the nation's lexicon, and it's hard to go a night without seeing some sort of WWF-related event on television. This sort of rampant popularity has spilled over into the videogame industry, which thanks to astute developers like Yukes and Aki, allows couch potatoes to pull on tights and get down and dirty with the WWF superstars. One of the more anticipated wrestling titles was THQ's WWF No Mercy, the follow up to the wildly popular WWF Wrestlemania 2000. Though not quite revolutionary, WWF No Mercy definitely delivers what wrestling fans have been begging for since the last release: more wrestling goodness.

Despite having an identical rating, Dale and I arrived at the same destination rather differently. Dale notes in his review of WWF No Mercy that there are moderately remarkable improvements over its predecessors, but doesn't seem think these updates are anything ground-breaking. I disagree with that, but not entirely.