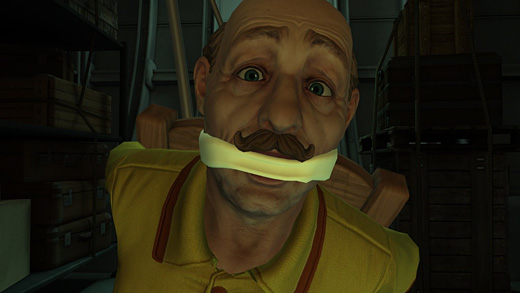 HIGH The environments are expertly crafted and highly atmospheric.

LOW Numerous bugs crop up throughout the adventure.

Murder mysteries have just a single rule that they need to obey. No matter how outlandish the setting, characters, or events, any entry in the murder mystery genre must contain but one thing—a solution. At the end of the story, we must discover who did it. It's actually right there in the genre title. Given that I've chosen to open the review this way, would anyone care to guess what my main problem with the game Still Life was?

Just a few minutes in, I was absolutely sure that Moment of Silence was a European game. It opens with a stunning cutscene that depicts a group of stormtroopers raiding a journalist's apartment and kidnapping him while his family looks on in horror. How does the main character react to this? Run out into the hallway, guns blazing? Climb out the window and work his way down a series of drainpipes and trellises to steal the SWAT team van so he can infiltrate their base? No, he watches the scene through a peep-hole and then, when the commotion has died down, he goes into the hallway and retrieves a teddy bear tossed aside during the struggle, then returns it to the crying child of the kidnapped reporter. So, yeah, right as the game begins, I'm fairly sure no North American developer was responsible for this.

According to ESRB, this game contains: Blood, Mild Language, Violence

Like Erin, I also spent time with some PC adventure titles during my youth, most notably Space Quest and the infamous Leisure Suit Larry series. 1998's Grim Fandango was a more recent one, and I enjoyed that just as much as the old-schoolers, if not more. So, it comes as no real surprise that I thought Broken Sword: The Sleeping Dragon was a great disc to spend time with. It meets all the genre's quasi-requirements like snappy dialogue and a light tone, presenting a genuinely enjoyable adventure. It may knock twitch gamers unconscious with its lack of combat and relatively slow pace, but this is a kind of game that I don't want to see disappear into the annals of history, mouse or no mouse.

In terms of winning over new gamers to the cause, I doubt that the addition of a few things to climb on, some very elementary stealth scenarios, and a whole bunch of crates to push around doesn't change the game enough to appeal to those who find adventure games boring to begin with. The Sleeping Dragon is more about keeping the faith than anything.

According to ESRB, this game contains: Blood and Gord, Mild Language, Violence

According to ESRB, this game contains: Mild Violence.

Chiding a game for being a perfect embodiment of its genre is dangerous, and runs the risk of missing the point altogether. But I can't help feeling that the genre lacks one crucial feature that forever cripples it: there is no risk of failure.