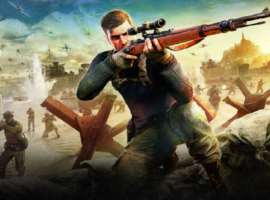 By Daniel Weissenberger May 4, 2022 Blogs 0 comments

While making the video preview of Sniper Elite 5, I sent a question to the developers inquiring why they added non-lethal options on top of the already-present stealth takedowns and ranged combat. Maybe this was all just a huge misunderstanding, and the developers were so laser-focused on the mechanics of their game that they didn’t stop to consider the context in which those mechanics were being implemented.