You Face a Dúnadan Now! 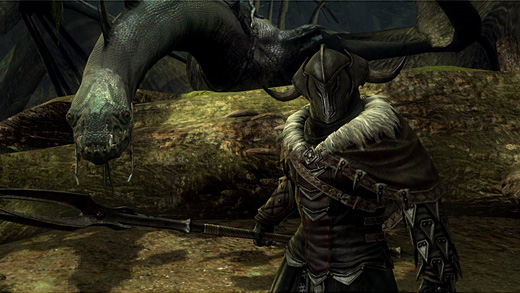 LOW "Defend this point for X amount of time" wears out its welcome fast and early.

WTF Three people defeat an entire siege by themselves. Maybe Aragorn should have taken them with the Fellowship instead.

Usually we identify good videogames by the time that we spend with them. After all, if we spend loads of time playing a game, then it follows that the game is quality, right? Right? I'm not so sure. Even if a game compels us to play it, that doesn't necessarily means that the game is compelling. Spending hours reading Harlequin romances or watching old Transformers episodes is hardly an indication that the media involved is noteworthy. The human mind is easily entrapped.

The ESRB reports that this game contains: Blood, Use of Alcohol, Violence

The release of Baldur's Gate: Dark Alliance for the PlayStation 2—a high-profile PC franchise appearing on a console—is something unusual. This is not entirely new, as the Ultima series made appearances on consoles in addition to its original PC releases. But Dark Alliance differs from the console versions of Ultima in that its gameplay deviates heavily from its franchise-mates on the PC. The other Baldur's Gate games were an excellent example of the PC style of role-playing games—open-ended strategic games based heavily on rules from pencil-and-paper RPGs. Instead, Dark Alliance is a fast-paced, real-time action game where one player controls one character; any attached rules are mainly flavoring for the main course of arcade-style action. Given the incredible difference in gameplay, it's no surprise that rather than attempt to build Dark Alliance itself, franchise studio Black Isle contracted Snowblind Studios to develop it.

I don't know why developers are so averted to bringing computer-style role-playing games (RPG) to home videogame consoles. The Baldur's Gate series is a critically acclaimed, popular title in the PC gaming world. While Baldur's Gate: Dark Alliance for the PlayStation 2 brings gamers closer to the Dungeons And Dragons RPG setting, the title proves that sometimes the apple falls a bit too far from the tree. In short, Dark Alliance doesn't represent the same caliber game to which PC gamers are treated.