And I Swung, I Swung So Far Away

LOW The fresh hole that I’ve punched into my desk.

WTF The inclusion of a scoring system when we already need to play it flawlessly. 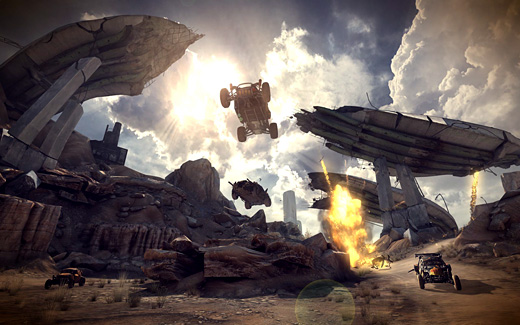 HIGH The Dead City section is a varied high point in the campaign.

LOW The end of the final mission is a turpid joke.

WTF Who races a "time trial" once the Apocalypse has gone down?

Fans of Big Robots are in for a real treat if they happen to own the Xbox console. For some strange reason, Microsoft's black behemoth will be host to a virtual armada of mecha-themed games quite soon. With upcoming titles like Murakumo, Phantom Crash, Robotech: Battlecry and Steel Battalion (to name just a few) there won't be any shortage of missile-launching, jet-boosting, laser-sword-slicing fury. I'm really a bit mystified as to exactly why there will be so many on the Box as opposed to the other two consoles, but whatever the case, the invasion's first wave has just hit.