Contrary to popular rumor, the Best of Community feature I've been plinking away at is still alive and kicking. I had to shelve it for a little while for various reasons, but I have two reviews that need to be posted tonight, and once those are in the can then I'm going to focus my full attention on getting the first installment of Best of Community up and running.

In other news, I never saw this one coming but the PlayStation Portable's Phantasy Star Portable has been getting the majority of my playtime lately. 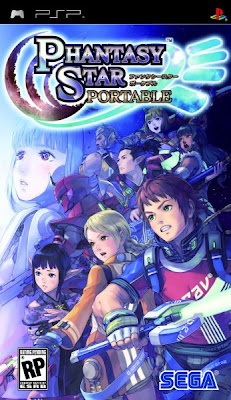 One reason is that I've been on the go much more than usual lately, so the "portable" aspect has a lot to do with it. That aside, it's been a while since I played a good level-grinding loot-fest, so this one is fitting the bill. It's not one of the genre's best and it's certainly not as good as it could be, but it definitely has a certain charm.

Eschewing the more popular fantasy settings of Square's Final Fantasy games and Enix's Dragon Warrior series, Phantasy Star goes for a futuristic cyberpunk feel. This alone made it intriguing to a niche group of gamers who were already falling in love with the genre. Even more impressive was the fact that the first Phantasy Star actually featured a story with relatively well-drawn characters. The first Final Fantasy game featured a party of four non-descript archetypes, and Dragon Warrior wasn't a whole lot better. In this regard, Phantasy Star was relatively ahead of the curve for what was being done in these games. This would continue in the sequels, which would feature even larger stories, more characters, and in the case of the third title, an adventure that spanned generations.

In theory, a game like PSO is every gamer's dream—join up with three other players from other parts of the country (or the world, once the Japanese servers get linked up) and go on an adventure to kill enemies, level up, and maybe find ultra rare weapons and items. However, like most utopias, the world of PSO sounds much better in theory than it does in reality. Unlike games with computer-controlled allies, every other character on PSO (aside from the monsters, of course) is controlled by another human being—complete with all the flaws and foibles most people seem to possess in abundance. These character flaws come into play regularly for some reason, leading those of us who are older, kinder, or just simply polite to wonder just what's wrong with people.

Chi may think that Phantasy Star Online is the beginning of a technology which will uplift and unite the planet into a happy and harmonious future, but I happen to be a bigger fan of Blade Runner than 2001. Personally, I found that PSO was the perfect technology to usher in a new age of missed potential and overrated boredom, rather than something which broke down global barriers and enlightened me.

PSO is videogame with grand ambitions of uniting game players on global scale over the Internet for the purpose of entertainment. This isn't a new concept since the Internet was commercialized, but it never became a reality for a number of reasons.