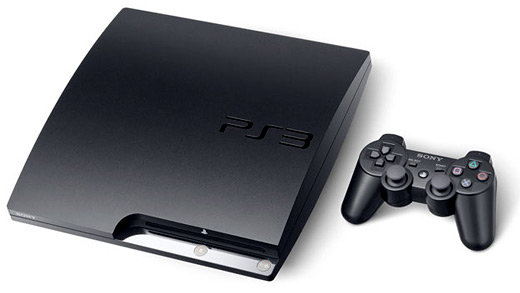 What the PlayStation 3 has lacked until now in its losing battle with the Xbox 360 and Nintendo Wii is a compelling price point.

That looks like it will finally change this September—or maybe before that. Sony has announced it will drop the price of the PlayStation 3 (80GB model) priced at $399 to $299 immediately. That means you can run out right now and get the current PlayStation 3 for $299. What interesting though is that in a couple of weeks (September 1st), you can go to you local electronics chain and get a sexy new, slim version of the PlayStation 3 for $299 as well. On top of that the slimmer version comes with a 120GB hard drive.

A video has been leaked from the June issue of Qore. Qore host Veronica Belmont gets to handle the new PSP Go as Sony's John Koller watches. From the video we learn that the UMD drive is gone in favor of16GB of internal memory that can be augmented with Sony memory sticks and it is Bluetooth compatible. Games like Metal Gear Solid, Jak & Daxter and Gran Turismo are mentioned. We'll have to wait until next week to hopefully see more footage. 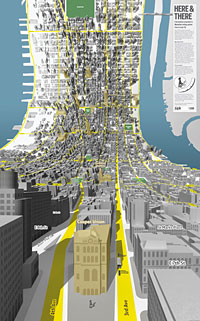 Who could have imagined that the next evolution or revolution in maps would have been influenced by videogames?

Jack Schulze and Matt Webb, creators of the "Here and There" map, were indeed influenced by games—even some not so obvious ones—but games were just one of many influences. (This is probably a good thing given how limited most in-game maps actually are.)

So far it is simply available in poster form, but a 3D-perspective melded with a top down view would seem to have profound applications outside of gaming. Not that gaming wouldn't see a benefit. Gaming worlds are getting bigger and navigating them can be as daunting as navigating the streets of Manhattan for some of us. A "Here and There"-influenced map would be a godsend.

The Army Experience Center is the latest effort by the Army to use games to recruit teens and young adults. This has drawn the ire of parents and anti-war activists.

Variety is reporting that the video game version of the Saw films isn’t as dead as we thought it was.

Brash Entertainment had been originally handling Jigsaw’s first foray into the digital universe when the company abruptly closed up shop a few months back. The game appeared all but dead at that point, with the rights winding up in Lionsgate’s hands. Things have now changed though, with Lionsgate teaming up with Konami to resurrect the title. The game is still slated for a fall release (keeping it in line to appear around the same time as the sixth film in the franchise).

I wasn’t particularly interested in a Saw game prior to this point (it seems like its ripe with the potential to suck balls), but Konami stepping in gives me a slightly more positive outlook. Konami has a decent track record with horror games (they’re the guys behind Silent Hill and Castlevania) and maybe they can bring some interesting elements to the project. My area of concern, though, remains the fact that the release date is still this fall–meaning they’re probably taking what Brash had already created and just finishing the project as opposed to building a game from the ground up.

I guess we’ll all find out if the game is worth playing before the end of 2009.

When will Final Fantasy XIII ever be released?

It's not a good sign when a 2008 release date, slips to 2009 and now 2010. Making things worse is the exclusivity deal Square-Enix struck with Microsoft—FFXIII would be released simultaneously on the Xbox 360 and PlayStation 3 outside of Japan—Square-Enix has announced that development wouldn't even begin on the 360 version until the PS3 version was finished. How much does that add to development time?

Just because you can do something, doesn't mean you should. Someone or someones decided he or she or they didn't like playing Mirror's Edge in the first-person and hacked the game (PC version) so that it could be played from an over-the-shoulder viewpoint. That's all well and good as long additional steps were taken to fix any side-effects of the switch. But none were. Instead, we see a character model that was never made to be seen during normal gameplay instances and as a result looks pretty laughable.

What a way to start the new year. 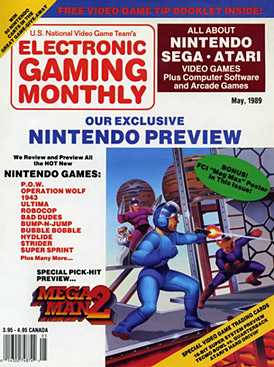 1UP.com was a very popular gaming website, full of veteran and new gaming journalists and home to my favorite audio podcasts and video podcasts. It was one of the few online gaming sites that managed to flourish after the dot com debacle of the 1990s—some will remember that it was born from much of the remains of Gamers.com. It was under the umbrella of magazine publisher Ziff-Davis, a publisher that at one time published almost every magazine that I bothered to read.

But 1UP.com wasn't making money. Or least it wasn't making the kind of money that Ziff-Davis needed to keep the network and all of its sister websites up and running. Rumors had been swirling for years that Ziff-Davis was in financial trouble, but nothing ever came of them. In fact, many just believed it was the print magazines that would take the fall. And they did, but as we now know, the online outlets would not be spared.

Word dropped yesterday, but the aftershocks are still resonating in game journalism circles. And it is interesting to watch because though from competing outlets, many of the 1UP Network staff had close relationships, both working and personal, with other writers. While reading the coverage from these writers, you can't help but feel their pain and anger while writing about their peers and friends who are now out of work.