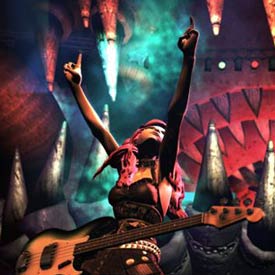 Celebrity culture and status seem to be at an all-time high in pop culture right now, and musicians are often seen in this sweeping spotlight of fame. Kids have always fantasized being pop stars; the likes of Disney keep pumping out fantasies of fame through musical vehicles like High School Musical, Hannah Montana and Camp Rock; and American Idol chugs along season after season. Harmonix rides that wave to produce the next vehicle in the musical fame fantasy-land: Rock Band.

According to ESRB, this game contains: Lyrics, Mild Suggestive Themes