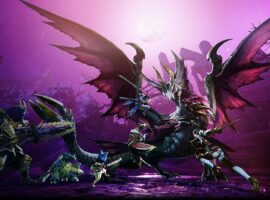 HIGH AI companions riding monsters facefirst into walls is a joy to behold.

WTF That ballista substitute in the endgame is totally awesome.

WTF How many goddamned Great Izuchi tails am I gonna need here?

HIGH The new mounts are a fantastic addition to the formula.

LOW Environmental slope attacks not triggering when they should.

WTF Shouldn’t there have been a Dragon’s Dogma crossover event by now?

Monster Hunter World’s first (and supposedly only) major expansion, Iceborne, is set to release on Friday, September 6. Given that the base game remains Capcom’s best-selling release to date – having finally connected with a mainstream audience in the west – I imagine that a lot of people are itching to jump back in. But, based on what I’ve played, you may want to hold off and consider whether or not you’re prepared.

HIGH  The moment-to-moment exhilaration of fighting a gigantic monster can still feel amazing.

WTF The localization’s fourth-wall-bending goofiness is frequently obnoxious, complete with a literal “git gud” at one point.

WTF Unskippable cutscenes? In 2018? In a game no one plays for its story?

HIGH The absolutely exquisite melding of combat and exploration.

WTF So hey, looks like I was the first person in the world to get the Platinum trophy. Neat!

Beauty Is More Than Skin Deep

HIGH The gameplay is totally up to scratch…

LOW  …The rest of the package, less so.

HIGH Locking a boss in place and shredding it to bits with the chain whip.

WTF Double amnesia? At least they poke fun at it…