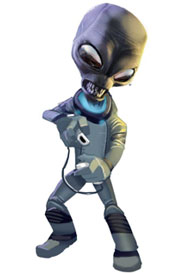 But I think that the greatest weakness of Big Willy Unleashed is its setting. The first Destroy All Humans! was set in the 1950s: a time when America was still processing what happened in Nazi Germany and the threat of the Cold War, partly by making movies about hostile aliens. In the first game, the humans’ barely-concealed anxiety about a Communist takeover fits perfectly with the alien invasion going on right under their noses. By the 1970s, alien invasions had fallen out of favor in scary movies, and the enemy was much more likely to come from our own ranks.