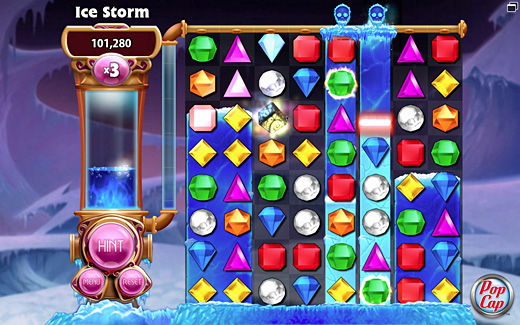 LOW The anxiety and dread elicited by the Ice Storm Mode are deadly.

WTF I have no idea how anyone could match six gems at once without the use of Lady Luck's hands.

So you're Nintendo. You've been sitting atop the handheld mountain for like 20 years. During that time you've seen challengers come and go—Atari (Lynx), NEC (TurboExpress), Sega (Game Gear), SNK (Neo Geo Pocket Color), Bandai (Wonderswan) and finally Sony (PlayStation Portable). All of these devices possessed features and technology that surpassed anything Nintendo offered, but Nintendo still outsold them and did so with a single, very simple philosophy: release cheap, existing technology with a long battery life, at a low price. It worked so well that with every new competitor, Nintendo would fall back on that practice.