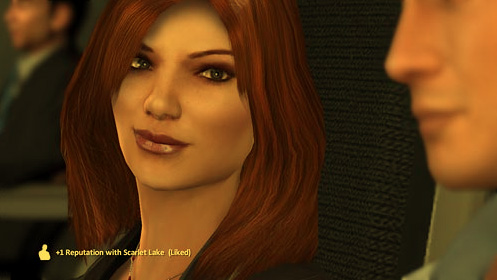 Or: Why I am dreading Alpha Protocol.

…some video games allow the player character to have sex with NPCs; even more allow the player to have romantic relationships with NPCs. What the vast majority of these games inevitably do is present relationship mechanics that distill the commodity model down to its essence—you talk to the NPC enough, and give them enough presents, and then they have sex with/marry you. This design approach is extremely simplistic and perpetuates the commodity model of sex—the player wants sex, they go through certain motions, and they are "rewarded" with what they wanted (like a vending machine).

In Sexuality and Homophobia in Persona 4 from Gamasutra, Samantha Xu examines the tension between Persona 4's "rough-and-tumble teen" Kanji Tatsumi and his flamboyant alter-ego:

Kanji is feared by the locals and maintains a confrontational machismo toward the other characters throughout the game. He is a loyal son and employee at his family's textile shop, and it's not until the debut of his alter-ego Shadow Kanji that we are made aware of his inner sexual turmoil.

Xu looks at how homosexuality is viewed in Japanese culture and interviews people at Atlus USA who worked on Persona 4, game journalists and Sex in Video Games author Brenda Brathwaite. Brenda likes many things about Kanji's portrayal, but one thing she dislikes is "the game's juvenile nature in dealing with his sexuality."