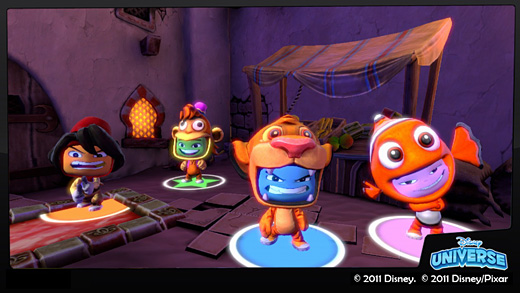 HIGH Seeing numerous callbacks to Disney films in each level.

LOW Not having my oldest son around to play co-op with me.

WTF The costumes really don't have any unique abilities?

Want to make your Wii graphics shine? Put them next to Nintendo 64 graphics.

Seriously, in one frame I was looking at a long black "thing" from the Nintendo 64 version of the GoldenEye 007. And I only realized it was a helicopter because I had the volume turned up and could hear the sound of whirling blades.

Fans of the original should take a look as it would give you pause. After all Rare isn't going to make a HD update, Nintendo doesn't want to make one and Activision holds the James Bond license. If you want to get an update to the Nintendo 64 classic, you probably can't do better than this remake.

Sphinx and the Cursed Mummy sat in my "to-play" pile for months, probably more than a year if I wanted to be accurate about it. I'm a big fan of third-person adventure games, and after reading Mike's opinion, I thought it was a safe purchase on the cheap. The problem was that I never felt like playing it. The box art is very mediocre and not the sort of eye-catcher that jumps out from the shelf, and with an onslaught of other titles that I had been anticipating or that needed reviews, it never got its turn at bat.

According to ESRB, this game contains: Blood and Gore, Language, Simulated Gambling, Violence

If reviewing videogames has taught me one thing, it's that I really shouldn't be impressed by a good idea. All too often games start with a great idea, and then run it into the ground with terrible execution. Bet on Soldier: Blood Money is one such game. It takes the relatively exciting idea of brutal murder being structured as sport and televised as mass media entertainment, and does absolutely nothing interesting with it, just like The Killing Game Show, Flashback, and Headhunter before it.

No one is ever going to confuse Sphinx with Zelda, but that doesn't mean this quirky little action title is without merit. Sphinx may not succeed in all the areas of game development, but it does more than enough things right to justify spending some time with it. Gamers who enjoy lighthearted action with a pleasant mix of combat, puzzle-solving, and platforming elements will find Sphinx an interesting diversion.

In the summer of 2003, gamers bore witness to a spectacular step backwards for the mainstream acceptance of video games. The one-two punch of the unfinished videogame Tomb Raider: Angel Of Darkness and the unwatchable movie Lara Croft: Tomb Raider: The Cradle of Life. The awful Angel Of Darkness is a perfect example of a game rushed to release. After three years without a new title, the most visible franchise in gaming was in danger of being forgotten.