Downloaded Burn, Zombie, Burn! from the PlayStation Network a few days ago, and I'm quite done with it now. Honestly, I really don't understand how he can be so hard to make a game about killing zombies. It seems like an absolutely simple thing to do, yet I can't think of a game that has nailed it. Burn, Zombie, Burn! is no different. 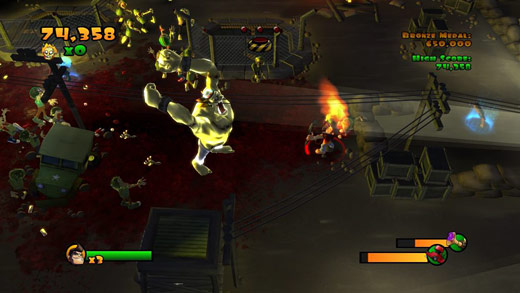 Basically, the game is like Robotron 2084 or Smash TV at heart. One hero, hordes of zombies, and a bunch of weapons on one screen. The difference between Burn, Zombie, Burn! and those two is that that those two are classics—I sincerely doubt that anyone will remember Burn, Zombie, Burn! existed in six months, let alone a few decades.

Although I will admit being disappointed that there was only an Arcade and Challenge mode (No story mode here. Bah.) the game would have been just fine regardless except for the fact that the developers made some really unusual choices that have a significant, depressive effect on gameplay.

I'm a little embarrassed to admit that I still don't own a PlayStation 3. I'm one of those guys who picks up every console in every generation–then when something exclusive releases, I don't have to give a crap. The PS3, though, has remained a bit out of my price range and didn't have anything I was dying to play for quite awhile. That's changing now (well, not the price part, but the games I want to play half) with MGS4, Disgaea 3, and now, Burn, Zombie Burn!

Looking at the screenshots for this title, the first thing that pops into my head is "damn, this looks like a next-gen version of Zombies Ate My Neighbors"–which was a great 16-bit era game that appeared on the SNES and Genesis.