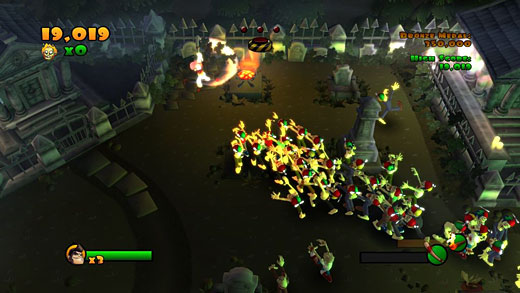 As a card-carrying lover of all things zombie, and a huge fan of the old 16-bit game Zombies Ate My Neighbors, I've been keeping tabs on Burn, Zombie Burn! since I first heard about it last year.

The game, from developer Doublesix, features a lead character named Bruce (hurray for more Bruce Campbell references in video games!) who works through multiple stages slaughtering hordes of cartoonish zombies. The title looks to feature parallels between not only Zombies Ate My Neighbors, but also the classic Robotron. The idea is to gather huge masses of zombie together and slaughter them all at once for huge scores and bonus multipliers. I'm so sold on this game that it's not even funny…

Doublesix has (according to Kotaku) planned a big celebration for the game's release—they've lined up competitions (with trophies) for high scores and prizes like "horror themed holidays" (no clue what that might be—but it sounds cool) and shirts, artwork and other prizes. The game will also feature some downloadable extra content such as a strategy guide, music, and an 8-page comic book.

Burn, Zombie Burn! is a PlayStation Network exclusive and will be available for download on March 26th. Expect a review sometime not long after that.