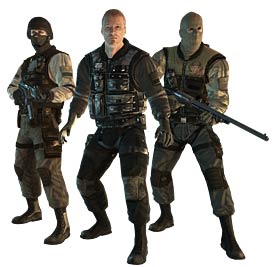 I can't believe this game was developed by High Moon Studios. Two levels in I stopped the game, went back to the Xbox Dashboard and reloaded to make sure I'd seen what I thought I saw. Yes, it was made by the same people who made Darkwatch. What did I learn? That while a development studio's previous work can usually be a good predictor of their performance in the future, just because some developers turned out a terrible game doesn't mean that they won't turn around and make a fantastic one the next time out.

According to ESRB, this game contains: Blood, Mild Language, Use of Alcohol and Tobacco, Violence