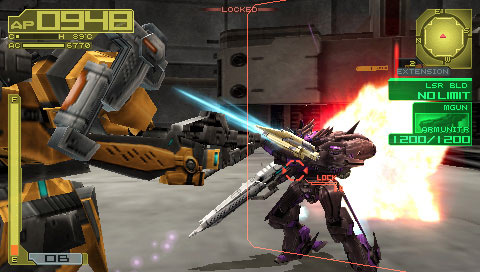 LOW Being sliced apart by beam swords for relying too heavily on my trusty flamethrower.

WTF The game has more functions than the system has buttons!

This time around, FromSoft gave their high-tech third-person robot battling a much-needed shakeup in the transition from PS2 to PSP. The bulk of the game is intact with its insane amount of weaponry and parts to tinker with, the mech construction and fine-tuning still the same art form that it ever was.

If you're reading this review now and have even the slightest interest in checking out what this long-running series has to offer, do yourself a favor and a check out any (and I mean any) of the other games in the series before trying Nine Breaker. In fact, just forget that this game even exists. Without a doubt, this is the worst Armored Core that's ever been produced.

Publisher Agetec may want to get away from the "same-old, same-old" reviews the Armored Core series usually receives, but it's going to take more than a little switcheroo in the title to get the job done. Silent Line is the seventh entry in developer Fromsoft's long-running cult series, but there's really very little to differentiate it from the others previously released. This can be viewed as either a good or bad thing depending on your experience with (and love of) the games, but as a seasoned veteran of all seven, I'm more than ready for this franchise to receive a complete and total overhaul.

How many times can one person play the same game? At least six, evidently. While I still call myself a fan of FromSoft and their Armored Core series, I think I've finally reached my breaking point. I've taken all five of the previous games to 100% and beyond. Its safe to say that I know these games inside and out, and there's no doubt that I've enjoyed being along for the ride.

While the hardcore fans of mech games will enjoy this, the steep level of difficulty that this title presents might turn off casual gamers.