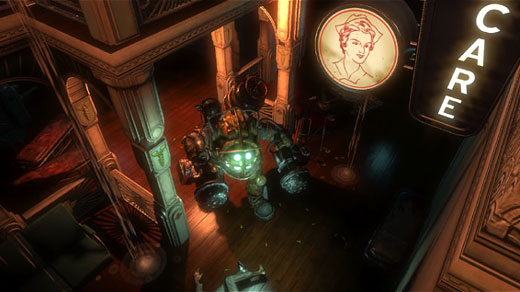 From the moment BioShock began, I knew I was in for something special. Its opening sequence, placing the player in the middle of the Atlantic Ocean surrounded by the fiery debris of a sinking plane, is one of the most dramatic prologues I've ever seen in a videogame.

A port of a PC first-person shooter (FPS), Prey is all about running around and blasting things with a number of different weapons and giggling at the aftermath as heads explode in fountains of blood, bone, and brains. Featuring a sci-fi setting (as opposed to the other standard of the genre-a historical war from human history), the title evokes memories of both Doom 3 and Half-Life.

Prey's marriage of scientific and spiritual might not be the best fit, but convincing environments, dynamic gravity, and mastery of genre basics assure its status as a pleasantly solid entry into a very crowded field.

The Godfather is generally considered to be a better movie than a book, The Dead Zone is better served as a television show than any previous versions, and even though Battlefield Earth is one of the worst films ever made, it's still better than the novel it's derived from. What I'm getting at, in a rather roundabout way is that, perhaps for the first time ever, a videogame is actually better than the book or film that preceded it. That game? The Da Vinci Code.

By and large, I find Mike's review of Oblivion to be nearly as flawless as the game itself. Everything he said in his main review about the game's beautiful graphics, playability and scope I agree with wholeheartedly. It really is stunning to walk all the way to the mountains at the end of the map, then turn around and be able to see the main city in the distance. Where his opinions and mine diverge, however, is on the subject of the game's lack of focus.

Writing this review proved to be a great deal harder than I'd imagined. I think there are two reasons why: First, Oblivion is a huge and multifaceted game. There's a lot of ground to cover and it's easy to concentrate on the few negatives while skipping over a lot of the positives. Second, it's really hard to talk about the game without referencing Morrowind regularly.

According to ESRB, this game contains: Blood and Gore, Language, Sexual Themes, Use of Alcohol, Violence