A Most Dangerous Game 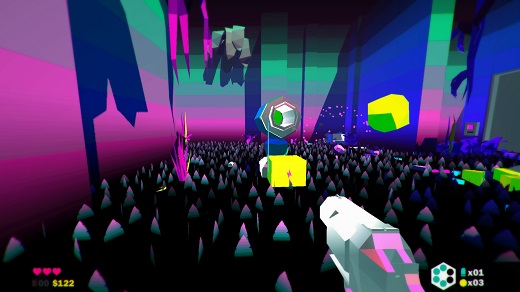 WTF If a company gives their janitors firearms as a part of their standard equipment, what are they cleaning up?

While many games build these expectations through carefully-crafted stories and world designs, the roguelike genre bypasses these prescriptive conventions in favor of chaos. These games use procedural content generation and permadeath to form the spine of their play, forcing players to use multiple sessions to learn (and eventually exploit) the rules that generate the game's environments as much as the resulting environments themselves.

As such, Heavy Bullets stands at the volatile intersection of buzzwords like "indie," "first-person shooter," and "roguelike" that, improbably, describe Devolver Digital's release. But, even when Heavy Bullets can't pull all of these disparate elements together, it gives an irresistible hint of what it looks like when it can.

As one might expect from a roguelike, Heavy Bullets skips any sweeping storyline for a simple premise: players take on the role of a janitor for Highrise Hunting Grounds, a company that specializes in simulated safari adventures for the corporate elite, and all of the janitors have been tasked with fixing a malfunctioning, murderous security system for a $5000 reward.

The anti-corporate smirk behind Heavy Bullets's theme isn't nearly as evocative as its presentation, however, which uses a blend of hyper-saturated colors and low-polygon graphics that I found immediately engrossing. Every level is rendered in a cold, luminescent neon, as though the Hotline Miami team decided to re-create Dire Straits's classic "Money For Nothing" music video. Beyond the visuals, Doseone's soundtrack (available on Steam and Bandcamp) provides a dense jungle of thumping drums blanketed by chiptune bleats and synthesized wails.

With such an audacious audio-visual experience at its forefront, Heavy Bullets wisely sidesteps the temptation to dive into complex mazes with its procedural level generation. Instead, it keeps things simple by producing a series of long corridors as levels, with each one composed of a series of pre-defined set pieces. These set pieces re-use layouts in the same way that other roguelikes, such as Spelunky, re-use room plans, mixing open fields with winding hallways and allowing random chance to determine the variations of enemy types and placements that fill in the space. 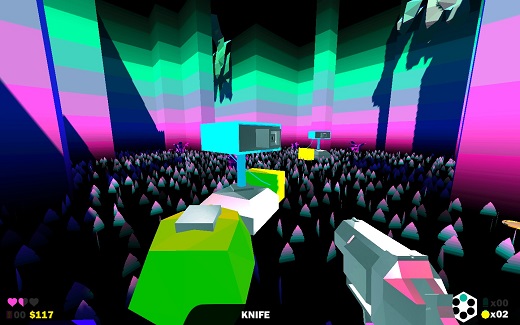 This linearity creates an environment that focuses more on approachable combat encounters than meticulous interrogation of the space, though there are still some aspects of exploration left intact. For every dead-end nook that hiccups out of the level generation, there's a hidden wall or a secret area tucked away from the critical path with a useful item resting inside.

The combat that takes place in these levels centers on an odd, but catchy gameplay hook: the titular Heavy Bullets effectively function as reusable arrows that must be retrieved and reloaded, one-by-one, into their revolver after every shot. It's a concept that only seems justified Because It's A Video Game, but it still adds a surprising amount of tension to by making accuracy critical and ammunition scarce.

Naturally, this tension is ratcheted further by the enemies that prowl around this malfunctioning safari, and their swift and aggressive pursuit will force players to adapt or fall prey. The enemy designs are economical—every enemy has a distinctive sound cue, a weakness to learn, and not much more than that—but even though their behaviors are predictable, the threat of permadeath makes each enemy a credible threat.

For those who need help to drive these enemies back, the game offers a number of consumable secondary weapons in addition to the revolver, such as homing bombs or rockets. These items, along with other upgrades, can be found or bought from shop kiosks that are sprinkled throughout every level.

Unfortunately, Heavy Bullets's placement and configuration of these shop kiosks is not ideal. Due to the limited ammunition and a small health bar, players have to rely upon upgrades purchased from the shop to stand a real chance at completing the game. Since the shop inventories are randomized, there's no guarantee that the shops will be stocking the right weapons when they're needed. To add insult to injury, these shops continually raise their prices as the game goes on, creating a harsh item economy that can dramatically cut into the margin of error as the player progresses.

Thankfully, the Bank shop provides a way to work around these bumpier elements through a consistent inventory of shop discounts, as well as a multitude of ways to deposit and withdraw funds and items across multiple sessions. It's not a perfect solution, but its incorporation is still a welcome decision.

In Heavy Bullets, I will never know if any given run will be the one where all of the pieces finally fall into place. I will never know if the shop kiosks are going to be filled with junk, or if a particularly cruel turn of the level generation crank will churn out a maddening field of overlapping turret fire. But, despite all of the rough edges of its procedurality, I can't help but stay the course and challenge my expectations. I press on with Heavy Bullets because its luminescent vision sculpts that chaos from noise into a signal, and creates a deconstruction and resurrection of an idealized game that I'll never get to play, but never get tired of chasing. Rating: 8.0 out of 10.


Disclosures: This game was obtained via publisher and reviewed on Steam for PC (v1.0.2). Approximately 32 hours of play were devoted to the single-player mode, including 18 hours of play in Early Access, and the game was not completed. There are no multiplayer modes.

Parents: At the time of this review, Heavy Bullets does not have an ESRB rating and contains no questionable sexual or violent content, though a handful of the monster designs and behaviors (e.g. snake and imp) may potentially be frightening for smaller children.

Deaf & Hard of Hearing: Heavy Bullets does not use sound as a part of its narrative, but it leans very heavily on sound cues in gameplay to telegraph monster behavior. Since health is in short supply and many of the monsters move fast and aggressively, it is almost certain that players with a hearing disability will have a much more difficult play experience.