How I tried to stop worrying and love the drift 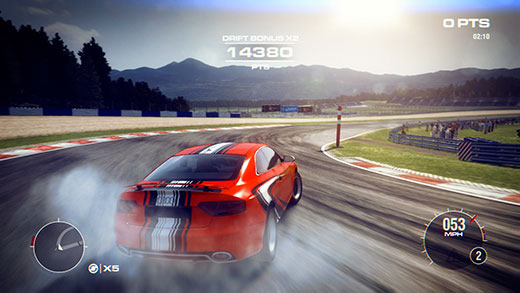 Despite the relentless drive for innovation in gaming, I've found that the most appealing aspects of racing titles have remained the same over the years. The exhilaration of pure speed, from searing straightaways to the centripetal pull of the turns, still burns between the white dots on the black screen of Atari's Night Driver, just as it shimmers in the high-definition chrome of Gran Turismo 5.

For me, it's the accoutrements which have changed and evolved over time. Many of these shifts have been made in deference to big names like GT and Forza, which have incorporated aspects of intense simulation and obsessive car collection into their experience. 2008's GRID was a fine example of how a polished, stylistic presentation of these secondary elements could be passed off as substance. GRID 2

, on the other hand, puts a different coat of paint on these trappings and, in doing so, provides some insight as to why its less-traveled road is so darn bumpy.

In case you missed the angry internet forums when it was released, GRID 2 is not a "True Racing Simulation". (Never mind that the series has made its mark with the decidedly-unrealistic time-rewinding Flashback system) A fair amount of this criticism is fueled by the way that GRID 2's "TrueFeel" handling model seems to encourage wheelspin, and even manages to send grippier, open-wheel cars drifting around wider corners.

It's unfortunate that GRID 2's erratic AI doesn't seem prepared to take advantage of what this bombastic handling model has to offer. The AI still occasionally pulls off emergent moments like generating crashes ahead of the player on the track, but more often than not, the AI is only noticeable when it's nonchalantly nosing someone out of a perfect drift mid-turn or patiently waiting for the player to shunt it into outer space. The AI doesn't seem to have any middle ground, and even with a full supply of Flashbacks and damage modeling turned off, these odd shifts of aggression can turn any event into a laborious loop of trial-and-error rehearsal.

Thankfully, the tracks in GRID 2 accentuate the contours of its handling model quite nicely, mixing in elevation changes and varying turn widths to entice different drifting strategies, as well as other, more technical driving tendencies in open-wheel vehicles. The environment designs that adorn these tracks are absolutely gorgeous as well, effectively using a variety of color palettes and road surfaces to provide a compelling sensorial experience.

Once off the track, the thrill of the throttle doesn't come with. The narrative framing for the single-player campaign is a ponderous storyline that charts the rise of a new World Series Racing (WSR) league. Patrick Callahan—no, not that Callahan—recruits the player into his fledgling league because of his (or her) burgeoning social media following, inexplicably earned by finishing the very first race in the campaign.

GRID 2's campaign takes this awkward plotline even further by tying the player's advancement to the growth of the WSR with Fans: rather than paving your way through the campaign with cash from wins during the season, you accumulate Fans and, as the number of Fans grows, the WSR unlocks additional races and seasons to race through. Even the corporate sponsorships, which are carried forward from the first game in the series, now puzzlingly reward you with Fans rather than cash, as though the WSR's audience is more interested in branding than how you perform on the track.

To add insult to injury, the transition from cash to Fans also dramatically reduces the player's control over their advancement as a driver. Rather than offering different cars to purchase, GRID 2 provides a steady drip feed of new cars throughout the single-player campaign, which quickly leads to an overstuffed garage full of redundant and under-used vehicles. When GRID 2 pairs this largesse with the campaign's tendency to bounce around between race formats, many of which are often restricted to specific cars or car types, it becomes difficult to develop any sort of feel or real familiarity for a specific car over time.

is a fine racing game on the track, but it's a questionable package when taken in its entirety. For those willing to patiently sift through all the cruft, it's a surprisingly satisfying, if sometimes frustrating, arcade racing experience. Nearly everything else that surrounds the actual racing suffers from the disease of "more:" more races, more cars, and more narrative contrivances that end up bloating the experience, rather than enhancing it. The ability to enjoy this sequel will be directly proportional to the ability to patiently endure all of its distractions and simply follow its drift.  Rating: 7.0 out of 10

Parents: According to the ESRB, this E rated game contains no objectionable content in its single player mode. The multi-player modes, as always, allow for the possibility of objectionable user-generated content.

Deaf & Hard of Hearing Gamers: There are no explicit sound cues that are required for completing any given race – there are occasional voice-overs from your spotter as you make your way around the track, but these interjections serve to provide more flavor than any sort of critical gameplay communication.