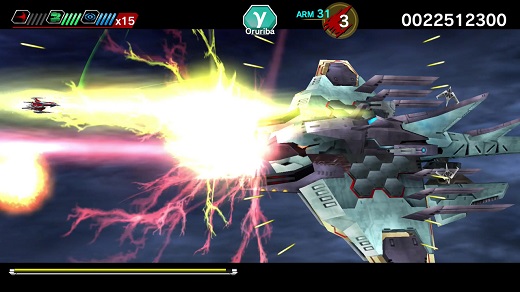 HIGH A sharp set of mechanics and modes offers many satisfying ways to play.

WTF Why does attract mode show multiplayer when the game doesn't support it?

There's a suspicious word attached to the marketing copy for the recent scrolling shooter Jamestown: "neoclassical." It's a clever term that concedes that the game it adorns—and the scrolling shooter genre as a whole—might be so far removed from contemporary tastes that its regressive tendencies can be seen, charitably, as a deliberate artistic gambit.

After all, other indie games are simply satisfied with being labeled as indie or even, heaven forbid, retro, but scrolling shooters are so indebted to the conventions of gaming's past that one could be forgiven for seeing the genre and its adherents as being dogmatic. When the otherwise-interesting Sine Mora dared to feature exposition and randomized power-ups that discouraged obsession with higher scores, the SHMUPs forum community—the very segment of consumers that it was ostensibly meant to appeal to— effectively turned their nose up at it.

Thus, it's a tough marketplace that welcomes Dariusburst: Chronicle Saviours into its tendrils., and it's probably not an accident that the last retail Darius in North America was Taito's imaginative G-Darius for the Playstation in 1997. With its offbeat Zuntata soundtracks and strange preoccupation with fish iconography, this series of horizontal shooters has been a niche within a niche for decades. Chronicle Saviours offers more than just eccentricities, however—with smart design that accommodates a number of different player types, it attempts to broaden the expectations of what a scrolling shooter can be.

As a compilation of two other Japan-only Dariusburst games (a 2009 PSP release and an arcade title) Chronicle Saviours offers a number of ways to dig in. The arcade content is presented in its original form as "AC Mode" where the primary campaign is a branching path through a series of three levels, with each level offering a more or less difficult variation.

The "CS mode" trades the three-level branching path for an ongoing series of arranged collections, each one with different levels and boss fights. This structure provides the game with more opportunities to mix things up in terms of pacing and structure—one segment may be a short boss rush, while the next may be more of a marathon, with six or seven different pieces to work through.

From a technical standpoint, CS mode offers the smoothest experience of the two. The letterboxed aspect ratio in AC Mode is not successful, as it makes much of the text range from hilariously tiny (on the Playstation TV) to completely unreadable (on the Vita). To add insult to injury, there are multiple menu cues and footage in the attract mode that imply a multiplayer capability that just isn't here. CS Mode gives players a better presentation, if only because it frames the content in an aspect ratio that's properly scaled to the screen of the Vita.

All of these options wouldn't do any good if the game itself wasn't engaging, though, and Dariusburst thankfully clears that hurdle.

At the forefront of play is the Burst Beam, a costly blast that's fueled by the destruction of enemy units. It's a robust mechanic with a wonderful dramatic arc: careless use can momentarily wreak havoc while draining the player's burst gauge in a hurry, but perfect application against an enemy wave can refill that gauge in stride and give more advanced players a powerful attack that's effectively free. The Burst Beam is such a rich design element that it could easily overshadow the rest of the game, but Dariusburst combats this with a careful blend of genre staples.

The scoring mechanics are simple, but effective—completely destroying an enemy wave nets a score bonus, and players are often challenged to handle multiple waves of enemies at once. As usual, players can collect upgrades to their missiles, armor, and primary shot but, depending on how far along they are on the upgrade path, the primary shot can also absorb other opposing bullets of the same type.

To deal with pesky enemies that sneak onto the field from behind, Dariusburst provides a button for reversing fire, which also comes into play for multi-phase boss battles where the player will be required to attack the boss from all angles.  Players can also increase the firing rate of the ship by flying closer to targets, rewarding aggressive players that are willing to trade safety for efficiency.

Even though these mechanics are hardly unique, Dariusburst does a great job of presenting and escalating their use throughout the variations of its content. For those looking to engage with the game on a sheer audiovisual level, though, there's not as much to hold onto. Zuntata brings its unique brand of alien wailing to the proceedings, of course, but an alarming number of the environments never match the soundtrack's scale or ambition. There's too much black, brown and gray in this space game, especially in contrast to how evocative the Darius series has been in the past.

Ultimately, Dariusburst: Chronicle Saviours may be too careful for its own good. For all of its accommodations to different types of play, this is a game that still leans heavily on the conventions of shooters past. It's good in subtle ways that may not be readily apparent to someone who isn't already familiar with this sort of game, but maybe that's what makes a "neoclassical" game feel alive—old ideas made new through defiance of obsolescence. You say you need one last holdout against impossible odds? All I need to know is how to fly. Rating: 7.5 out of 10


Disclosures: This game was obtained via publisher and reviewed on the Vita and Playstation TV. Approximately 22 hours of play were devoted to the single-player mode, and the game was completed (1cc for the easiest AC mode path, multiple credit-fed clears for other AC paths). There are no multiplayer modes.

Parents: According to the ESRB, this E-rated game contains fantasy violence. There are explosions and various forms of weapons fire from spaceship combat, but there's nothing about the presentation of these elements that's excessively violent in any detail.  This should be safe for virtually anyone that's interested in the source material.

Deaf & Hard of Hearing: There are many moments in Dariusburst where the screen is filled with enemy ships or projectiles and it can be difficult to process all of those factors without their corresponding audio cues. The most critical audio cue—the brief chirp that sounds whenever you take damage—is accompanied by a subtle color change to the player's forcefield, but this may be hard for players to pick up when they're preoccupied with parsing everything else on the screen.

Remappable Controls: Certain functions are remappable. There's no way to alter controls for ship movement other than deactivating the left analog stick, but all other actions (shooting, burst, fixed burst, and turn fire) are fully remappable.