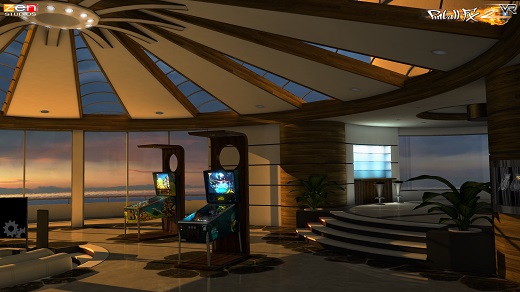 My experience with pinball more or less stems from listening to The Who's Tommy, but I can honestly say I enjoyed what I was able to play of Zen Studios' Pinball FX2 VR.

Releasing on March 28 for the Oculus Rift, Pinball FX2 VR comes with three tables to start. These three, Mars, Secrets of the Deep, and Epic Quest, sit in a beachfront room that looked like it was been designed by someone from the '70s if they were asked to design a living room from the future. Turning my head let me take in this gallery before I picked the table I wanted, and the setting would adjust accordingly.

Each table was fully realized in VR – they weren't just screens sitting there. I could look down and see the cabinet, tilt my head and see the sides, see the buttons on the flanks. While I couldn't walk around to admire the entire machine, it almost felt like I could. More than once I would actually reach out to smack the machine in an attempt to save my ball, only to have my hand hit nothing. The immersion was certainly there, even if the machine physically wasn't. 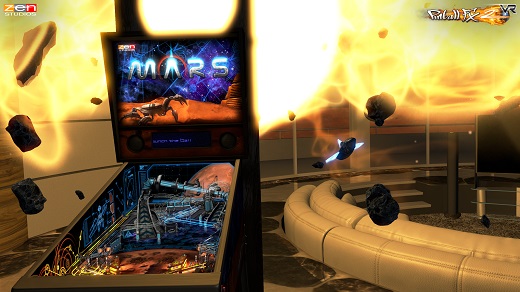 Mars is by far the simplest of the three and the one I spent the most time with. Selecting that table changed the beach overview to a red, crater-marked landscape with tiny asteroids orbiting around me. Little rocket ships would buzz by each time I lost a ball and spider-like robots would fly about the table doing whatever spider-like robots do.

Secrets of the Deep sunk the room underwater, complete with sharks and jellyfish floating nearby. This table is more complex than Mars with a greater number of ramps, bumpers, and a crane that would pick up my ball when the conditions were right, tossing it somewhere else.

Epic Quest rounds out the initial three tables with a fantasy theme, complete with a cartoon knight that likes to pop out from behind the table from time to time with the sole aim of creeping me out. Honestly, this guy went to the Burger King school of being an unnerving mascot. When I was able to pull my gaze away from the knight's cold, lifeless eyes, I could see a two-tiered playfield with flippers on top and bottom. When I wasn't worrying about whether or not Sir Stalker was going to put his mace into my skull, I was having a blast.

While Pinball FX2 VR doesn't quite capture the feeling of being in Flynn's Arcade during the heyday of the '80s, it does come pretty damn close to replicating playing on a physical table.  I lost track of time during the demo, not realizing thirty minutes had passed by the time I took the Rift off. If you style yourself a pinball wizard and have access to the Rift, I would suggest giving this one a whirl.