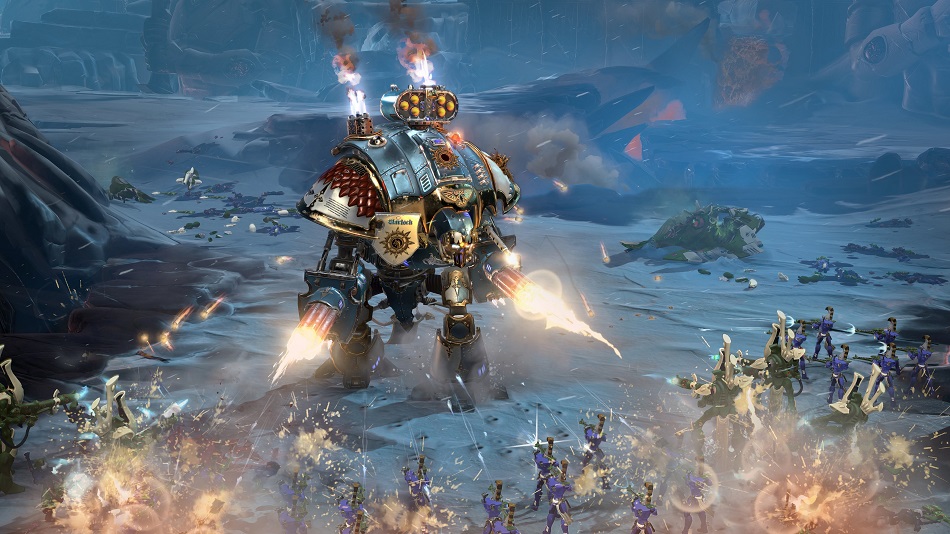 HIGH Rocking out to an Ork Waaaagh!

LOW The simplification of several mechanics.

WTF What happened to all those custom kill animations?

Warhammer 40,000: Dawn of War III attempts to keep the character-heavy focus of the previous game while bringing back the massive armies and base building RTS staples that were present in the first, but missing from the second. Unfortunately, in their attempt to fuse the two prior styles together, Relic dumbed-down aspects that made this real-time strategy series great. The result is a beautifully gory but simplistic, and ultimately dull chimera of what Dawn of War once was.

The single player campaign is pretty standard when it comes to 40K lore. Three races (in this case, Space Marines, Orks, and the Eldar) are duking it out over a space MacGuffin that appears from another dimension every thousand years. The plot isn’t much to write home about even by 40K standards, but it does the job well enough and the voice acting is spot-on — imagine Shakespeare writing direct-to-video 80’s action movies. It’s dumb, but I’ll be damned if I don’t love it.

Every side offers its own unique playstyle. Space Marines are all about heavy weapons and heavy tanks. While they are the most “standard” of the three, they do have the ability to deploy troops directly into the middle of a fight via orbital drop pods.

The Orks are all about numbers and a horde mentality. They live for scrap produced either by their defensive towers or left behind from destroyed building and vehicles. With this scrap, they can upgrade themselves or even create new units, which means an Ork force can actually end up stronger after a fight finishes.

Finally, the Eldar are about mobility and specialization. Their buildings can teleport and create gates between two of them to bring entire armies across the map. Additionally, Eldar units are extremely dedicated to their roles, be that long range combat or hand-to-hand, but suffer when they are caught outside of their masteries.

Sadly, even with how differently each group operates, playing the campaign is just flat-out boring. The missions bounce back and forth between all three factions, so it’s hard to build a progression tempo between them. By the time I felt like I had fully figured out a race, the mission was over and it threw me into the role of another. This disjointed form of storytelling works sometimes, but it’s more annoying than fascinating here. 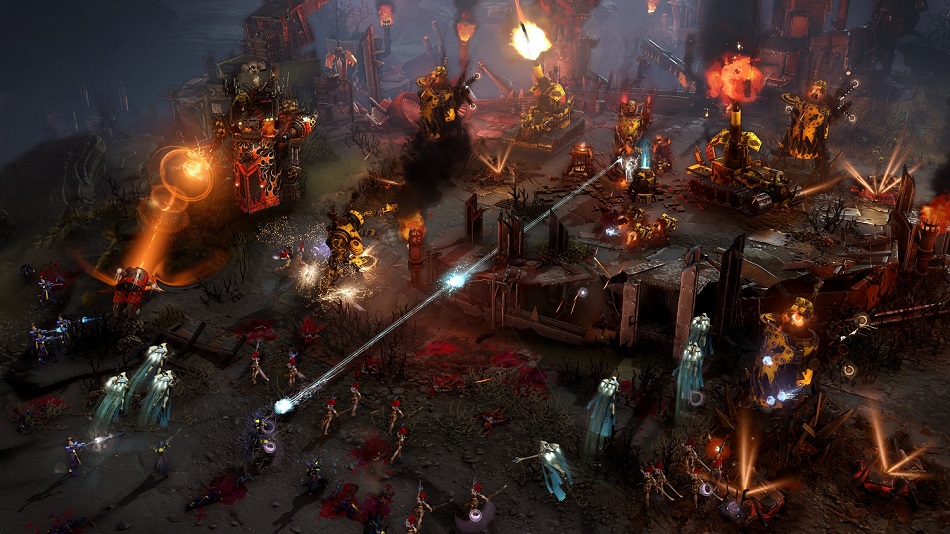 As I alluded to in my preview, Dawn of War III wears its MOBA influences on its sleeve. Every faction picks three elites from a stable of race-exclusive choices, each with a handful of extremely powerful abilities attached to them. So powerful, in fact, that the stronger choices can decimate entire armies in moments.

The Imperial Knight comes to mind — her gatling barrage can cut down almost anything sent after it, save for other elites in its fighting weight.  In the four hours of time I spent in multiplayer, the only effective counter to these top-tier units was to send in my own super-heavy choices along with a blob of cannon fodder to slug it out. It’s chaotic and gorgeous to behold (especially if the rig it’s on can get the somewhat hardware-intensive game up to 60FPS) but it doesn’t make for an exciting match when this is the go-to tactic every single time.

The multiplayer matches, where up to 6 people can duke it out, all come in only one style — a MOBA-influenced three-objective push toward victory comprised of a shield generator, a powerful turret, and the opponent’s Nexus… er… HQ. In effect, this squashes all rush strategies and makes games drag out far longer than a traditional RTS’s would. While I always hated the early game rush, this once again limits the number of ways a game can play out, leading to a paint-by-numbers bouts.

When compared to the other games in its genre, Dawn of War III is oversimplified. The base-building from the first returns, but it’s shockingly barebones. There is a limited tech tree, but no branching path to climb that would force me to choose to spec toward one build or another. Removing equipment loadouts for hero characters is another baffling choice given how much focus Relic has placed on them here. For example, Cover (a staple in both previous iterations of Dawn of War and Relic’s other RTS series Company of Heroes) has been reduced to a shielded control point. Morale, suppression, and weapon facing have all been stripped away. By removing these tactically important elements, there is little difference between setting up a carefully planned out defensive position and just clicking auto-attack toward the enemy.

Dawn of War’s progression system is also an unwelcome addition. Each of the three races has their own list of unlockable doctrines that can be used to customize each army, and much like the elite units, players get to pick from three doctrines at the start of each match. These are small buffs meant to tweak each race to fit a specific playstyle, but the problem is that most of these doctrines are locked behind a currency earned at a snail’s pace, and has to be shared amongst all three factions. Essentially, if I wanted to unlock every doctrine for my chosen army, I would have to not only put dozens of hours into the game, but I would have to ignore spending anything on the other two factions. It’s frustratingly limiting, and there’s no reason for it to exist other than trying to cash in on the trends found in the “loot box” system found in other MOBAs.

Dawn of War III isn’t a bad game — it’s just not a good one either. By trying to chase what’s popular, Relic lost a lot of what made this series so great in the first place. With the promise of more factions to come, there could be more to this game a few months from now, but as it stands right now, it’s too basic to dance at the ball. Rating: 6 out of 10

Disclosures: This game is developed by Relic and published by Sega. It is currently available on PC. This copy of the game was obtained via Publisher and reviewed on the PC. Approximately 12 hours of play were devoted to the single-player mode, 4 hours to the multiplayer and the game was completed.

Parents: According to the ESRB, this game is rated M and contains blood and gore, violence, cockney Orks, and heresy. The 40K world is extremely dark and violent. Dismemberment, death, demonic sacrifice, and the extermination of entire worlds are all commonplace. This is absolutely not for children.

Deaf & Hard of Hearing Gamers: Story dialog is subtitled but there are several audial battle alerts that notify players to attack. Keeping a close eye on the minimap will help, but it is easy to get wrapped up in the carnage around you. Be aware that this is the only way the game will let you know if you are under attack unless you are looking right at it.