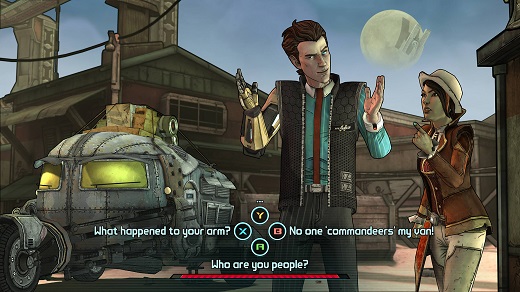 HIGH Perfectly nails the humor of a Borderlands game.

WTF Just how many games will feature Troy Baker this year?

Telltale has been doing a bang-up job the past few years. Both The Wolf Among Us and The Walking Dead are known for their fantastic writing and faithfulness to the source material they draw from. I'm pleased to say that Tales from the Borderlands: Episode One—Zer0 Sum continues that trend by combining some great laugh-out-loud moments with the kind of Pandora-style ultraviolence that's expected from Borderlands.

The premier episode of Tales from the Borderlands, Zer0 Sum, takes place an unspecified time after the events of Borderlands 2. The story alternates between two leads: Hyperion corporate ladder-climber Rhys and resident con-artist Fiona. The pair get involved with an under-the-table purchase of a mysterious Vault Key, but they each have their own motivations. Neither one is what I would consider a great role model, but then again, who on Pandora really is?

It should be noted that because the story is being told from two different viewpoints, events might not wholly match up based on who the current narrator is. Tales from the Borderlands uses this for comedic effect a few times over the course of the episode, but I hope this premise is kept as a constant for the whole series. After all, Fiona is an accomplished con-woman and Rhys couldn't have gotten up the Hyperion food chain without at least a few half-truths and deceptions. By the end of the season it will be interesting to see just how much of this story is real…

Each character controls identically with a few bells and whistles to make them feel slightly different. Rhys can inspect objects with his ECHO Eye, a cybernetic implant imbedded in his skull that allows him to glean information about what he's looking at. Fiona can use money found in-game along with her con-artist heritage to buy or bribe her way out of difficult situations. While Rhys's scanning ability highlighted a few funny tidbits in the world around him, Fiona's specialty felt underused and unnecessary. Sure, her mechanic encourages exploration to find hidden caches of cash, but beyond a seemingly arbitrary purchase toward the end, I saw very little reason to use it. Hopefully Telltale finds a way to put it to better use in later episodes.

While Telltale nailed the Borderlands feel, their work still has a glaring weakness—the controls. Tales plays better than most of their previous games, but it still has a fair number of issues when free movement is allowed. I don't feel like I'm driving a tank like I did in other Telltale games (and that's an improvement) but I still caught myself getting hung up on bits of background as I explored.

Interestingly, Telltale seems aware of this problem and have done their best to limit when it happens rather than fix it by giving the player very little direct control of Fiona and Rhys during Zer0 Sum's 2.5 hours. With the exception of a few isolated instances, the game played itself, and left me with little to do besides push buttons for quick-time events and select dialog choices. Such limited opportunities for player participation take away from the "gameplay" aspect of Tales from the Borderlands, and I'd rather see something broken get fixed than be frustrated with a lack of control.

However, none of the gameplay issues I had detract from how funny I found the writing to be. While the overused ‘Vault Key' MacGuffin might start wearing thin to Borderlands vets, the secondary characters overshadow any complaints. From a creepy museum curator to a bandit leader that's integrated himself into a stereo system, the backing cast always gave me something to chuckle at.

In fact, it's a testament to how well-crafted the Borderlands universe has become over the years that I can still be entertained by the franchise while having the gunplay stripped out of it. The story, writing and voice acting in Zer0 Sum are as strong as in any other Telltale effort, and the ludicrously absurd planet of Pandora is still a treat to experience. While none of the new characters have risen to the level of Tiny Tina or Handsome Jack yet, they're still intriguing enough to keep my interest.

If the rest of Tales of the Borderlands is as solid as Zer0 Sum, then Telltale will be able to count another great story under its belt. Rating: 8 out of 10.


Disclosures: This game was obtained via publisher and reviewed on the PC. Approximately 2.5 hours of play were devoted to the single-player mode, and the story was completed.

Parents: This game is rated M by the ESRB for intense violence, blood and gore, suggestive themes and strong language. While the game might look like a cartoon, there are several instances of foul language and over-the-top violence including a rather gory scene with a giant monster and a sword.

Deaf & Hard of Hearing: The entire game can be played with subtitles for dialog only. While there are no audio cues needed for gameplay, the subtitles will not cover ambient sounds or background noise.

Very much worth mentioning. Not something I originally noticed but I will attempt to keep that in mind in the future.