The Pinnacle of Pandoran Pandemonium 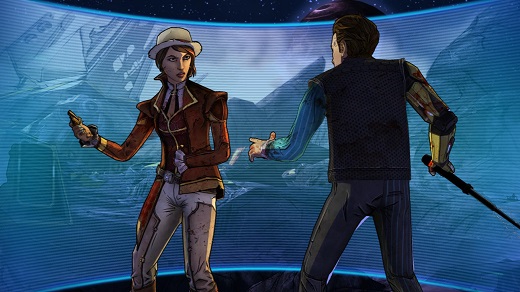 HIGH: It's by far the best thing Telltale has ever done.

LOW: When the humor misses, it misses big.

WTF: I saved my in-game cash through all five episodes for that?

Now that it's concluded, I feel comfortable in saying that as a series, Tales from the Borderlands is the best thing Telltale has ever done. Of course humor is at the forefront in true Borderlands form, but the writing manages to run the entire gamut of human emotions and pulls it off swimmingly. While there are rough spots (episode two!) they do little to derail the game as a whole. Telltale does an excellent job of making the player care about its deeply flawed characters while keeping the laughs front and center, and it's a formula that other developers attempting comedy should study.

The stars of the show, con-woman Fiona and corporate drone Rhys, are fantastic additions to the Borderlands universe. They allow newcomers to view the franchise with fresh eyes and eliminate the need for rushed exposition into an established character's backstory, while also saving fans of Gearbox's work from rehashing what they already know.

The supporting cast is equally memorable. Rhys's best friend and Fiona's sister play off their respective partners well, and Gortys is too adorable for words. Surprisingly, the best of them all is Loaderbot. How Telltale made me care about a piece of sentient construction equipment is beyond me. Of course, there are still plenty of callbacks to previous Borderlands with Scooter, Athena, and everyone's favorite megalomaniac Handsome Jack, besides cameos of several other familiar faces.

The fabled treasure-stuffed Vaults serving as the MacGuffin in the main Borderlands games perform the same function here. Tales begins in the aftermath of a deal for a fabled Vault Key that goes comically wrong. Rhys and Fiona, captured by an unknown third party and held at gunpoint, retell the events that happened prior. Watching one of them attempt to spin the past in their favor, only to have the other pull them back to reality are some of the best moments in the first half of the season. The bickering back and forth about what really happened dies down as the story progresses, but it does make one wonder exactly how reliable they are as narrators.

Regardless of its veracity, the story is packed with over-the-top violence, laugh-out-loud moments, betrayals, sacrifice, and Reddit memes. Telltale artfully interweaves all of these seemingly-conflicting things into a cohesive narrative that lands in my top stories of the year. However, because of how well everything meshes in general, it's extremely jarring the few times when it doesn't. For example, Tales sometimes dips too deeply into real-life messageboards for its jokes, and when it does, the results are painfully eye-rolling.

I can forgive those few flubs since the acting is top notch, and Laura Bailey, Troy Baker, and Dameon Clark should all be commended for their work. With the industry currently undergoing growing pains in the relationship between publishers and voice actors, Tales from the Borderlands is an example of why performance matters. Of special note is Clark's final lines as Handsome Jack. Without getting into spoilers, the emotion in his voice made me hesitate when the time came to do what needed to be done. That's saying a lot considering how awful of a human being Jack is.

Structurally, Telltale's patented illusion of ‘choice' is still peppered throughout Tales from the Borderlands, although it does have more meaning here than in previous works. The story will still end up exactly where it was preordained by the developers, but the paths taken are more varied and the climactic battle at the end shows how decisions matter—choices made all the way back in episode one affect the finale! It's refreshing to see long-term ramifications play out, even if it's still largely window dressing.

With each new Telltale game, my expectations get higher. As such, it's a bit disappointing to see the recurring problems with their games—dull puzzle elements, stiff controls, odd animation quirks—still need to be addressed. These developers have been in the spotlight long enough that we can no longer see these as missteps from an up-and-coming studio. Fortunately, the persistent issues don't pull much away from Tales, although it is tiresome to see the same issues popping up again and again.

Those issues aside, I never expected Tales from the Borderlands to be as good as it is. Honestly, I was worried that Telltale had over-committed when they announced Minecraft: Story Mode in addition to this and Game of Thrones. I assumed it was going to be too much for them to handle, but I was clearly wrong. Tales is far and away the most entertaining game I've played from Telltale yet…. And given the way the final episode ends, I'm very much looking forward to the sure-to-come second season. Rating: 9.5 out of 10


Disclosures: This game was obtained via publisher and reviewed on the PC. Approximately 10 hours of play were devoted to the story.

Deaf & Hard of Hearing: Everything spoken in the game is subtitled with each character having their own colored subtitles to help identify who is speaking and when.