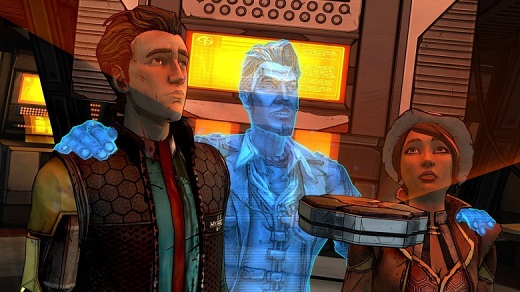 HIGH: Anything that involves Handsome Jack.

LOW: Why am I collecting everything when it's never used?

WTF: How is every song featured in a Borderlands game so damn good?

The newest episode of Telltale's Tales from the Borderlands continues the laughs of its first episode, Zer0 Sum, while greatly expanding the development of main characters Rhys and Fiona. The only problem is that the game doesn't seem to know what it wants to be. One moment it's a slapstick Looney Toon-esque jaunt through the Pandorian badlands, and the next it's a solemn contemplation on the events from the previous episode.

The Borderlands series, especially the second, has always swung the pendulum of hilarity and tragedy pretty quickly between the two. Atlas Mugged is no exception to that. The problem arises when the group gets split up early on. It ends up feeling like two completely different games, with Rhys getting most of the laughs and Fiona bogarting all the emotion. It's a credit to the writers that both stories in their own right are excellent, but it does make the middle chunk of the game feel disjointed from the rest.

Picking up where Zer0 Sum left off, Atlas Mugged starts with the cast assembled in an underground facility planning their next move. The game wastes no time getting into over-the-top humor with a disturbing retinal scan bit involving most of the group. Meanwhile, Rhys has to deal with the digital ghost of Handsome Jack, his idol and the former Top Jerk of the company he works for. The scenes between Rhys and Jack are the highlights of this episode, and are more than sufficient to cover the price of admission.

From here the group is split up. Rhys and his sidekick Vaughn are separated from Fiona and Sasha, and it's at this point when everything breaks down into the dichotomy mentioned earlier.

Rhys's story is just one madcap situation after another, with ostensibly serious moments feeling like they're from a Saturday morning cartoon. The pair never once felt in any tangible danger, even when threatened at gunpoint. If an anvil fell on someone's head, it wouldn't have seemed out of place.

Fiona's side is infinitely more sober, and the darker tone of her story totally clashes with the rest—it's hard to go from being chased by the equivalent of Elmer Fudd to then addressing the death of a key figure. Telltale's storytelling is strong enough to overcome most of the problems, but it's jarring nonetheless.

Fortunately, the dissonance between the two differing tones doesn't last long, as the gang is reunited rather quickly. Once everyone's back together, the humor and drama sync up once again and everything fires on all cylinders. However, if future installments keep pulling everyone apart, I hope they maintain a bit more balance than they did here.

While the stars of the series are Fiona and Rhys, I would be remiss if I didn't talk about the true standout star of Atlas Mugged—Handsome Jack. Jack is arguably one of the most memorable villains to come from gaming in recent years (although he'd insist on being called a hero) and he steals every moment of screen time he gets. Tales from the Borderlands would stand well enough on its own without him, but his addition makes it all the more enjoyable.

Also of note is that several of Rhys's conversation options involve praising Jack's digital imprint. It's almost as if the developers were aware of how many people loved the character and wanted to offer them a chance to tell him so by proxy. I wouldn't normally mention it, but there's just enough fourth-wall breaking here to convince me this was intentional.

As far as my other criticisms go, I could nitpick how useless gathering cash is, and how nothing I've collected seems to have any use so far, but those gripes are insignificant when compared to just how damn enjoyable it all is. Despite my issues with its tonal shifts, Altas Mugged is another solid episode with excellent acting, humorous dialog, and an ending that has me eagerly awaiting the next installment. Tales from the Borderlands is two for two so far. Rating: 8.5 out of 10.0


Disclosures: This game was obtained via publisher and reviewed on the PC. Approximately 90 minutes of play were devoted and the game was completed.

Parents: This game is rated M by the ESRB. This game contains violence, blood, language, use of alcohol, eyeball gouging, Rakk abuse, and digital possession. All the blood and gore is presented in a cartoonish manner, but I would keep an eye on it to see if it might be too much for kids.

Deaf & Hard of Hearing: Everything is subtitled from front to back. There should be no problems at all playing this.