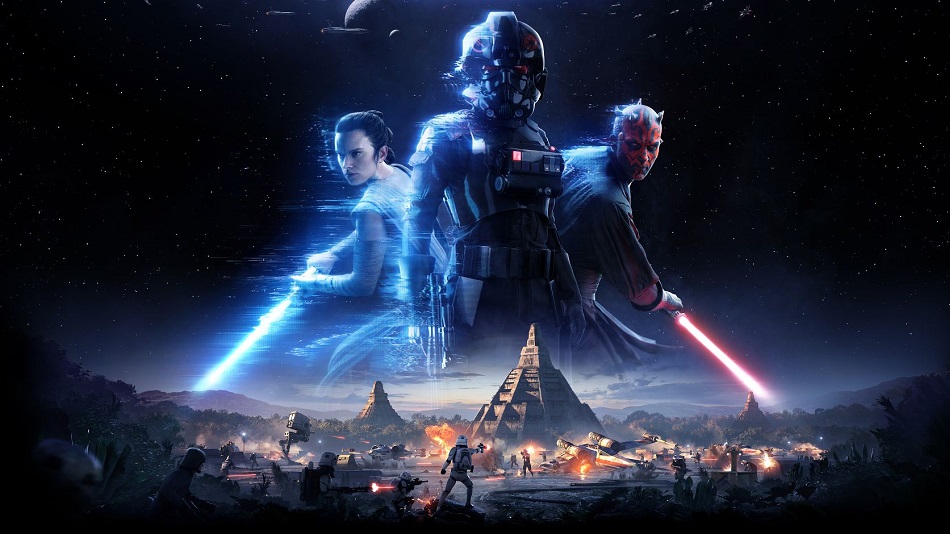 WTF Who thought Star Cards were a good idea?

Star Wars Battlefront II is exactly what happens when squeezing every last dollar from a customer is prioritized above making a solid game. What should have been a slam dunk following Battlefront‘s entertaining (but shallow) 2015 entry has turned into a gameplay and PR nightmare. The progression system on offer here is horrendous, grindy and random, and not even the inclusion of a disjointed single-player campaign is enough to justify paying full price for this.

What Battlefront II gets right, it nails perfectly. Its backdrops are gorgeous, the iconic sounds of blaster fire and TIE screeching overhead are impeccable, and the gunplay finally feels like it has some weight to it. Most importantly of all, it feels like Star Wars. Seeing the top of an AT-ST crest over the hovels of Mos Eisley or strafing helpless rebels from above over Hoth all invoke feelings of nostalgia and wonder from the movies. The problem is that great aesthetics aren’t enough to make a great game.

Multiplayer is where the meat of the package is, and this time there are five different modes.

The two decent offerings are the 24-player Starfighter Assault, and the 40-player Galactic Assault — the closest there is to Walker Assault found in 2015’s Battlefront. This mode offers massive battlegrounds with 20 people per side on the ground, and sometimes in the air. One team has a progressing series of objectives such as planting bombs, capturing points, or escorting a lumbering vehicle while the other side defends against them. 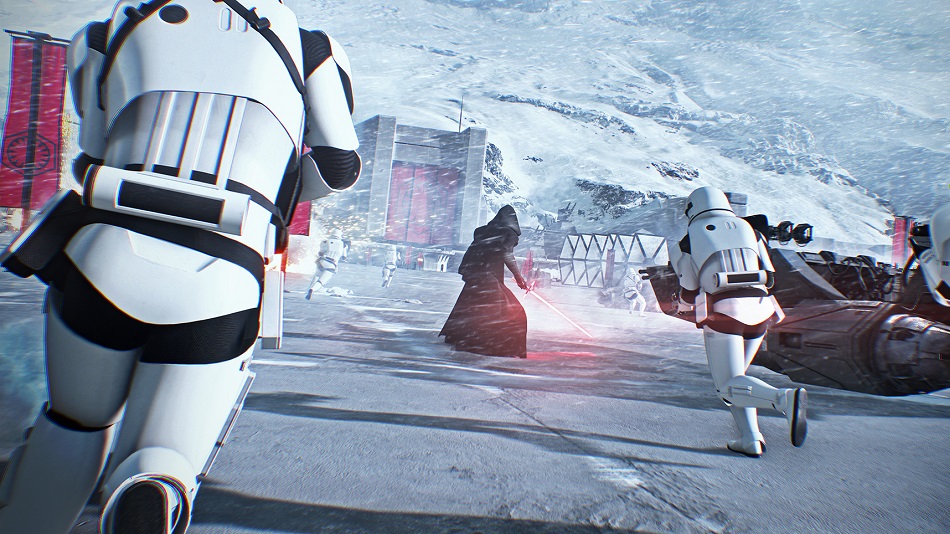 Sadly, despite being the best way to spend time in the game, there’s little tactical nuance to it — victory is often decided by whichever group of troopers has better aim. Doing well earns the player battlepoints that can be used to purchase special classes, vehicles, or even heroes that can quickly turn the tide. However, this system can quickly spiral out of control.

While there’s a limit to how many special classes can be on the map at once, there’s no limit to how many times the same player can pick a better class if they have enough points. For example, if I get enough points and upgrade into a low-level vehicle like a landspeeder, its extra power lets me rack up even more points at a faster rate, and then suddenly I have enough to be a top-shelf combatant like Darth Vader. Cutting down swaths of rebels with his iconic red saber will then rack up even more points. With enough pooled, I could instantly hop back into Vader again the moment I was defeated, keeping anyone else from getting him and continuing the beatdown.

A cooldown on heroes and special classes would go a long way here, but with the current system it’s just the same dominant players in the same top-tier heroes, and if they have powered up Star Cards, there’s almost no stopping them with anything short of massed, coordinated firepower.

So, about those Star Cards. These are the rewards in Battlefront II‘s excuse for a progression system, and they destroy any sense of balance in the game. Simply playing gives a trickle of credits that can be used to buy loot crates that contain a random assortment of cards or crafting parts to make these cards better, along with more mundane rewards such as emotes. These randomly-gained perks can dramatically improve damage output, resistances, cooldowns, weapon handling, accuracy, or swap out abilities for each class.

I need to stress that what comes in these crates is completely random, meaning that it’s entirely possible to open dozens of crates and get Star Cards for classes and heroes that a player will never touch. In fact, after 25 hours of playing I only unlocked one Star Card for my preferred class, and it was a skill that wasn’t even beneficial to my playstyle! By tying progression to lootboxes, the obvious push is to get players to spend real-world cash on a virtual slot machine in hopes of getting what’s desired — and make no mistake, fully-leveled Star Cards are required to hit the top of the leaderboards. 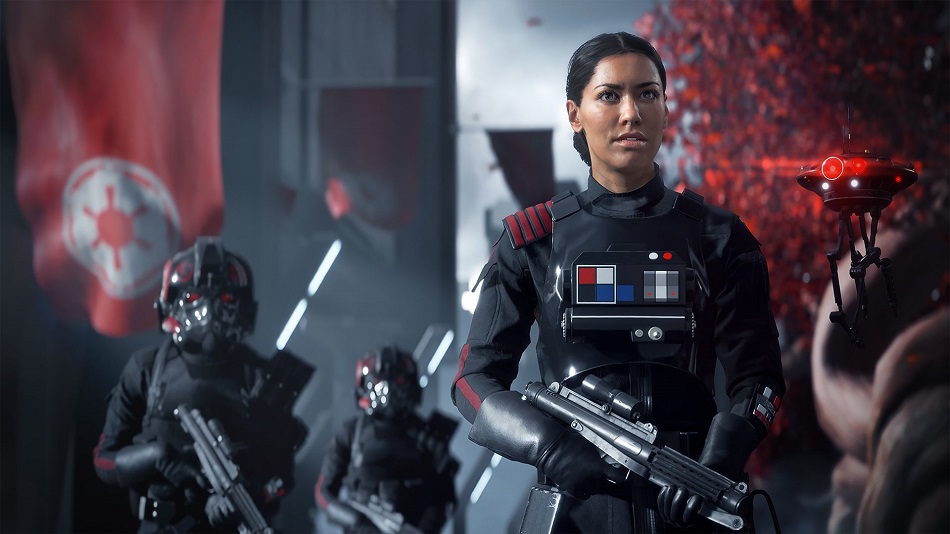 At the time this review was written, in-game purchases had been temporarily turned off due to a massive public backlash against EA. However, the system is still in place, meaning that getting the perks I want for my preferred classes is an infuriating grind of getting enough credits for one more randomized lootbox in hopes of coming out a winner.

Even my favorite mode, Starfighter Assault, is plagued by this pay-to-win system. Dogfights between X-wings and TIE fighters are tense affairs, especially in some of the more complex maps like the ruins of the second Death Star. However, skill doesn’t matter so much if my opponent has Star Cards that gives them stronger lasers, reduced cooldowns, and more health.

Consequently, there was more than one instance where my standard TIE fighter would open fire on a Millennium Falcon powered by fully-leveled Star Cards and I’d barely even scratch the paint. Worse, what little damage I’d manage to do didn’t even matter because the ship had Star Cards that reduced the cooldown on its healing ability. With this cash-fueled imbalance in play, the enemy pilot was able to ignore me while they flew in a straight line while firing at the objective, and there was literally nothing that could be done about it.

Any prospective players reading this review and thinking that they don’t care about multiplayer and just want to jump into the campaign shouldn’t bother. Clocking in at just under five hours, the plot is disjointed, confusing, and rushed. Especially frustrating is that main character Iden Versio is great, but half of the story is spent in the roles of other heroes that dilute her impact. Additionally, the marketing push of “Fight for the Empire” is blatantly misleading. Versio flips her loyalties in the first third of the campaign, throwing the promise of seeing a Star Wars conflict from the other side right out the window. Battlefront II really missed a chance to explore with the concept of loyalty in the face of evil, and could have created a story with many layers of grey. Instead, what we get is a routine franchise plot that feels like it was designed by committee.

The worst thing about Star Wars Battlefront II is that it could have been great. Without the terrible leveling system designed to milk money from players, the multiplayer would be a blast. If the story was expanded and focused on Versio, it could have been worth discussing. Instead, the final product is so cynical and wrongheaded that it’s added fuel to a larger discussion about lootboxes and gambling that’s starting to grab the attention of lawmakers outside the industry. Rating: 4.5 out of 10

Disclosures: The author of this review has worked with Battlefront II’s campaign story co-writer Mitch Dyer in 2015. This game is developed by EA DICE and published by Electronic Arts. It is currently available on PC, PS4, and XBO. This copy of the game was obtained via publisher and reviewed on the PS4. Approximately 4 hours of play were devoted to the single-player mode, and the game was completed. 20 hours of play were spent in multiplayer modes.

Parents: According to the ESRB, this game is rated T and contains Mild Language, a Snarky Duros, and Violence. There is nothing that would be seen outside of any other Star Wars movie here. There could be concern about the idea of playing on the Imperial side for a few missions, but it’s morally clear who the bad guys are here.

Deaf & Hard of Hearing Gamers: The game offers subtitles and there were no elements in the game that require sound to complete.

Remappable Controls: On the PS4, the game offers a small selection of preset configurations, but they are not customizable beyond that.

Colorblind Modes: There are three colorblind modes for Deuteranopia, Protanopia, and Tritanopia.