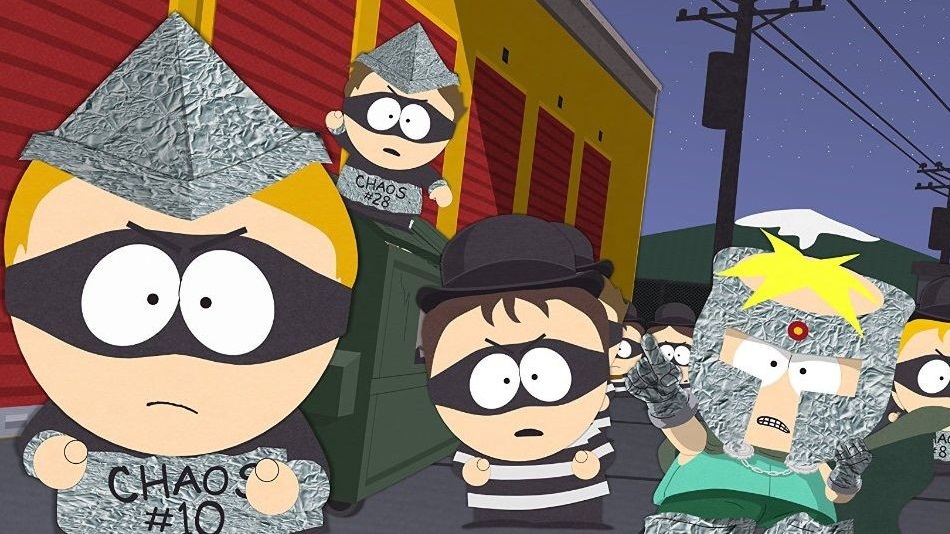 HIGH Lots of laughter to be had here.

LOW A ton of recycled content from the show.

WTF The entire game. All of it.

Until three years ago, South Park games were mediocre at best. The Stick of Truth changed all that by giving us both a decent RPG and a hilarious game in one package. South Park: The Fractured But Whole expands on what Stick started by improving the turn-based combat, but a heavy reliance on recycled segments from the show limits the laughs.

For the uninitiated, South Park holds nothing back when it comes to mocking. Both conservative and liberal talking points get lashed throughout the adventure, and anyone with delicate sensitivities will likely offended. In fact, there’s sure to be something here that will make even the most thick-skinned players feel like the writers have crossed the line… and that’s the point

Along similar lines, the preview coverage was also somewhat contentious with the reveal of Whole‘s “difficulty” slider. This slider appears during character creation and the higher it’s set, the darker the player’s skin becomes. In the end, this has little-to-no effect on the gameplay (the combat difficulty is completely separate) but those looking for all the achievements should take note that one of them is unlocked by playing on the “hardest” mode.

Those issues aside, The Fractured But Whole picks up where The Stick of Truth wraps up with New Kid (the player) and the rest of the cast instantly switching their personas with the speed of a child’s attention span. Gone is the fantasy-themed, Dungeons & Dragons motif of the first game, now replaced with super-heroes, arch-villains, and movie franchise deals.  Cartman’s scheming, Batman-inspired character The Coon rallies the South Park kids around the premise of tracking down a missing cat to earn the reward money. Of course, like the previous game, this seemingly benign plot leads into larger events at play.

When it comes to capturing the essence of the TV show, The Fractured But Whole nails it perfectly. In fact, it could be easily be mistaken as an overly-long episode from the series with how spot-on everything looks. The voice acting, the animations, call-backs to previous episodes and The Stick of Truth permeate the game. 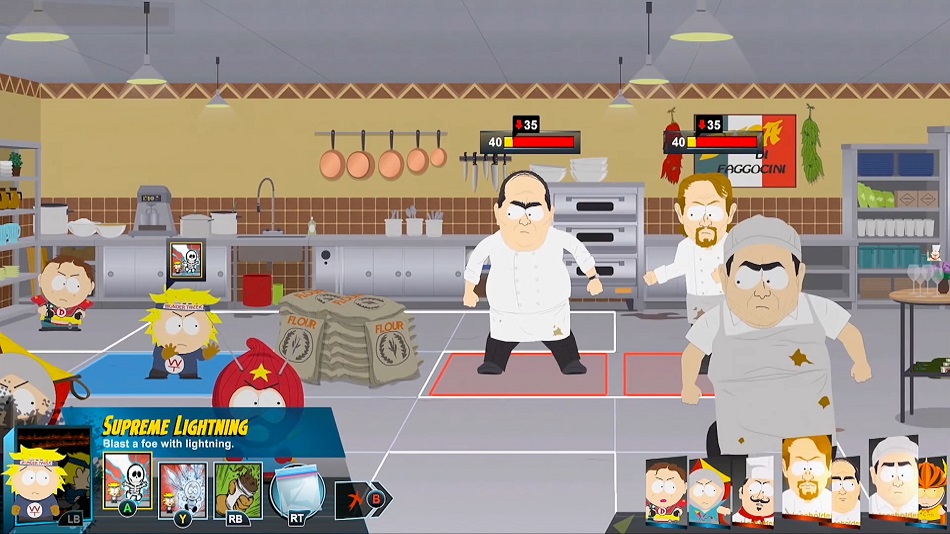 Unfortunately, Whole borrows too liberally from its source material thanks to several of the jokes and gags being recycled from the past. Dr. Mephesto’s obsession with multi-assed critters, PC Principal’s overly aggressive stance against micro-aggressions, and even the mastermind behind all of South Park‘s current problems are essentially cut-and-pasted from their respective episodes and dropped into the plot. It’s funny, but it’s also well-worn material that only elicits mild chuckles now instead of the robust laughter it used to.

Since much of the material is re-used, the most prominent change between Whole and Stick is how combat is handled. This new, expanded system is still turn-based, but now takes place on a grid. Positioning is key as every one of the dozen-plus superheroes on the roster have varying abilities that affect different areas on the field. The Coon, Super-Craig, and Mysterion tend to favor stronger attacks focusing on one or two grid squares at close range, while Toolshed and The Human Kite are better suited for the back lines thanks to their area-of-effect skills.

The New Kid can pick and choose their skills from a list of classes that expands during the course of play. They can either be a jack-of-all-trades with a mix of up-close and distance attacks, or they can specialize in one particular style. Either way, it’s important to build the four-person team around the New Kid, making sure to fill in whatever gaps exist in the lineup.

While more complex than before, the action in Whole isn’t what I would call difficult. I was able to blow through a large chunk of the campaign without a second thought, save for a few boss fights where the mechanics changed up. After a while, though, I was avoiding combat whenever I could. Frankly, its novelty wears off toward the last quarter of the campaign and there isn’t enough variety to justify fighting every group of enemies the gang comes across.

Even the puzzles, if they can be called that, are relatively simplistic in nature. Almost all are focused either around moving an item to climb on it, or having skills acquired from other heroes to advance. Almost every time something seemed impossible, more often than not it was a story-enforced roadblock. For example, if there’s a chest behind a barrier that New Kid can’t get to, there’s no clever way around it — the party simply lacks a character who can toss the barrier aside.

While South Park: The Fractured But Whole builds upon the mechanical groundwork laid by The Stick of Truth, it doesn’t have the same impact its predecessor had. Nothing is as shocking as Stick‘s sights, too much of the same ground is covered again, and while the combat is improved, it’s nothing to write home about. South Park: The Fractured But Whole is still entertaining and I enjoyed my time with it, but I couldn’t help but feel like I was watching a rerun. Rating: 7.5 out of 10

Disclosures: This game is developed by Ubisoft San Francisco and published by Ubisoft. It is currently available on PS4, XBO, and PC. This copy of the game was obtained via publisher and reviewed on the PS4. Approximately 22 hours of play were devoted to the single-player mode, and the game was completed. There are no multiplayer modes.

Parents: According to the ESRB, this game is rated M and contains Blood and Gore, Mature Humor, Nudity, Memberberries, Sexual content, Mutant 6th Graders, Strong Language, Use of Drugs, Canada, and Violence. Make no mistake, this game earns the M rating. Over-the-top violence, extremely sexual humor, strong language nonstop and all without the limits normally found in the TV show.

Deaf & Hard of Hearing Gamers: All the cutscenes are subtitled, but chatter during battles is not. While this won’t affect gameplay, there are some ambient/situational jokes and quips that will be missed.

I consider this game comfort food for fans of the show who just want more show. I don’t feel challenged or addicted to play endlessly, it’s just very pleasant whenever I come back to it.