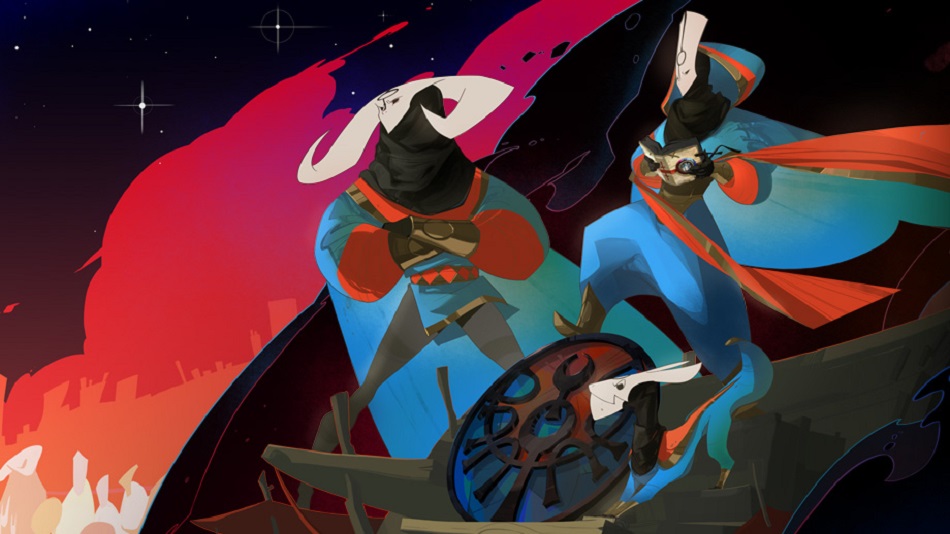 I’m quite torn about Pyre. On one hand, Supergiant’s follow-up to Transistor is easily the most intriguing setting they’ve conceived. This tale of exiles banished to a purgatory had me fully invested from the onset. On the other hand, the gameplay is just downright boring. The strange keep-away/basketball hybrid at its core never struck me as entertaining — instead, I found myself reluctantly returning to this new work, suffering through the mechanics just to get back to the excellent narrative.

Pyre is set in a wasteland known as the Downside, where the Commonwealth expels undesirables for even minor infractions. To escape, groups of exiles form teams to compete in a 3-on-3 tournament known as The Rites. The final two teams then face one another in the Liberation Rite where the victor gets to choose a compatriot to release back into the Commonwealth, their sins absolved.

The goal of The Rites is simple. Grab a glowing orb in the center of an arena and dive into the opposing team’s pyre with it. Each successful goal snuffs progressively more of the flame, and once the fire has been extinguished, the player wins. To keep the other team from getting the ball close to the player’s pyre, each character has an aura that can be fired across the arena to banish players for a limited amount of time, but it leaves them momentarily without defense.

The members of The Nightwings, my own team of outcasts, varied wildly in how they operated in the field. Take Jodariel for instance — she’s a massive horned figured with a giant aura excellent for defense, but she’s slow as molasses. Pamitha, on the other hand, can take the to skies and fly over the competition. Every one of The Nightwings is unique, with different sizes of auras, speeds, respawn times, and abilities. This variety makes it a shame that I was able to use the same strategy over and over again toward victory. 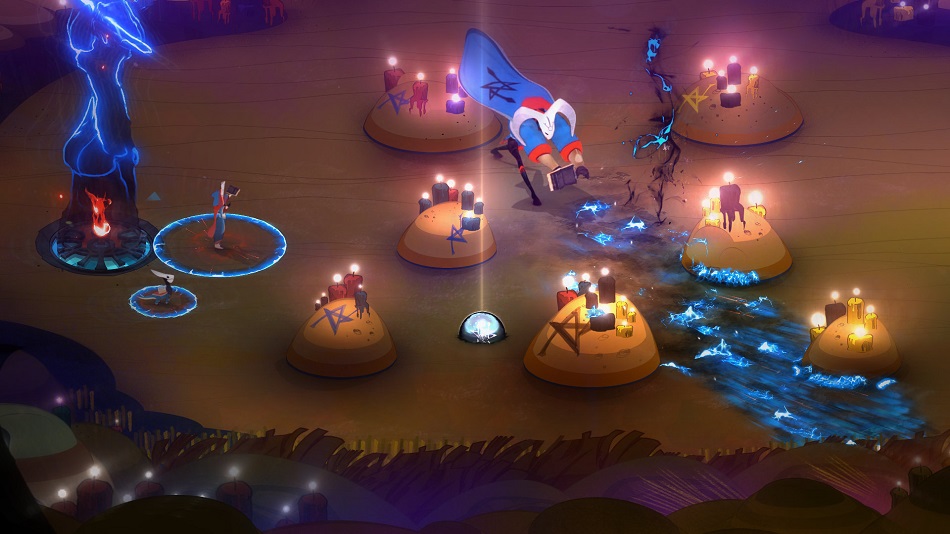 The AI in Pyre is extremely predictable. So much so that every match was winnable by simply taking the fastest teammates I had and using them to toss the ball back and forth until scoring. While taking the ball into the enemy’s pyre removes the scoring player for the next round, this hiccup was only ever a minor setback to the strategy.

Participating in The Rites gives experience that can be used to level up a character’s stats and unlock a few passive skills from a limited tree. This, in addition to equipable trinkets, offers a tiny bit of customization, but it’s not enough to justify a bullet-point on the back of the virtual box.

In stark contrast to the bland Rites, everything else in Pyre is vibrant and exciting. I kept putting up with dunking the ball just to take more of the universe in. The art for each background is lovingly crafted, the collective races of Downside all stand out from each other, and the dialogue kept me invested in learning as much as I could about the world. Prying out the details of each exile’s life, why there were there here, and discovering their motivations were what made this otherwise-plodding experience tolerable.

Unfortunately, the story continues no matter who wins The Rites. The player can lose every single match, and the plot still keeps chugging away. Of course the end changes slightly and every exile’s epilogue is different, but Pyre could have easily been a visual novel, and I would have honestly preferred that instead of being forced to suffer through the tedious magic-balling. The lack of any real consequence to losing makes The Rites not only dull, but meaningless as well.

When Pyre shines, it shines immensely. I haven’t been this invested in the lore of a game for a long time, and was left craving more. What’s the process that connects the Downside to the Commonwealth? What history do the two mysterious minerals share? How on earth is communication between these two worlds possible? I have countless questions about Pyre‘s setting. However, considering where the game’s strengths lie, the structure they chose to couch it in feels uncharacteristically off-target. Pyre could have been a great text game, or even a fantastic TV series or Netflix show, but as a sports game? It’s a misfire. Rating: 6.5 out of 10

Disclosures: This game is developed and published by Supergiant Games. It is currently available on PC and PS4. This copy of the game was obtained via publisher and reviewed on the PC. Approximately 12 hours of play were devoted to the single-player mode, and the game was completed. There is multiplayer, but no time was devoted to it for this review.

Parents: According to the ESRB, this game is rated E10+ and contains fantasy violence, tobacco reference, mild language, use of alcohol, fireproof clothes, exploding imps, and an upside down waterfall. The game’s tone is serious and deals with revolution, betrayal, and the topic of suicide comes up toward the end. Nothing extreme, but for those sensitive to these issues, be aware.

Deaf & Hard of Hearing Gamers: There should be no issues for anyone when it comes to playing the game. Everything is subtitled or written out and most of the spoken “dialogue” is a form of Sim-like gibberish.

Remappable Controls: The game is fully remappable on a PC with mouse and keyboard.