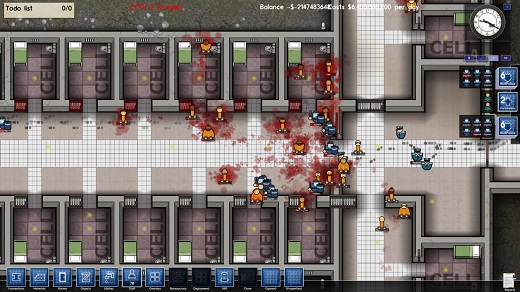 WTF Where the hell are my prisoners hiding all this contraband?

I burnt my first prison down to the ground. There were no survivors.

It's not like I planned for this to occur, but when the seventh riot of the day happened, I'd had enough. A few prisoners got into it, a fire started, and things quickly spiraled out of control. I was already dissatisfied with the layout and was looking for an excuse to start over, and the fire was the perfect opportunity for me to begin again. I locked everything down, posted armed guards at the only exit, and waited for things to cool off. Literally.

126 bodies later, I built a new prison on the ashes of the old one.

This may sound horrifying for those who see Prison Architect as a biting commentary on the incarceration industry, and a case for that could be made. However, I played this ‘simulation' for what I saw it as—an entertaining sandbox in the same vein as SimCity and Rollercoaster Tycoon.

True to its name, Prison Architect allowed me to create whatever type of building I needed in any way I wanted… once I was able to get past the lack of a proper tutorial.

Fair warning: anyone looking to run their own correctional facility should be prepared for a learning curve. The five-mission campaign doesn't really get into the nitty-gritty details of how to successfully run a prison. It does a good job at teaching things such as riot management and disaster control, but the introductions to other systems leave much to be desired. Lots of trial and error is required to get the ball rolling, and far too little of the formula's complexity is clearly explained.

For example, the level of control that can be exerted in Prison Architect is far more expansive than I expected. The inmates' lives can be planned and regimented. Guards can be assigned to any location, or sent on custom patrol routes. Low security cell-blocks can be built for less serious offenders, complete with a TV in each cell. An oppressive super-max wing can cram in the more dangerous types, surrounding them with CCTV cameras and armed guards. Constructing plenty of solitary confinement rooms for those who step out of line is easily done as well.

The trick here is finding that perfect balance between a slap-on-the-wrist "Club Fed" and something as nihilistically harsh as Escape From New York. Setting up lax rules and putting too much trust in the prisoners leads to an influx of smuggled contraband and shower shankings. Conversely, too many mandatory lockdowns and a lack of entertainment leads to widespread riots that can only be solved with the cracking of skulls.

While it might sound cynical, efficiency is what I always strive for in games of this type. I had no interest in setting up classrooms or AA programs; I was in it for the dollar. By the time I was finished, my last prison was a well-oiled machine Big Brother would have been proud of, and a bureaucratic monolith of efficient executions and structured order that would make Terry Gilliam blush.

In terms of longevity, Prison Architect can last as long the player's attention holds out. State grants offer up cash incentives for expansions such as adding a chapel or taking in a certain number of inmates—essentially, they're a series of minor objectives that can extend play. While these grants keep things fresh for a time, a jail can only be expanded so much before it becomes repetitive.

Prison Architect also offers up an ‘escape mode' which allows play from the point of view of a prisoner. It sounds intriguing, but I found it to be dull and tacked-on. It feels like a quick toss-in, and not something the developers at Introversion genuinely wanted to include in the first place. It does support Steam Workshop though, so in time it might become more interesting than it is at present.

As I end this review, I'm reminded of a phrase attributed to Oscar Wilde: "The bureaucracy is expanding to meet the needs of the expanding bureaucracy." That sentence perfectly describes Prison Architect—as it is with many sims like it, it's growth for the sake of growth, and when I was done with the game and had my prison and had every little detail perfectly in place, I let it burn to the ground again. Rating: 8.0 out of 10


Disclosures: This game was obtained via publisher and reviewed on the PC. Approximately 14 hours of play were devoted to the sandbox, campaign, and escape modes.

Parents: The ESRB has not rated this title at the time of release. It contains blood, violence, sexual themes, drug and alcohol use, and strong language. While it might not look like it from the style, given the content addressed in the game, I would give this game an M rating.

Deaf & Hard of Hearing: Nothing is spoken in the game, all the dialog is text only. Everything that is needed to progress is contextually presented on the screen.

I have to stress one thing you hinted at in your review: the campaign is really, really short. I had seen the first “tutorial” mission from a let’s player and was absolutely pumped to play more. A couple of hours after said mission i was done with the campaign. Most of the drama regarding the gangsters was left unresolved, the government conspiracy was completely forgotten, and in general the ending felt completely rushed. As for the escape mode you mentioned, i didn’t feel much drive to play it beyond a couple of minutes. I had already played “The Escapists” so… Read more »

Glad to see this review hit GC. Nice job! It sounds as if you’d play the game very similarly to myself so I appreciate your honest approach to playing the game. I’ve been watching this game since it first hit Early Access, but I purposely didn’t read any user reviews on Steam. Anyway, what was I going to say again? I don’t know. I guess it was just, thanks.