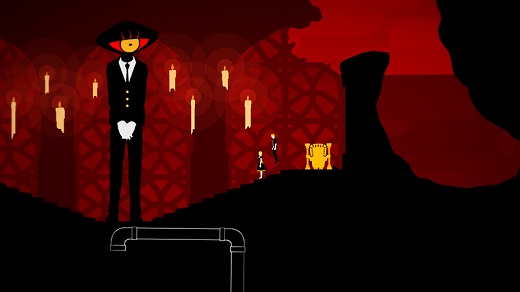 The first thing I thought of when I saw Tulpa was that it's Limbo as imagined by Tim Burton. It's an easy comparison to make thanks to side-scrolling, puzzle-based play crossed with surreal imagery — it conjured Coraline in my head more than a few times.

Tulpa centers around the ominously-named Ophelia, a young woman haunted by something horrible she's done in her past. It also features her spirit companion Oliver. Oliver is Ophelia's tulpa, a phantasm created from her own mind to help her cope with whatever nightmare she's running away from. As such, Oliver is completely bound to her and unable to exist past a certain distance. Likewise, Ophelia is can't handle the stress of being without her ghostly companion and will succumb to her fractured psyche if Oliver moves too far away.

This co-dependent relationship is what drives the puzzle solving in Tulpa. Oliver's non-corporeal form allows him to reach heights and interact with spiritual objects that Ophelia can't. Ophelia, on the other hand, can manipulate objects in the real world that the ethereal Oliver can't. They must work together to progress through the dark-fantasy landscape as Ophelia tries to piece together her past.

The puzzles I saw in my limited time with the game looked simple, but that's to be expected considering I only saw the first few minutes. What was shown looked to be limited to basic push/pull mechanics (which are fine) but I'm hoping the developers will get a bit more creative as the game progresses.

Insanity also plays a role in Tulpa's narrative. Whatever happened in Ophelia's past is causing her to hang on to her sanity by a thread, so sticking around a dead body for too long or wasting too much time in an unnerving room will quickly bring an end to her.

Also, the world itself will start to change as she makes her way through it. What I saw seemed normal at first, but things changed quickly — Houses in the background started to twist and move on their own, and later a mining excavator turned into colossal praying mantis. Before too long, Tulpa went from a simple Victorian-era landscape to a Buddhist-inspired nightmare before my eyes.

Interestingly, it was that same Buddhist imagery that caught my eye in the first place. With several developers trying to capture the magic Braid and Limbo had, there's hardly a drought of two-dimensional puzzle games like this. In such a crowded landscape, aspiring creators need something to stand out from everyone else and Tulpa does just that with its Tibetan flair.

In the end, while the gameplay doesn't do anything groundbreaking, the tone and setting of Tulpa is more than enough for me to keep an eye on it, and it's currently making its way through Steam Greenlight for anyone who wants to take a closer look.

Well, the freaky screenshot piqued my interest, and hearing that it’s reminisicent of Coraline just intrigued me even more. I will be keeping an eye on this game.