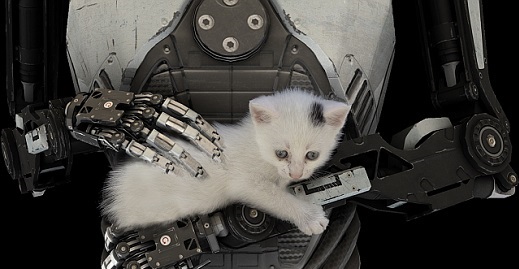 Is it simply being alive? Because if it is, than nearly anything could be considered a human.

Is it awareness? If that's the case, then are people in a permanent vegetative state not considered human anymore?

If I implant emotions into a self-aware machine, have I created new life? A new man? Further, does that make me God in the machine's eyes?

The Talos Principle doesn't pull its punches when asking such questions. In fact, the mystery behind what the player might actually be is part of the driving narrative behind the game.

The player wakes up in the middle of what appears to be an ancient roman garden as the booming voice of Elohim (Hebrew for ‘God') beckons you to complete his tasks, with eternal life as the reward.

However, is Elohim telling the whole truth? 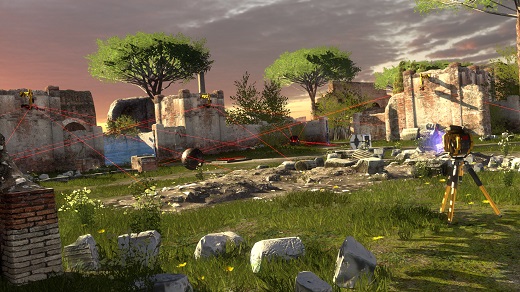 Exploring Elohim's worlds as I tried to discover who, or what, I might really be is the frosting, but The Talos Princple's puzzles are the cake. Advancement requires a certain number of sigils within each level. Those sigils are locked away by gates, or protected by turrets and floating, explosive balls-of-death. The trick is finding how to use the devices you are given to get past them.

Electronic jammers can be placed to turn off those pesky guns, letting me pass in relative safety. Prisms are use to bend red and blue lasers around corners, letting them hit their marks to unlock doors or turn on fans that launch me across the map. The trusty cube, bulwark of most puzzle games, can be used to block patrols or get to that just-out-of-reach ledge.

There are a few other devices The Talos Principle throws in there, but discovery is part of the game's charm, and curiosity is definitely rewarded. Computer terminals, both hidden and in plain sight, help fill in the backstory of the world. Of course, that is assuming one can trust what is being shared. What I've seen so far makes me feel I should question everything I see and do, which is fitting given how much philosophical talk about the nature of consciousness gets tossed around.

This is all very intriguing, but if I have one concern about The Talos Principle, it's that the plot might be setting itself up for a big fall. When dealing with such deep metaphysical questions, it's easy to come off as pretentious if it's not handled correctly.  If the finale isn't something truly memorable, then the entire game could suffer for it. Fortunately, what I've seen so far does a lot to ease that worry, but I'll have to wait until the game releases to be sure.

The Talos Principle launches for PC, Mac, and Linux on December 11 with PS4 and Android getting it sometime early next year.