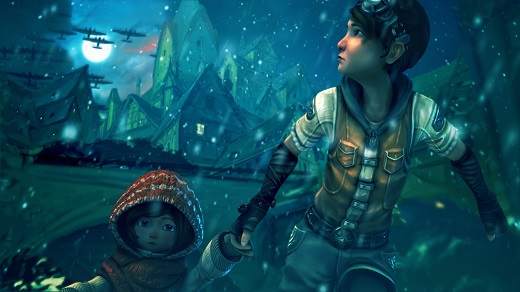 The upcoming point-and-click adventure game Silence: The Whispered World 2 starts off innocently enough. The intro begins with one of the two protagonists, Renie, playing in the snow with her friends just outside their small village. Silence takes this time to teach the basic controls as the youths build a snowman together. They roll a few balls in the snow, find a few bits of coal for the face, and debate on who gets to build the head.

The calm is quickly shattered by an unexpected air-raid siren screaming in the distance.

Here, the game cuts to the other main character, Noah. Those who played The Whispered World will recognize him as the young boy whose coma-induced dreamworld was the setting. Noah is also Renie's older brother and, understandably, is eager to get his sister to safety. Noah quickly drags her back to a heavily reinforced shelter before the mysterious planes start to bomb.

The details on exactly how the siblings end up in a world that was created by Noah's subconscious are fuzzy, but that mystery will be solved in the full game. In the preview, I saw that Noah and Renie play differently from each other. 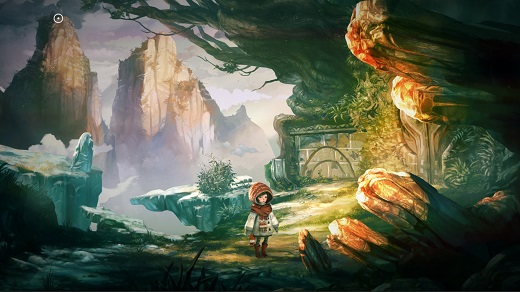 Noah, being older and more adventurous, seems willing get his hands dirty with the game's puzzles, and far less cautious about putting himself at risk.

Renie relies on an adorable little caterpillar-like critter called Spot to help her get by. Spot (another returning face from The Whispered World) can change his shape in a multitude of ways to help Renie advance. For example, he can be flattened out like a living, green pancake and slipped under doors and gates to unlock them from the other side. He (it?) can also suck up water, giving himself a shape close to that of a beach ball, and then shooting it on a fire to extinguish it.

While my time with the game's preview slice was brief, I had the feeling that Silence's bright and colorful fantasy world is going to be far darker than it first seems. The intro invoked images in my mind of the firebombing of Dresden from World War II, so I have a hard time believing everything is going to end up roses for the children…

As long as Silence can avoid the common pitfalls and nonsensical puzzles that often strike this sort of project, it could be something worth taking a look at when it releases for PC, Mac, and the Xbox One early 2015.