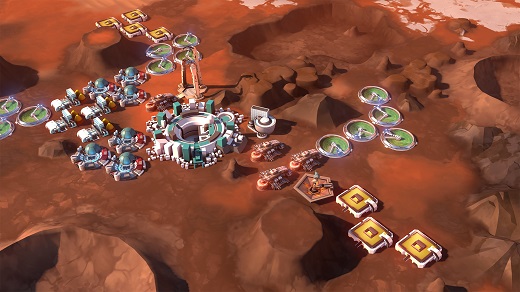 Offworld Trading Company is unlike most other real-time strategy titles I've played because in this game, wars are waged in boardrooms instead of battlefields and bonds are more valuable than bullets. Don't make the mistake of thinking OTC is a slow-paced spreadsheet simulator, however. Offworld Trading Company moves at a surprisingly brisk pace and those who fail to keep up will quickly suffer a hostile takeover.

The idea is simple: Mankind has finally been able to colonize Mars and a new land rush entices corporations from all over Earth to lay claim to as much of the Red Planet they can. Rush is the optimal word here as the company that builds on the land first, gets to own it. Accordingly, each player gets a set number of "claims" to use in the opening moments as they rapidly try to stake out the parcels with the highest yields.

Speed is key for there are not enough claims to get an aspiring CEO everything they might want. As such, players have to pick and choose what to focus on first, everyone else is doing the same. Take too long to make the decisions, and all of the high-producing hexes will be gobbled up by the competition.

Once a fledgling company gets off the ground, they need to expand as fast as they can to earn more claims, and to also keep their stock price high. Victory is achieved by buying out another company, accomplished by purchasing their stock. Execute poorly and the player's own stock will drop, making it easy prey for the surrounding sharks.

After a couple dozen games of Offworld Trading Company I can say that it has a learning curve like a brick wall. I'm still not sure what the best strategy is, and the speed at which things happen allows little room for beginners. While it seems simple enough mechanically, I have yet to find a solid starting strategy that works without massive struggle. Keep in mind OTC has just been released to Early Access on Steam, so I expect a myriad of balance fixes to take place before the final roll-out.

I can't help but think of M.U.L.E. when I play OTC. All the pieces are there and there is clearly a bit of inspiration taken from it. Watching the market for the right time to sell steel, having to chose which tiles to expand into, and trying to predict what the opposition will be planning all felt right to me as someone who's played that classic.

While the pacing still needs to be fine-tuned and a more thorough tutorial needs to be put in place, Offworld Trading Company has the potential to be an enjoyable and frantic economic strategy game. With any luck, these problems will be addressed when OTC leaves Early Access in 2016.