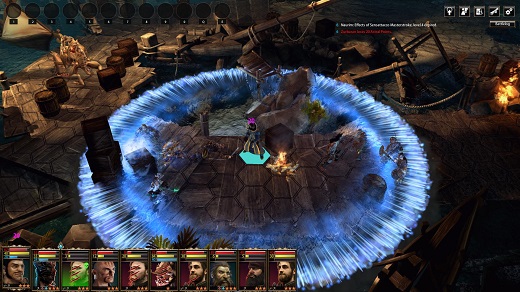 Daedalic Entertainment's turn-based strategy Blackguards released earlier this year to middling reviews. We reviewed the game ourselves and didn't find much to like about it, criticizing many of the features and stating that a myriad of problems push the game into the realm of mediocrity. Blackguards 2 is aiming to improve those problems while keeping the core of the gameplay untouched.

Blackguards 2 revolves around the same cast of anti-heroes from the first entry, starting with where their lives have gone since then. These are NOT the stereotypical knights in shining armor often found in fantasy settings – they're horribly flawed and downright unlikable for the most part, which is fitting for the harsh world they inhabit. It's this dark, "low-fantasy" (more Conan the Barbarian than Lord of the Rings) setting of the pen-and-paper RPG The Dark Eye that happens to be the biggest draw for me. These people aren't trying to save the world, they're just trying to survive it.

The mission I saw involved a staged break-in gone terribly wrong. The party tried to convince one of their past members to join them by saying they were in danger, and to help prove that point they hire a few local thugs to pretend to break into his residence and rob him. Of course, being local thugs, they agreed to the charade but quickly decide to ACTUALLY rob the mark while killing their employers for good measure. What results is the group having to run from one end of the level to the other with a superior force trying to overtake them. 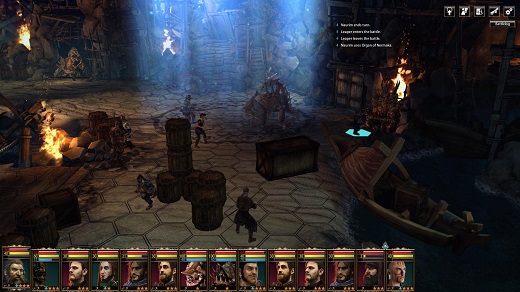 The area that was shown had several ways to interact with either the party, or the enemies scattered across it. Oil slicks can slow, or, if lit on fire, damage those trying to cross. Precariously-stacked boxes can make a great impromptu barricade forcing pursuers to either waste time moving them or find another route. One thing to keep in mind, however, is that these traps work both ways and the enemies will be all too happy to use them as well.

Mechanically speaking, I didn't see anything that would make Blackguards 2 stand out from other listings in the strategy genre. All the basic stats found in similar games are here, although the names are changed to line up with The Dark Eye system. Like most SRPGs, the attributes all boil down to the basics of how fast one moves, how hard they can hit, how well they dodge, and how much damage they can take.

Blackguards 2 has a long way to go to overcome the problems of the first game, and what I saw doesn't do much to relieve my concerns. Admittedly, the game is still a few months from being released, but framerate issues and technical problems detracted from what otherwise looked to be an entertaining strategy RPG. If Daedalic can lock down those problems before the game's January 2015 release window, then Blackguards 2 might be worth a look.