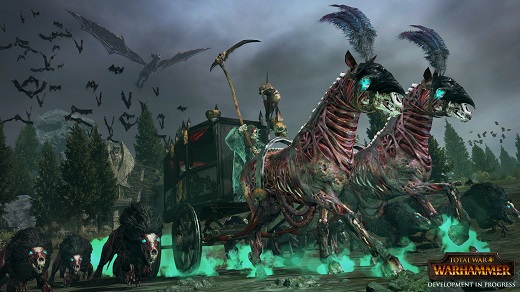 Until now, the factions found in Creative Assembly's upcoming Total War: Warhammer have been sticking close to the franchise's formula. The Empire, Greenskins, and Dwarves are all familiar to anyone who's put time into the previous games. The Vampire Counts, however, truly feel like their own unique race, and go beyond being just a Warhammer-tinged skin to this long-standing series.

The Vampire Counts use massive waves of undead which are bolstered by giant bat creatures to overwhelm their opponents. The leaders and generals of this army also pack quite a punch. In previous Total War games I would hold my fragile commanders back for fear of losing them. Not so with the Counts. Their "legendary lord" Manfred von Carstein is an absolute beast in combat. Not only able to hold his own against multiple units, he can enhance nearby troops with magic. While not invincible, I was far more comfortable having my leaders be the tip of the spear than I have been before. 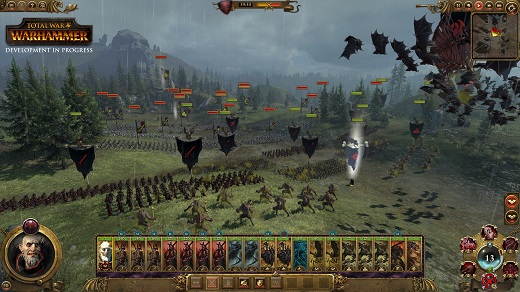 In other Total War games, if a general goes down it results in a massive army-wide hit to morale which can quickly make a situation spiral out of control. Units start to break, flanks start to collapse, and chaos rapidly engulf your forces. The Vampire Counts are different, though — they are completely immune to morale. Being undead comes with the benefit of not being afraid of death. This alone is the most radical change to gameplay as morale has traditionally played a large part of protracted battles. Instead of fleeing the fight when surrounded, the Vampire Counts start to crumble, increasing the amount of damage they take. While this means they will stick around until the last zombie drops, it does make them paper tigers, to a degree. Positioning is even more of a necessity because of this crumbling, otherwise that newly-raised army will quickly evaporate into dust.

The Counts seem to thrive on having a massive horde of troops, backed up with a few extremely powerful specialized units. Their lack of ranged combat meant I had to throw everything I had into melee, but they get a few tools to deal with their opponents' missile attacks. Swarms of bats can quickly traverse the battlefield, harassing archers and distracting them long enough for the skeletal hordes to close in. To deal with larger siege weaponry, they have the vargheist. A massive bat-golem-nosferatu… thing, the vargheist can easily turn the tide of most conflicts. In fact, it might be a too powerful, as more than once I was able to win a battle with it alone. 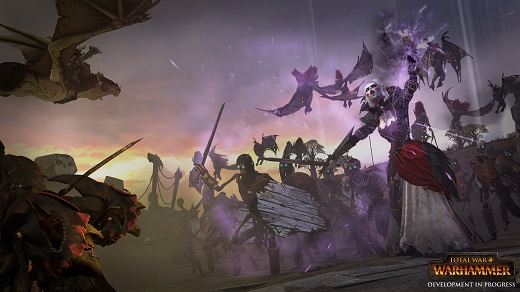 The strategic map also plays out differently for the Vampire Counts. Any territory they control is corrupted, dealing attrition damage to invading armies and softening them up with every step into my lands. Unfortunately, this works in the other direction as well, with the undead taking damage whenever they leave their dark, twisted empire. This makes spreading their vampiric corruption before invading almost mandatory, tipping their hand towards what their next move is going to be. Anything outside of a brief raid into enemy territory will be telegraphed well in advance.

Finally, true to their necromantic nature, the Vampire Counts can raise the dead. Units can still be bought with the Vampire Count's currency, but can also be replenished at the end of each battle. Any surviving unit has a chance of restoring a handful of troops, and the Counts themselves can summon additional forces from nearby battlegrounds, letting them expand their armies while on the march.

I had a fantastic time with the game and wanted to keep playing well after the 90 minutes I had. The Warhammer setting has given fresh life to a franchise that I felt was growing increasingly stagnant with recent offerings, and I'm looking forward to getting my hands on this one again.

Total War: Warhammer will be out for PC on May 24th.