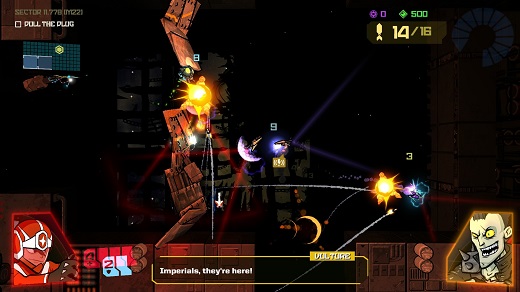 LOW Having to replay an entire season due to a bug.

WTF Where did season 5 go?

GALAK-Z is a perfect example of style over substance, and it cashes in hard on nostalgia, from its 80's-inspired art design to the simulated VHS tracking lines found on the option menus. Unfortunately, the nods and callbacks start to wear thin after a few hours, turning GALAK-Z into a competent, but ultimately forgettable roguelike space shooter.

As the game begins, players take control of a spacecraft that can turn into a robot. Progression is structured in episodes and seasons. Each season consists of five episodes, which in turn are made up of one or two objectives. While a predetermined boss caps off each season, the game is otherwise randomly generated.

Piloting the fighter is quite chore at first. I found that fighting back inertia while navigating the hazard-filled corridors of the 2D environments was a hassle initially, but once I got the hang of things, I found that those same dangers could be used against my enemies. What I couldn't evade, I could usually slam against an explosive tank or into a pool of lava.

In terms of offense, the robot mode comes with a handy shield and sword that's slow, powerful, and perfect against lumbering opponents. The quicker enemies require more finesse, so changing back into the fighter is the answer. It's nimble, has good ability to dodge, and the increased combat range of missile and lasers are the go-to for frantic battles.

Once the controls started clicking, I found the core combat to be excellent. The ship's ability to effortlessly fire off a swarm of Macross-like missiles brings back memories, and changing into a Gundam-style mech to mop up survivors is satisfying. Each encounter is a tense and exciting dance where the slightest mistake can have severe consequences, but all the tools needed to survive are there. In the hands of a skilled pilot, the action looks impressive—juking over incoming fire and swinging around behind an enemy, then getting off a few rounds before quickly transforming and pulling up a shield to block the counterattack is an absolute joy when it can be pulled off. These moments are what make GALAK-Z.

While the combat is indeed great, it's unfortunate that I saw almost everything the game had to offer after only a few hours.

As with many other games in the roguelike genre, death is permanent and will reset the entire season back to the first episode. This is perfectly acceptable for someone (like me) who enjoys them, and it's certainly the nature of the roguelike beast. The problem is that there just isn't enough content to keep the replays interesting.

Unlockables come too infrequently to give a sense of progression, and the generated missions are little more than pull X, destroy Y, or capture Z and return to an exit point. The environments get stale quickly since they only alternate between hollowed-out asteroids and derelict space wreckage. A good roguelike always keeps things fresh, but GALAK-Z punishes with its tedium.

Adding insult to injury, there were more than a few times when a bug would cost me a run, sending me back to the start of a season through no fault of my own. For instance, one mission required me to bring back a data core, but the game glitched and I was unable to transform into a mech (required to grab objects) which forced me to toss my progress out the window. A different glitch later kept me from using my shield, which left me a sitting duck. In addition, framerate tends to drop during the busier encounters, which is a death sentence for a game that requires precision and reflexes to survive.

Despite my complaints about its formula, I can't fault the art direction. GALAK-Z looks gorgeous, and liberally borrows from every major 80's sci-fi or mecha anime that found its way to the States. Macross missile swarms zoom across the field, exploding in satisfying circles of yellow fire and smoke. Pretentious, quasi-British accented aliens who could easily be from Voltron overconfidently taunt before meeting their end. Even the hero's home base resembles the Space Battleship Yamato with its two-tone naval color scheme. Unfortunately, coolness and nostalgia aren't enough to keep things entertaining for long.

Frankly, GALAK-Z feels like a Steam Early Access game. The lack of content, repeating environments, glitches and bugs, framerate issues, and the final season of the campaign being listed as "coming soon" (yes, really!) scream that the work isn't finished. This lack of completeness is doubly frustrating considering how much promise there is. Given a few more months of refinement and a larger scope, developer 17-BIT would have a hit. Instead, it's just a great idea that doesn't meet the standards set by its peers. Rating 5.5 out of 10


Disclosures: This game was obtained via publisher and reviewed on the PS4. Approximately 12 hours of play were devoted to the single-player mode, and the available content was completed.

Deaf & Hard of Hearing Gamers: What dialog there is comes fully subtitled, and there was nothing that required any audible cues to complete.

Hey Tom, This is Steven, the guy who wrote the review. First off, thanks for reading the post as well as the thought out and respectful reply. The internet can sadly lack in civility and it’s always refreshing to see it happen, so thanks for that! I think we are going to disagree about how shallow the game is or isn’t, but to each their own. That said, there is something we can both agree upon… [quote=tom]The rogue-like-ness is a crutch too. completely unnecessary and is far more about punishment than tension.[/quote] I ABSOLUTELY agree here. I would have enjoyed… Read more »

I disagree that this game is style over substance. I found the combat very enjoyable like you did. A new combat style for space 2d shooters that I feel renders old school 2d shooters of this genre almost irrelevant ( Imo, Irrelevant already). Sure the combat itself is all this games got, but when it’s this good, that is the substance. Galax-z combat reinvigorates this genre that desperately needed it. The environmental hazards such and spikes, lava you can shoot, rock embedded creatures that can grab, shoot-able blooms that can slowdown ships or damage shields in the asteroid levels –… Read more »

Thank you Steven. Just to clarify about the shallowness of Galak-z; I’m defiantly with you there. All the shallow and damaging to the enjoyment of this games structural issues, outside of the un-shallow combat which I think is terrific, is what really harms this game. It’s just that the combat keeps pulling me back in. I’ve finished it now. And oh boy, how about that last boss battle. Pew-Yu. Just a long drag of circle-strafeing a boss that you have to pretty much spend the whole time shooing off screen. -1000 points. Game has good and bad camera positioning but… Read more »