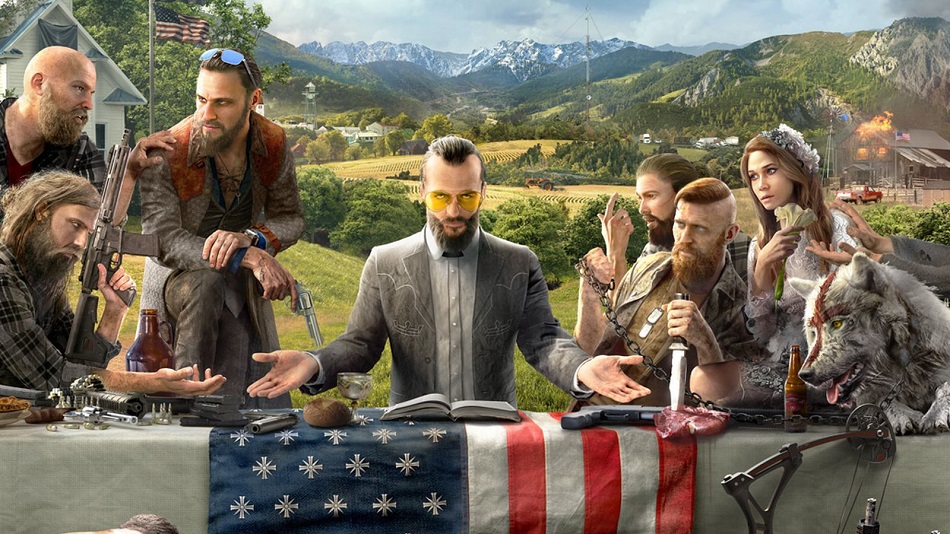 It’s upon these tenets that the citizens of Hope County, Montana have built their lives. These are the pillars by which they live, work, and teach their children. These are the fundamental convictions that the residents of this small, middle-American county turn to for guidance in how to come together as a community.

…They are also the tenets that a dangerous cult twists and perverts for their own ends in Far Cry 5. 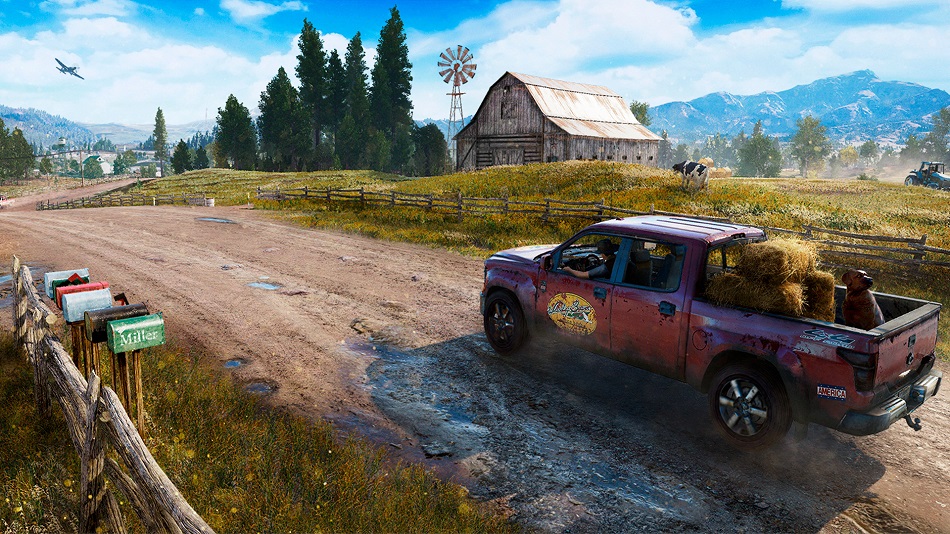 Far Cry takes the series into a radical new direction. Gone are the jungles and exotic locales from the previous games. In their place, the American Great Plains — an open and lightly populated area comprised of flatlands, forests, and mountains. Montana is one of the largest states in terms of square miles, but one of the least populated in the nation. For the residents of these sparsely-inhabited areas, they might as well be city-states all their own.

It’s in this isolation that Joseph, the so-called “Father” of a local survivalist cult, is banking on when he makes his move to forcefully conscript the residents of Hope County who have yet to be indoctrinated. Joseph, along with his siblings Jacob, John, Faith and their militia of militant followers, aim to bring the entire area under their control by any means necessary. They believe that “souls don’t save themselves” and will make everyone see the light… Well, their version of it anyway. 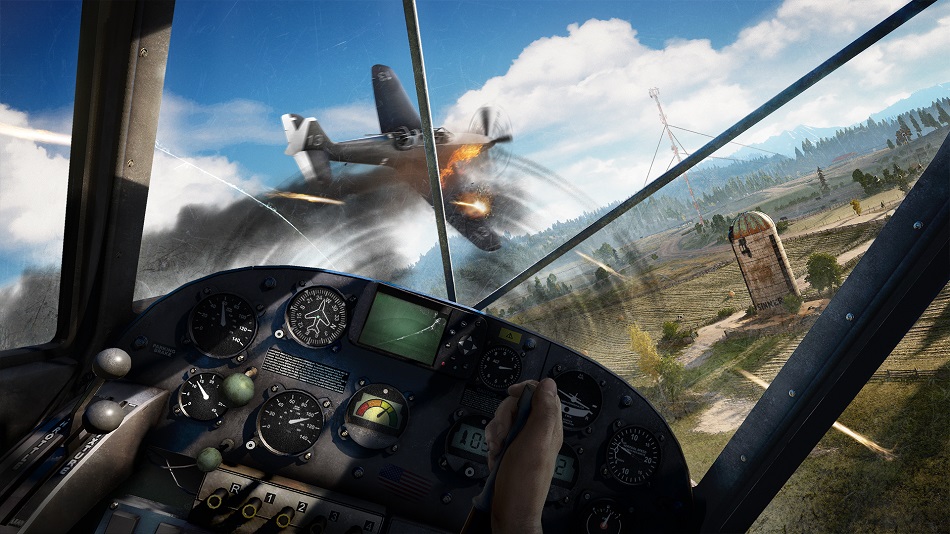 When the federal government issues a warrant for Joseph’s arrest, everything starts to fall apart. Joseph’s followers are unwilling to allow their savior to be taken away by those they consider to be the enemy, and violence quickly erupts. This altercation is the sign Joseph needs to begin “The Reaping”, which is where the game begins.

Of course, not every resident of Hope County is going to go along with this willingly and it’s up to the player to form a resistance against this nefarious group. The three pillars of freedom, faith and firearms are not owned exclusively by Joseph and his fanatics. Those living in the shadow of his ideology also hold the same pillars dear to their hearts, and will fight alongside the player to rid themselves of this evil. 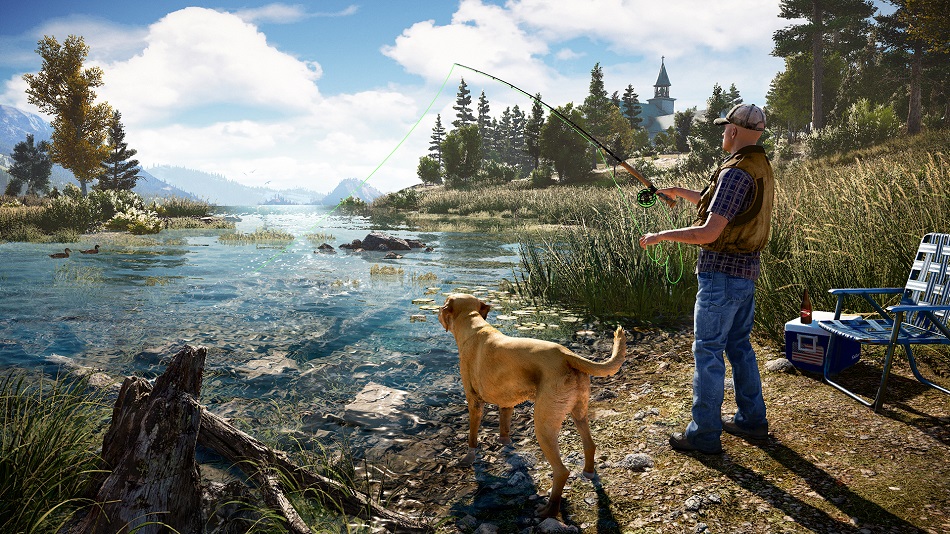 In light of what’s going on in America in the current political climate, it would be easy to accuse Ubisoft of attacking the Right, or to dismiss this game because it seems to portray “fly-over” country as backwoods racists who cling to guns and religion out of fear.

However, after attending a Ubisoft reveal event, the impression I left with was something different — what I saw were people fighting back, like a woman trying to defend her bar from the zealots that have torn her family apart, or a crop duster converting his livelihood into a weapon of war to save his homestead. These are the people alongside the player struggling to keep their homes from being overrun by Joseph’s insanity.

The belief in freedom, faith, and firearms represents a desire to live free from oppression, the belief that good is on their side, and the means to protect themselves from those who would do them harm — not the dark reflections that Joseph and his cult have twisted them into. Far Cry 5 will ask players to explore these beliefs, be they for good or ill, and I’m ecstatic to see it happen

It’s really amazing. I believe it will best on from far cry series. Amazing graphics again and the story is superb.i think it is better than Acheter Far Cry Primal

I’m not excited. As a New Zealander already oversaturated with America’s problems, this will be yet another game worthy of skipping. Although, I do appreciate Ubisoft tackling the subject, and certainly hope there is nuance in the presentation, I would have preferred to have seen Primal receive development through a sequel.

I get that America can suck up the oxygen in a room when world politics are mentioned, but I would try to see if you can look past that and at the game itself, rather than the location.

In the end, it’s about a cult to absorb up a small town. Sure it’s tinged American all over, but if you liked FarCry 3, 4, Primal, et al. when it came to gameplay, then I would at least take a look at how Far Cry 5 plays.

Yeah, that’s a fair statement. When I heard 4 was much the same as 3, I didn’t bother since I got everything I wanted out of 3 and plus, the island inhabitants were Maori/Polynesian, so it had that personalised feel for me as I recognised every part of their lingo and accent. I went back to FC2 and had a great romp through that as well. I haven’t played Primal yet, but it was nice to see some new mechanics and the completely unrelated setting, so if a sequel built on that, then that would be a game I would… Read more »

You are right my friend. I agree with your word