It's the journey, not the destination. 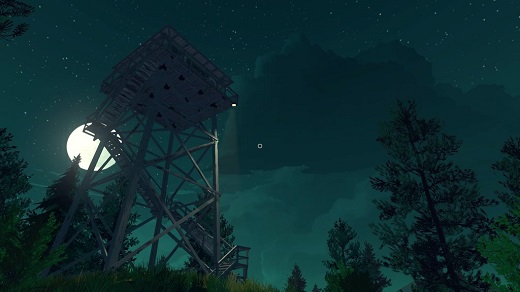 WTF How did I miss the turtle everyone else found?!?

The knowledge I had of Firewatch before I started it was quite limited. In fact, all I knew about Campo Santo's debut was that it took place in the late '80s, the setting was a national park in Wyoming, and that the player's job was to watch for forest fires.

I can't stress enough how important it is to go in with this same amount of knowledge. At its core, what made Firewatch so enjoyable were the genuine feelings of wonder and suspense that came from not knowing. If you already intend to play this game, stop reading now.

For those who might need a bit more convincing, what I can say is that Firewatch is the very definition of a walking simulator. Players who don't enjoy first-person wandering games like Gone Home or Everybody's Gone to the Rapture will find little to enjoy here. There are no puzzles to be solved, no combat to be had, and no quicktime events when rappelling down a cliff.

There is, however, is a sizable plot of Shoshone National Forest to be hiked.

Main character Henry is given a compass, a radio, and a map that has to be pulled out and held to be used—no handy minimap in the corner of the screen here. This sense of being in the wild and using landmarks to get where Henry needs to go is one of Firewatch's greatest strengths. While a few portions of the woods are gated off, the developers are more than happy to let the player explore on their own, provided they have the gear to get there.

The story starts with a brief text prologue where the player can choose aspects of Henry's background and why he took the lonely job of becoming a fire lookout. It quickly establishes that Campo Santo isn't going to hold back from emotional gut punches—ironically, they touched on one of my greatest fears in the game's first few moments. Firewatch had me invested from the outset.

Once Henry starts his job proper, the feelings of isolation begin. Being a fire lookout is a solitary life with little (or no) interaction with others, and Campo Santo did a wonderful job of making me feel alone in the wilderness. While there are traces of others scattered about the area—an abandoned backpack here or a few empty beer cans there—Henry is totally cut off from people during his summer-long tenure. The only other person in his life at the tower is Delilah, his boss and a neighboring lookout who maintains her own outpost visible in the distance.

Their only means of interface is via radio, but their relationship is extremely well-written and believable. Henry's a well-meaning but flawed man and Delilah looks into the bottom of a bottle when things get tough, but they play off each other beautifully. The dialog choices offered during play gave me some latitude in how their relationship played out, and both characters feature fantastic performances from their respective voice actors.

As the story unfolds, my imagination ran wild with possibilities. Locked gates, signs of bears, and a few missing people added to the suspense of exploring the forest. Delilah stoked the flames by nurturing the assumptions, paranoia, fears, and theories I had about what was going on in the forest. As Firewatch built up to its conclusion, my mind was in full-on conspiracy mode.

Unfortunately, the scenarios I crafted in my own head were far more interesting than what the big reveal finally was. In fact, the true finale was more than a little anticlimactic. It was serviceable enough within the confines of the plot, but Firewatch pushes players down a rabbit-hole of mystery with one red herring after another, reinforcing misconceptions about what's actually happening until the disappointing end. The finale might work well as a book or a movie, but game players are quick to embrace the fantastic, and as such, it's frustratingly mundane.

Is Firewatch a great experience? Enthusiastically, yes. It's gorgeous, emotionally draining at times, well-written, exceptionally acted, and so full of suspense that it made me want to constantly push forward in order to learn its secrets. It was wonderful to explore the world and to listen to Henry and Delilah open up to one another about their lives. I'd easily recommend it to anyone who values a good, mature story. While the final destination leaves much to be desired, the trip was well worth it. Rating 9.0 out of 10


Disclosures: This game was obtained via publisher and reviewed on the PC. Approximately 4 hours of play were devoted and the game was completed.

Parents: The game is currently unrated by the ESRB. I personally would say it would be rated M if it was. While there is no gore or violence, there are several adult issues that get brought up and more than its fair share of harsh language. It's an adult story meant for adult players.

Deaf & Hard of Hearing: The game is subtitled with names listed to show who is saying what. There is little to no background music, but it does get used for emotional effect from time to time.

Remappable controls: Firewatch allows for the remapping of controls on the keyboard, but not for a controller. For controllers there are options for left or right handed players.

Potential minor spoilers below. I thought the game was phenomenal; possibly the best writing I’ve seen in a game to date, and the voice acting was excellent. I didn’t have the same issues with the red herrings as you did, Corey. Misdirection is pretty standard in mysteries, so I thought it was fine here. I did have some issues with the late-game plotting though, which got over-elaborate when Camp Wapiti was introduced, and I’m not sure that section of the game holds together. However I thought the ending was fantastic and not a damp squib at all. This may have… Read more »