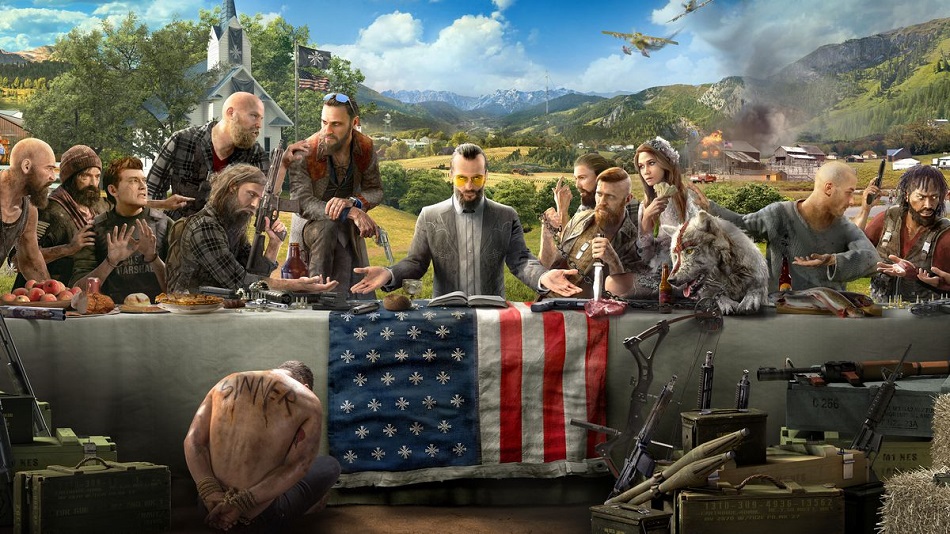 HIGH Watching a flaming turkey light a field on fire.

WTF The conclusion and everything about it.

Far Cry as a franchise has always been formulaic. Liberate outposts, take in the exotic scenery, and push back against unhinged villains. Far Cry 5 checks all these boxes, but strips away the garbage weighing it down. It doesn’t build a better mousetrap, so much as it flays away the parts that never worked. The result is a predictable, albeit extremely satisfying sandbox of chaos, extreme sports, and firearms.

This time around, the exotic locales of previous entries have been swapped for rural Montana. While the setting is more provincial, there’s still plenty of wilderness to get lost in. All of it is gorgeous, and crafted to the point where someone with no knowledge of the game saw me playing and asked if it was set in Big Sky Country. Despite being so recognizable, FC5 takes place in the fictional area of Hope County, which is filled with places to explore and stories about those who live there.

Of course, it wouldn’t be a Far Cry without a good villain to serve as a catalyst for the plot. Here, it takes the shape of a doomsday cult known as The Project at Eden’s Gate, led by their charismatic “Father” Joseph Seed. While Seed isn’t nearly as quotable as former antagonists Pagan Min or Vaas were, he does come off as less cartoony due to an excellent portrayal by Greg Bryk. The Father truly does believe “The Collapse” is nigh and that God has tasked him with the preservation of his flock.

Unlike prior games, the player character is customizable to a degree. I could pick between race and gender, as well a small selection of outfits, more of which are unlocked as the game progresses. However, none of this matters since the dialogue is gender neutral (everyone called me either “Deputy” or “Rook”) and my character is completely mute. 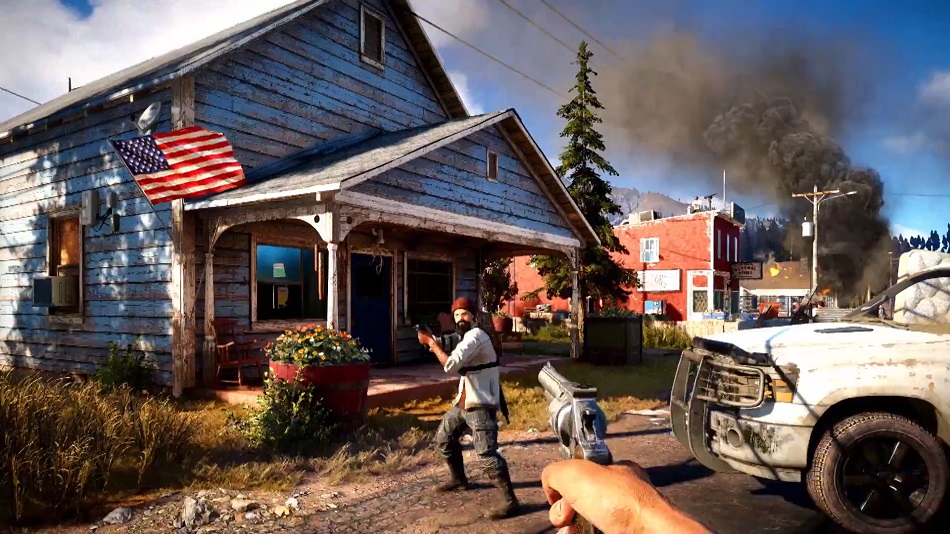 After the game’s intro, Hope County gets chopped up into three regions, each supervised by one of Joseph’s family members: Jacob, John, and Faith. Of course, this directly translates into a familiar Far Cry gameplay loop — help people fighting back in each region, blow up cult property, and be a general thorn in the side of the local lieutenant until an opportunity arises to take them out.

My biggest problem with this divided region idea is that none of the stories between them are connected. It’s as if I was playing three separate games.

For example, I started in John’s region and helped to liberate a small town occupied by cultists. I was introduced to bar owner Mary Fairgrave and a gun-in-a-bible packing pastor Jerome Jeffries. From there, I teamed up with local aviator Nick Rye and helped him fight off cultists attacking his home. I grew to know these people, and generally liked them. Then I finished the area and never heard from them again except for a cameo at the end of the campaign. When I moved on to the next region, I was greeted with an all-new cast of characters.

This disconnect between the areas creates a story that is significantly less than the sum of its parts. It’s a shame because while the characters are well-acted and there are moments of genuine emotion, none of it builds to anything. What I did in one part of Hope County had no effect at all on the others, and the game suffers greatly from this lack of narrative cohesion.

Mechanically, FC5 offers a few new things that haven’t been seen in earlier installments. One of the largest is the Guns for Hire system. This addition allows the player to bring up to two NPCs along, many with their own specializations. The previously mentioned Nick Rye has a plane, perfect for strafing cultists in open fields. A massive grizzly named Cheeseburger serves as a living tank, drawing fire and savaging opponents with his “right to bear arms.” Unfortunately, these partners don’t participate in cutscenes, important dialogue, or in anything else beyond a few quips here and there. It’s a big missed opportunity when compared to how rich similar NPCs are in games like Dragon Age or Fallout. 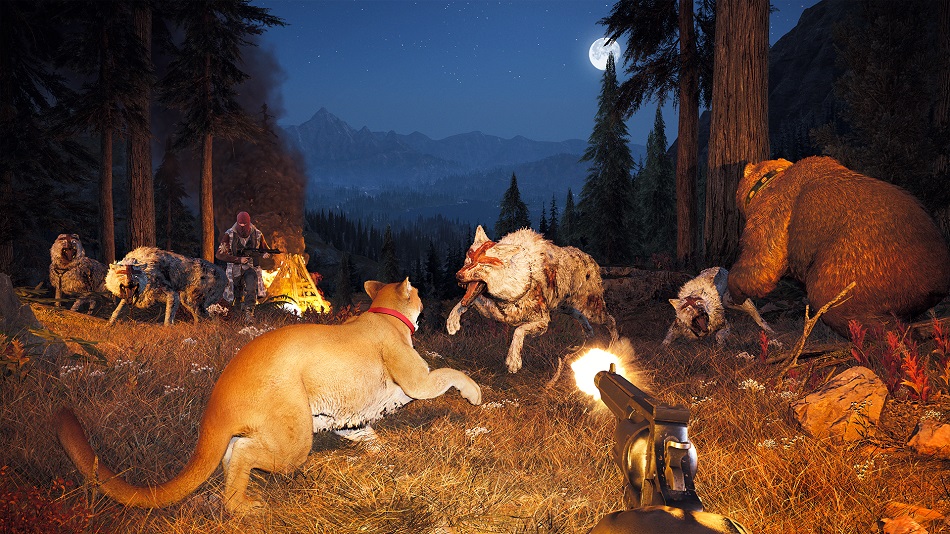 Another change to the formula is the perks system, which streamlines a lot of old elements into one unified scheme. Instead of doing extremely specific tasks to upgrade particular skills, everything is pooled into a common point bucket. These points are earned in a variety of ways, like getting kills for each weapon class, hunting and skinning animals, catching different types of fish, and so on. Every skill or upgrade comes with a set value, so now, instead of hunting a specific number of rabbits to get an additional weapon slot, I just need to see how many points it costs and spend them from my amassed pool. It’s an elegant fix that removes most of the grinding that I could never stand in the other games.

For those who want to tackle The Project with a friend, FC5 is co-op from top to bottom. It works well with little to no lag that I saw, although one quibble I had is that only the host gets credit for finishing a mission — be prepared to play some of the content more than once if both players want credit for advancing. There’s also a multiplayer level editor called Far Cry Arcade, although I found it fairly forgettable, it’s still nice to have and completely optional.

So, readers who made it this far into my review are probably wondering about the politics of Far Cry 5 considering how the game was presented in pre-release coverage. So let’s talk about it.

Clearly, many people were wondering if there was going to be some grand political statement made with the game. This is not the case. In fact, Far Cry 5 goes out of its way to avoid stepping into politics as they relate to current times. The biggest theme to take away here is that extremism is bad. The cult employs a “by any means necessary” mentality and an authoritarian ideology that makes outside thinking intolerable and punishable by death. However, even here Ubisoft doesn’t make this the focus of the campaign. Those hoping to see current events mapped onto the action in Hope County will be disappointed – don’t expect more than a refined Far Cry experience and the ability light a turkey on fire and run it over with a farming combine.

While Far Cry 5 doesn’t reinvent the wheel and is not a massive change of direction for the series, it does fix many of the problems I had with earlier entries, and it jettisons a lot of unnecessary baggage that had accumulated over the years. The end result is a lot of mindless enjoyment with memorable characters that go to waste thanks to the disconnected plot. It’s not going to be my game of the year, but as a fan of this formula, I still found it worth the time I put into it. Rating: 8 out of 10

Disclosures: This game is developed by Ubisoft and published by Ubisoft Montreal and Ubisoft Toronto. It is currently available on PC, PS4, and XBO. This copy of the game was obtained via publisher and reviewed on the PS4. Approximately 30 hours of play were devoted to the single-player mode, and the game was completed. Two hours of play were spent in co-op and Far Cry Arcade combined.

Parents: According to the ESRB, this game is rated M and contains Blood and Gore, Green Kool-Aid, Intense Violence, Sexual Themes, Angry Wolverines, Strong Language, Unusually Large Fish, and Use of Drugs and Alcohol. This info is found at ESRB.org. This one is a hard M. Torture, forced and recreational drug use, and a never-ending stream of cussing from start to finish.

Deaf & Hard of Hearing Gamers: While the game is mostly subtitled, there is the use of one particular song that is relevant to the plot. I won’t go into details here due to spoilers, but hearing it is not only is important for a part of the story but is also needed for context in one of the endings the game has. The options do have a choice for expanded subtitles that might give the appropriate context, but due to the nature of how Far Cry 5 saves its game, I was unable to go back and verify this.

Remappable Controls: No, on the PS4 the controls are not remappable. They have limited options to switch for left handed players, but they are not fully customizable.

Colorblind Modes: There is one colorblind setting.

SPOILER ALERT ! AVAST THYSELF or READ AHEAD
I am Deaf – besides being unaware of the song and its relevance to the ending, I was told that the radio reported of tensions and chaos throughout the world which would explain the blooming mushroom that appears for one of the endings.

Steven Brown
Reply to  Mark B

Sadly I didn’t hear about those radio messages until well after I finished the game. I was almost never in a car to actually have the radio on myself. Thanks for the update and dropping by.