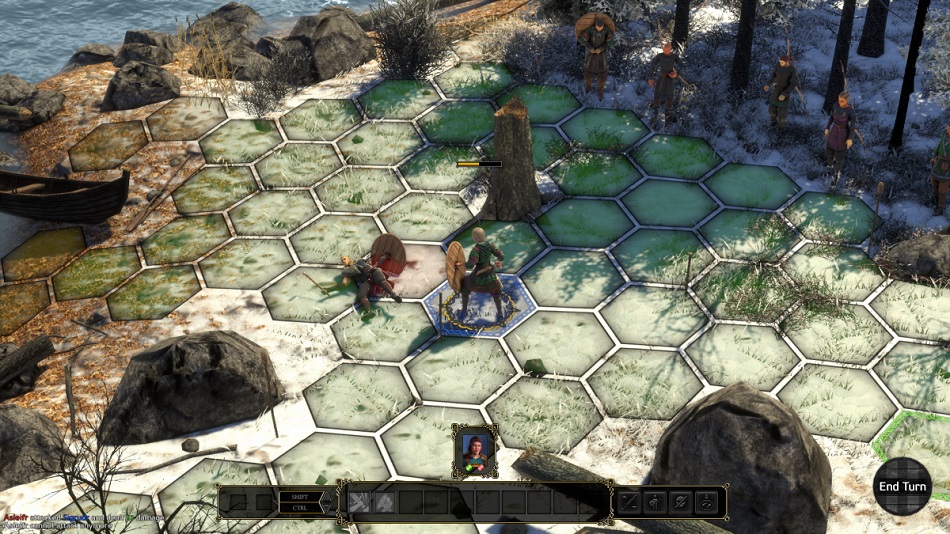 HIGH The combat is enjoyably satisfying.

LOW There are more bugs than Vikings in this game.

WTF Yeah, my clan color is hot pink. Fight me.

I’ve never rooted for a game as hard as I did with Expeditions: Viking. On paper, it sounds like everything I could want — turn-based strategy-RPG, branching story choices that can dramatically affect the setup of battle, and it’s all clad in a Norse coat of paint. Unfortunately, the reality of Viking is that it’s such a jumbled mess of technical bugs, game-breaking glitches, and terrible optimization that it forced me to give up after four separate attempts.

Let’s address the elephant in the room without delay — I was not able to finish the game, and it wasn’t for lack of trying. In fact, had to restart Viking no less than four times due to game-ending bugs and glitches.

Once the game wouldn’t register that a conversation took place, halting my story progression. In another instance, an NPC wouldn’t interact with me because it thought it was still in combat, forever trapped fighting an enemy in his own mind. Other times, the game would crash to desktop when I would leave a building, forcing me to roll back to a save hours earlier. In the 30-plus hours I sunk into Viking, more than half of that time was replaying the same segments over and over again. After hitting another game-breaking issue —  a neverending loading screen — I gave up.

The tragedy here is that under the myriad performance issues Viking has, there are the makings of a pretty damn good game. For example, it offers dark moral choices that go beyond the standard good/bad dichotomy. An early example was when I was compelled to make an elderly patriarch and his family answer for the actions of his sons. By this point, I had already killed some of his children who challenged my rule, but since they were dead, someone else had to answer for their crimes. There wasn’t what I would consider a “nice” option here. I was able to see that similarly weighty decisions are peppered throughout the story, too. It’s a brutal, harsh life in this world and I loved that Viking doesn’t dance around it. 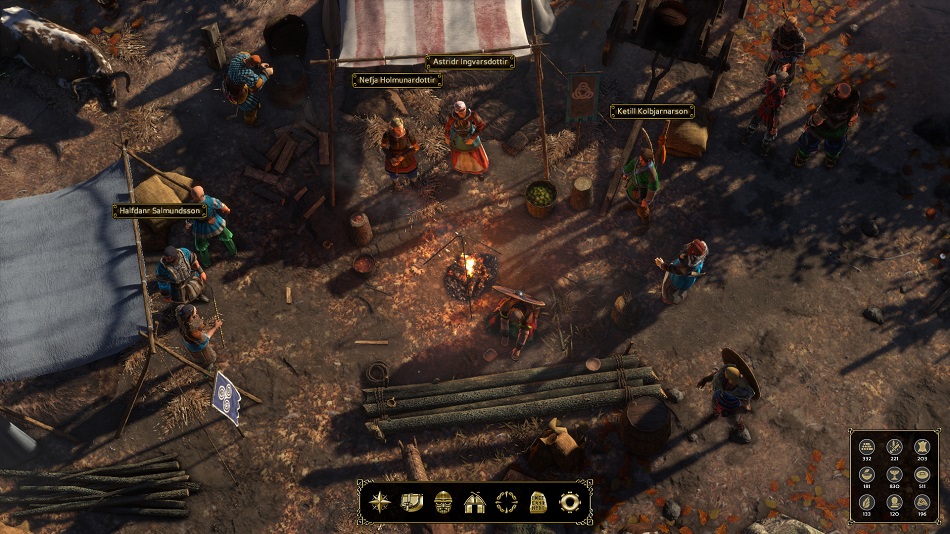 Technically, Viking isn’t the prettiest thing to look at by any stretch of the imagination. Even when compared to what I would consider graphical contemporaries such a Wasteland 2, it looks dated. It’s nothing that holds the game back, but on top of the bugs, it does give the experience a low-budget feeling overall. That said, there are a few times where the backgrounds are truly beautiful to behold. A plane of ice can reflect the sun just right, or a hint of falling snow over a frost-covered island would occasionally make me sit up and take notice. These moments are fleeting, however, and quickly overshadowed by dull character design.

Combat is turn-based on a hex-grid and has shades of the recent XCOM games all over it, but isn’t a knockoff by any means. It’s violent, engrossing strategy, and can be surprisingly challenging. However, be warned that there are some extreme spikes in difficulty that appear throughout what I played. I’m not sure if it’s because I picked poorly from Viking‘s overly complex stat system or I just didn’t have the right gear, but there are segments that were just brutal to finish. One moment I’d feel unstoppable, the next I’d be replaying the same fight over and over and over again.

Along these same lines, I found that the game is extremely poor at conveying information. Character creation offers a plethora of options to pick from, but gives minimal description as to how they’ll actually work in the game. Most of it needs to be discovered by playing, and while ambiguity in some games is exciting, it’s a detriment here.

I also took issue with Viking‘s forced timer. If specific conditions are not met before it runs out, the game ends. In principle, if done correctly, such as in XCOM or Dead Rising, a timer can add pleasant tension to gameplay. Here it just creates a frustrating sense of being tied to the critical path, fearful of earning a loss by enjoying the experience. It’s unnecessary and unwanted, and pulls away from the exploration side of things the very title of the game alludes to.

Expeditions: Viking could have been wonderful. I love its strategic combat  layered atop a real world setting that hints at the fantastical without ever crossing the line. It has intriguing moral choices that aren’t afraid to shy away from making the player pick between equally terrible outcomes, and it flirts with making the player both warrior and politician. I could have overlooked the timer and the lack of information, but what I couldn’t overlook is that in its current state, the game is outright unplayable. Rating: 4 out of 10

Disclosures: This game is developed and published by Logic Artists. It is currently available on PC.This copy of the game was obtained via publisher and reviewed on PC.  This game was played across two different PCs for a combined total of 32 hours and was NOT completed due to several game-breaking bugs. While I played for 32 hours, I was only about 15 hours into the game due to bugs causing me to repeat several sections multiple times.

Parents: This game has NOT been rated by the ESRB but, in my opinion, it would receive a hard M for the violence, blood, and the adult themes of the game. Players are in the role of a Viking, and let’s face it, they’re not known for their pleasant temperament. Blood, gore, and dismemberment are prevalent. It’s not as gratuitous as it could get, but it’s strong enough to warrant what I’d see as an M rating. One thing to note is that the gore can be turned off in the options, but it’s set to ‘on’ by default.

Deaf & Hard of Hearing Gamers: The game plays out similar to classic PC RPGs and as such, so every bit of dialog is fully subtitled and there are no significant audio cues. It’s fully accessible.

Remappable Controls: The game is fully remappable on the mouse and keyboard.

Thank you for an interesting review. I’m sure you have had all the problems you describe, but I must admit, that I’m surprised, considering the extensive work the devs have put in ironing out the kinks in the game since launch. My experience was much the same as yours when I started playing the game 2 days after launch, so I put it aside and waited for the devs to catch up with bugsquashing. I resumed playing after patch 1.05 and it played smooth as silk, no noticeable bugs, no delays. You are entitled to your views on the game… Read more »

Thank for reading and for being EXTREMELY thoughtful and respectful with the comments. That does mean a lot to me, even when you disagree. I gave this game roughly three~four weeks of various patches to see if things ever got better. They never did for me. Additionally, I wanted to double check to make sure it wasn’t just me that was experiencing these problems so I did a bit of research and I ran into several players who had the same issues. I’m aware that there are people who have played this game that never once ran into a problem,… Read more »