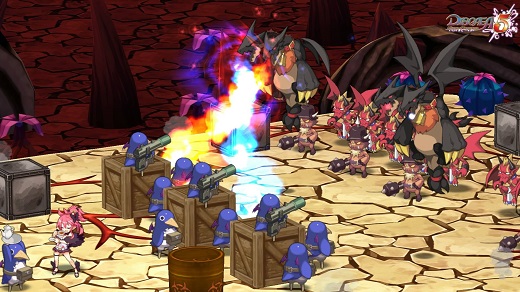 HIGH There is a ton of game here to enjoy…

LOW …but far too much is initially locked away.

WTF Where does Killia hide all that curry?

Disgaea 5: Alliance of Vengeance is the first Disgaea released for current-gen consoles, and the first I've spent any serious time with since Cursed Memories in 2006. To the untrained eye, it appears that very little has changed—the sprites are cleaner and a few systems are streamlined, but it's still about dealing ludicrous amounts of damage with over-the-top attacks via exploding penguins. To the hardcore Disgaea crowd, however, Alliance of Vengeance offers so much more. Once I was able to get full access to every part of my hub world after a tedious ten or so hours, the game blossomed into the min/maxer's paradise it's known as.

Story-wise, Disgaea 5 revolves around a massive inter-dimensional war. The despotic overlord Void Dark has been gobbling up all nearby netherworlds, and it's up to the "heroes" to stop him. All of the anime cliches are here: The brooding and stoic warrior, the spoiled rich girl, the musclebound idiot, the conniving strategist, and several more. All of them are thrust together in an attempt to stop Void Dark's ambition.

Much like the gameplay, the plot is lackluster for the first ten hours and the protagonists are unlikable. Even aggravating. Yes, I get that Killia is angsty. Yep, I fully understand that Seraphina has a lot of money and is completely spoiled. These two-dimensional portrayals hamstring the already-slow first act, dragging everything down to a crawl before getting to the good stuff. Once past the overwrought ten-hour tutorial, the characters start to reveal more about their motivations, and give themselves much-needed depth. While it's nothing overly praiseworthy, they get significantly better than the cookie cutouts they're first presented as.

So, what can returning Disgaea players expect in terms of mechanics? The SRPG basics are the same, and the Item World is still a thing. Leveling up my gear's stats to levels of insanity inside this pocket dimension is properly fitting of the franchise, and in fact, the Item World remains the absolute best way to grind.

New additions to the series include Chara World, which is essentially an Item World for characters. Playing out on a Mario Party-style gameboard, Chara World is a welcome change of pace from the rest of the game.

The concept of Squads is also new, giving access to various abilities in combat as well as around the hub world. For example, anyone assigned to the Capture Squad can use the capture skill in combat, stealing foes off the battlefield and throwing them in prison. From there, members of the Interrogation Squad put the spurs to them, breaking them to the point where they either join up as party members or help out in other ways.

One of the larger changes is the Revenge Meter. Essentially, everything on the map has a ticker which keeps track of how much damage has been dealt. Once someone has been hit enough or had enough of their allies die, they enter Revenge Mode. While in Revenge Mode, that character's critical hit rate will be 100%, skills will cost only 1 SP, and incoming damage is reduced by 25%. Enemies can also enter this state, so keep a close eye on who is enraged at all times.

When all these tools opened up for me and the gang was fully assembled, Disgaea 5 became the experience it should have been from the get go. With that in mind, I feel it's my duty to say that as an anime-styled hardcore strategy RPG, Disgaea has always been a niche game. For those who might be curious and haven't dipped into the series yet, picking up the basics of Disgaea has a learning curve that's more like a brick wall. Brace yourself. The investment of time and energy is worth it, though.

While Disgaea 5 definitely had me hooked once things got cooking, it's unfortunate that so much of the game is tucked away at the start. I understand not wanting to bombard newcomers with too many systems, but doling them out at a snail's pace over ten or so hours takes far too long, and runs the risk of alienating returning vets. I'd like to see these tutorial sections made optional for future installments, but the time I spent here was still worthwhile. Rating: 7.0 out of 10


Disclosures: This game was obtained via publisher and reviewed on the PS4. Approximately 60 hours of play were devoted to the single-player mode, and the game was completed.

Deaf & Hard of Hearing: Every bit of dialog is subtitled throughout the game.

Colorblind players: A special warning that is worth mentioning is that large chunks of the game involve a series of tactical puzzles that involve picking apart colored tiles in a specific pattern. This can become very annoying when you can't tell the difference between a color that makes enemies invincible and one that weakens them.