It's A Deadman's Party 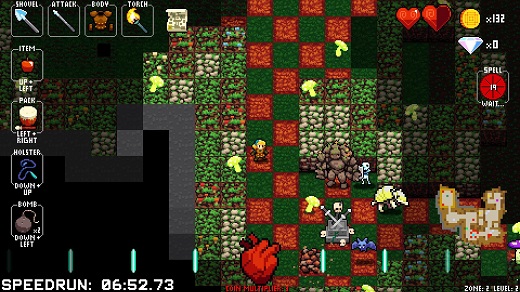 HIGH The soundtrack is fantastic.

WTF The shopkeeper has no business being as awesome as he is.

Crypt of the Necrodancer sounds absurd when taken at face value—it's a roguelike rhythm game where procedurally generated dungeons are navigated to a beat. By all measurements such an idea shouldn't work, but it does. The surprisingly fluid gameplay and catchy soundtrack keep this risky experiment from falling on its face.

True to its name, music is at the core of Necrodancer's gameplay. In most roguelikes, enemies move in concert with the player. Each time the character moves, everything else moves to counter. In Necrodancer, the enemies move in time with the beat of the soundtrack regardless of whether the heroine moves or not.

Due to the fact that enemies take turns even if the player doesn't, I was forced to step along with the tempo to keep from being overwhelmed. In addition, maintaining pace while moving builds up a coin multiplier. Having good timing allowed me to clean out almost every store that I came across, giving me the edge I needed to complete each floor. Keeping the beat feels extremely awkward at first, but it all starts to feel natural before long.

To be clear, let me emphasize that moving in time with the soundtrack is not a gimmick, nor something to be ignored. Later zones become frustratingly chaotic and a single mistake can bring a run crashing to a halt.

The key to success is learning the timing of every level, as well as how each monster moves. Each creature has specific AI assigned to them, and knowing their moveset is the path to victory. The encounters soon become dances, full of counter-moves and advances. Being able to anticipate the enemy's next step is required to defeat them, and this lack of knowledge when seeing new creatures makes them doubly dangerous.

Since the entire game controls using only four arrow keys (this can be remapped in options or substituted with a gamepad) Necrodancer features support for any PC-compatible DDR pad. While I wasn't able to test this out myself, I can only imagine that actually dancing in lieu of manual controls would spike the difficulty to obscene levels.

For those who want to change up the musical playlist, the soundtrack is fully customizable. I loaded up Dark Side of the Moon and it did a decent job at syncing up with the rest of the game. PROTIP: It's extremely satisfying to murder dragons to the vocals of David Gilmore.

Speaking of changing things up, multiple characters can be acquired to give the game a bit of extra staying power. Every new face alters the game in pretty radical ways. Eli, for example, replaces the normal weapon with an infinite supply of bombs to be kicked around. Monk takes damage with every bit of gold picked up, and Bard removes the musical component completely, turning the game into a more traditional roguelike.

While it feels fresh and there's a lot to like in Necrodancer, it also falls into the biggest trap most roguelikes do—the randomness is both its greatest strength and biggest weakness. No two floors are ever the same, giving a great deal of replayability. By that same token, some runs are immediately doomed to failure, spawning players next to a charging boss or a swarm of monsters. Sometimes I was able to get some of the strongest items in the game right out the gate, other times nothing but useless trinkets would drop. This drastic unevenness, even by roguelike standards, keeps Necrodancer from truly being great.

Necrodancer also has a fair amount of unlockables, but it could use more. Diamonds found in each level can be spent to permanently increase stats such as health and coin multipliers. Diamonds can also be used to add weapons and trinkets to the item pool, several of which are far better than the stock selection. Sadly, I was quickly able to clear out the shops of all upgrades, rendering diamonds useless after only a few hours of play.

Complaints aside, the uniqueness of the concept makes the game more than worth checking out. It would be easy to dismiss it as a gimmicky design overall, but by forcing the player to act quickly, it stands apart from its turn-based siblings and gives it a flavor all its own. The wild unevenness and lack of items hurts it in the end, but it's to the developers' credit that Crypt of the Necrodancer never gets rotten. Rating: 7 out of 10


Disclosures: This game was obtained via publisher and reviewed on PC. Approximately 10 hours of play were devoted and the game was completed with several of the alternate characters.

Parents: As far as I can tell, this game has not been rated by the ESRB. I personally found nothing objectionable that would drive it above a T rating. There are several cartoonish takes on zombies, skeletons, and ghosts which are all family friendly.

Deaf & Hard of Hearing: Music is a large part of the game. It is possible to use the icons that scroll at the bottom but I would highly recommend against it.