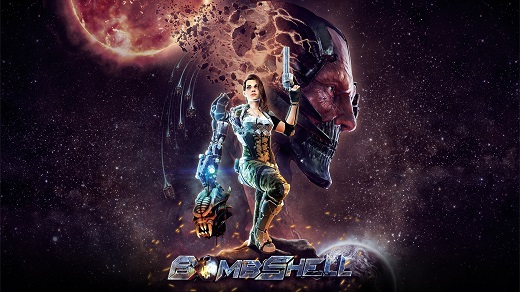 Published by 3D Realms and developed by Interceptor Entertainment, Bombshell is a top-down, twin-stick action-RPG with an emphasis on the action. In my brief hands-on with the game, I was quickly reminded of Smash TV, Total Carnage, and other similar titles from the early-to-mid 90's, which makes perfect sense because it comes from the house that created Duke Nukem.

Delivering cheesy one-liners while ripping off the heads of her enemies, protagonist Shelly "Bombshell" Harrison would be right at home with other action heroes of that bygone era. Equipped with a cybernetic arm and eight unlockable weapons, Bombshell is all about kicking ass and taking names across three alien worlds as Harrison chases down an evil scientist. Bonus points go to the devs for having the scientist voiced by Duke Nukem himself, John St. John. 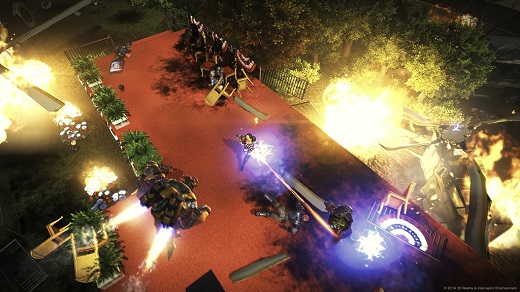 While the RPG elements take a back seat to the combat, they are there. For example, Shelly's skills can be expanded to increase the strength of her punches, and every one of Bombshell's eight weapons has their own leveling paths, changing her armament radically. Sidequests are scattered throughout the levels, giving incentives for killing a certain number of enemies or finding specific items. It's nothing too extravagant, but it adds a bit of purpose to the slaughter.

Not including the tutorial level on Earth, Bombshell has three separate worlds for Harrison to visit. The two shown so far are pretty stereotypical – one's an ice planet infested with zombies, and the other is a fiery, platform-filled landscape. Every level has hidden items to find, doors to open, and secrets to explore. Some are just simple health pick-ups or ammo, but blueprints for more powerful weapons are also found this way, so poking and prodding every nook and cranny in each stage is highly encouraged.

Be careful while seeking out those secrets, however, because Bombshell is surprisingly tough. Aliens hit hard and take far more damage to bring down than I initially expected. I died repeatedly in my brief time with it, but the presenters did note that the game had several balancing issues to work out, including the health of a few of the smaller creatures. With that in mind, they also mentioned that the difficulty is part of the design. Players who get frustrated easily might want to look elsewhere, but those wanting for an old-school challenge might find that Bombshell scratches the itch when it releases this November for PC and for consoles in early 2016.

I can’t believe this game is actually happening after all these years. Wasn’t this just a footnote in the Duke Nukem Forever development cycle? They created the Bombshell character to add a little variety, then the publishers thought it would be better if she had a game of her own, so they pulled her from the game, but then nothing ever happened with it? Nice that it’s finally happening, but I’m a little sad that DNF is no longer the story of a big mess that never happened, but rather the story of a big mess that dribbled out over… Read more »