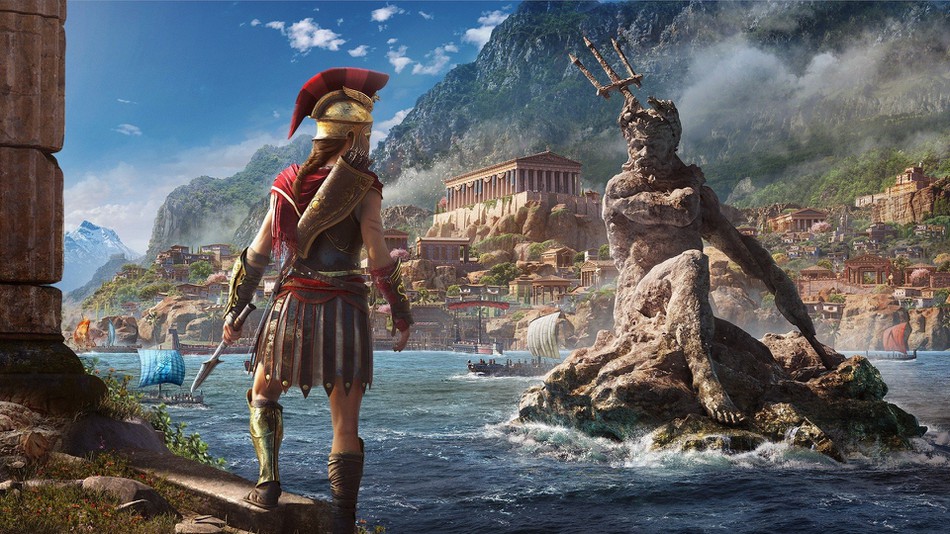 HIGH It’s one of the most gorgeous worlds I’ve ever seen.

LOW It’s bloated beyond any sense of reason.

The first 20 hours of Assassin’s Creed Odyssey had me convinced I had Game Of The Year material in my hands. By hour 40 I was still enthralled with exploring the world, though it was getting stale. Pushing past hour 60, I started longing for an end that would seemingly never come. Finally, at 80 hours, after days of endless grinding to finish off the three main storylines, I couldn’t turn it off fast enough.

Despite the prior entry being called Origins, Odyssey takes place a full 400 years before the Egyptian entry, during the onset of the Peloponnesian War in Greece. It’s a perfect world to be a mercenary in, which is exactly what protagonist Alexios (or Kassandra — the player can choose either) find themselves working as. The choice between the two is essentially cosmetic, so feel free to pick either one without any fear of missing out.

The world of Ancient Greece is hands-down one of the most beautiful landscapes I’ve ever seen in a game. Where Egypt from Origins was breathtaking in its own way, it was also largely uniform. Odyssey is filled with astonishing vistas of many different varieties — everything from sunken ruins with schools of Mediterranean fish floating past dangerous sharks to fields of scarlet and lavender swaying in the wind as workers collect their harvest. I recall standing upon the marble structures of the Acropolis in Athens for several minutes, just marveling at how gorgeous it all was.

Unfortunately, the world isn’t as exciting as it looks — the game offers the standard Assassin’s Creed formula of third-person open-world action, although it is refined. There are three skill trees focused on ranged, melee, and stealth, but there were only enough points in my playthrough to max out about half of it in the skills I wanted. For the most part, I stuck to skills that helped me hide, but standouts were an arrow that could shoot through walls and the hilariously unrealistic Spartan kick made famous in the film 300 — few things are as enjoyable a punting a guard from the top of a wall or kicking a bear down a cliff, so this skill comes highly recommended. 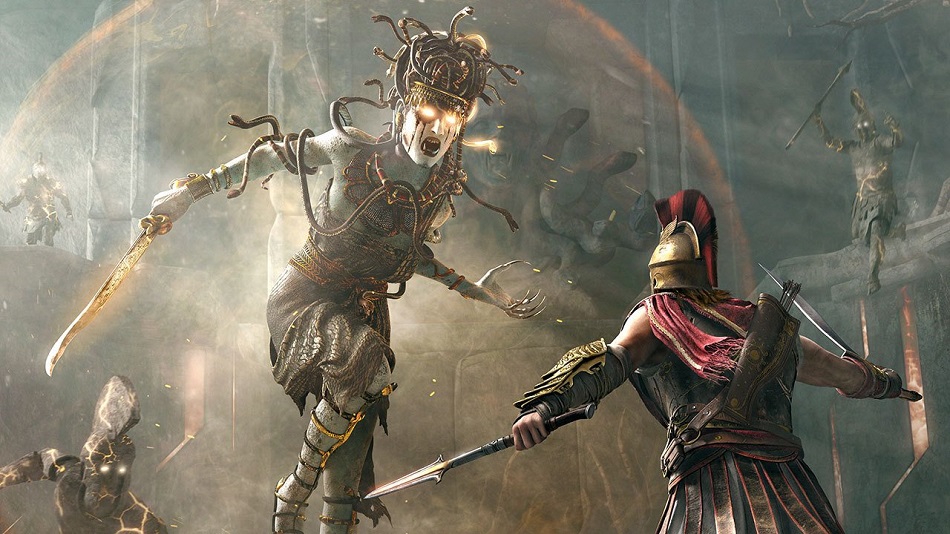 One welcome aspect of Odyssey is the return of ship combat with a focus unparallelled since Black Flag. Origins teased us with a few segments on a ship, but this Greek boat, the Adrestia, is as important as the main character. Resources can be gathered and spent to upgrade speed, damage, the hull, and even how many accompanying lieutenants can join on ship-to-ship raids. Spending time on the sea was a highlight, but many issues present in Odyssey bring the overall experience down.

For example, the map is massive and filled with activities, but most of them are boring and extremely repetitive. Greece is littered with a ridiculously high number of interest points consisting of forts, camps, caves, ruins, cities, houses, animal lairs, and more. However, the goals tend to follow the same formula of Kill X people, open Y chests, and collect Z items with a few extras tossed in here and there.

Furthermore, these points of interest all look the same. A cave is a cave no matter where it is. Most camps and forts are cookie cutter lookalikes save for Spartan vermillion or Athens azure banners showing ownership. Everything appears to use a generic template and starts to blur together because of it. While I could generally tell what part of Greece I was in because the trees and fields in Macedonia are different than those in Korinth, there are no discernable markers to differentiate one charred ruin or stone structure from another.

This problem becomes exacerbated when Odyssey moves into the endgame and the amount of grinding required to finish the campaign becomes apparent. Differences in level are massive here — enemies only one level higher are noticeably harder than equivalent targets, and to finish all three of the major plotlines I needed to hit the level 50 cap, else I’d be bashing my head against a wall of difficulty and hoping for a breakthrough. 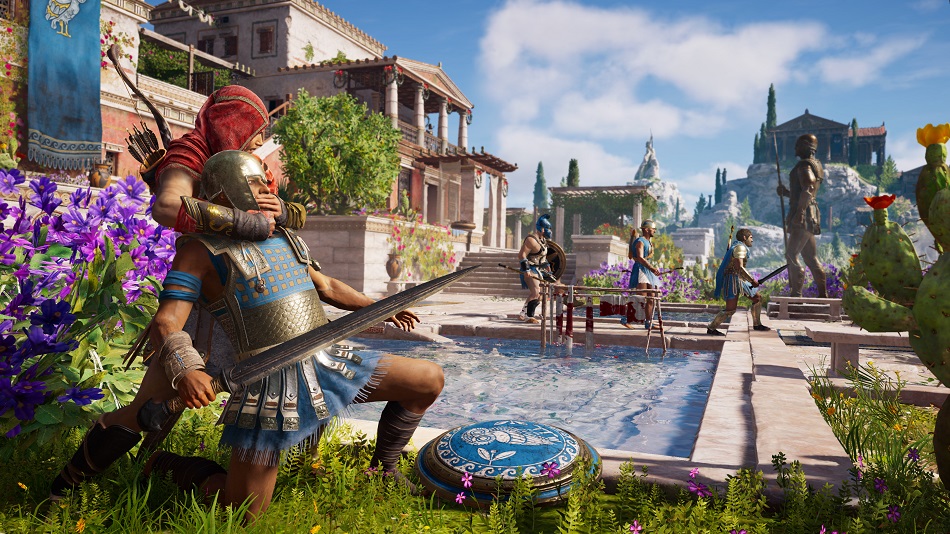 There are three major ways to grind out the experience required to level up. First, completely clear points of interest I mentioned earlier.This usually means going through a checklist of objectives at each site. Normally they consist of assassinating commanders, killing animals, looting treasure, or burning supplies. Doing so gives a paltry experience gain, but it’s better than nothing. Second, engage in daily quests found all about the world, many of which are little more than “go here, kill this thing” but that still doesn’t excuse that it’s extremely dull.

The third and most enjoyable are the side-missions. These can range from minor fetchquests to truly memorable stories such as helping a rebellion overthrow a cruel ruler and the resultantly tragic (in my playthrough, anyway) love triangle that can occur as it follows its course. Another quest involving a young man locking himself in a cage had me in hysterics. These quests are where Odyssey shines, and it’s annoying that so much of the experience apart from these sidestories is forgettable filler since doing these alone isn’t enough experience to get a character to endgame. I spent at least 20 hours doing menial tasks to  bump myself up, and the the cynic in me couldn’t help but notice the Ubisoft online store where I could buy a permanent experience booster for real-world cash…

Assassin’s Creed: Odyssey is a perfect example of why pacing matters, and it also demonstrates that massive, sprawling worlds don’t make an excellent adventure through size alone. When all was said and done, Odyssey offers 40 hours of great material wrapped up in another 40 hours of busywork that made this Greek journey a slog to get through. heads up, developers — just because there’s a ton to do doesn’t mean that it’s worth doing. Rating: 6.5 out of 10

Disclosures: This game is developed by Ubisoft Quebec and published by Ubisoft. It is currently available on PC, PS4, XBO. This copy of the game was obtained via publisher and reviewed on the PS4. Approximately 82 hours of play were devoted to the single-player mode, and the game was completed. There are no multiplayer modes.

Parents: According to the ESRB, this game is rated M and contains Blood and Gore, Angry Chickens, Intense Violence, Socrates, Sexual Themes, Sneks, and Strong Language. A lot the architectural stonework features full frontal nudity. The main character has the option to sleep with many different people throughout the game, and while the sex is never shown, it’s highly suggestive. Cursing is heard all over the world, including a few more colorful terms even I haven’t been exposed to before. Blood is omnipresent through combat and there are scenes that include moments such as a spear going through someone’s throat.

Deaf & Hard of Hearing Gamers: There are many audio cues that can alert a player to someone’s presence nearby. While an icon will show up letting you know if you’re about to get spotted, the only way to track an unaware enemy through a wall is to “tag” them beforehand. Judicious use of “eagle sight” will help, as it can tag anything of note through even the thickest walls. No segment in the game relies only on audio, however, and most everything can be tracked visually. Subtitles will list who is speaking, but cannot be resized and will always be white. 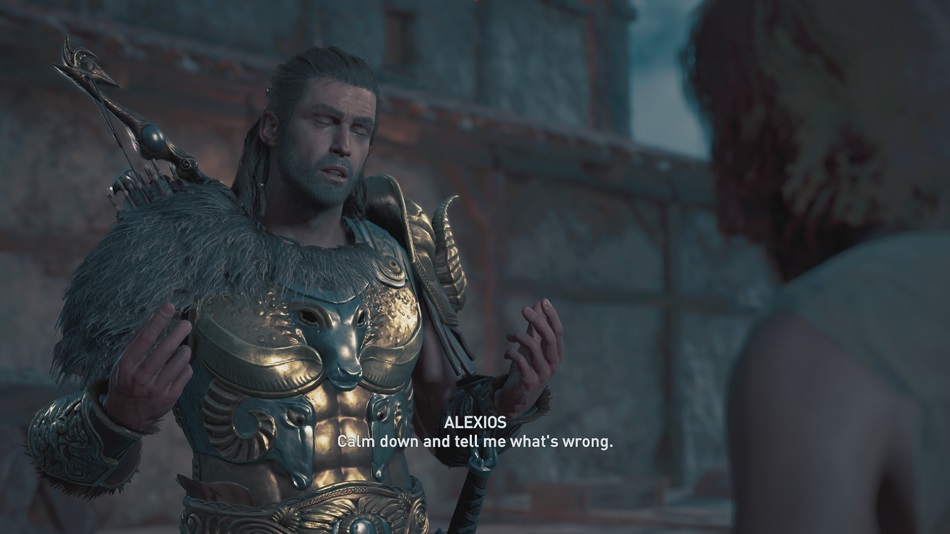 Remappable Controls: There are two different control schemes to choose from, but the buttons are not remappable. 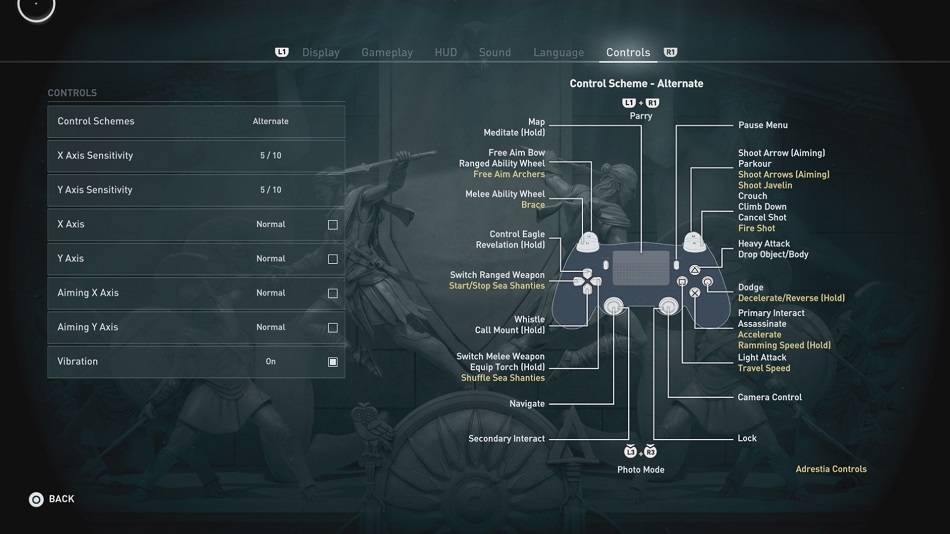 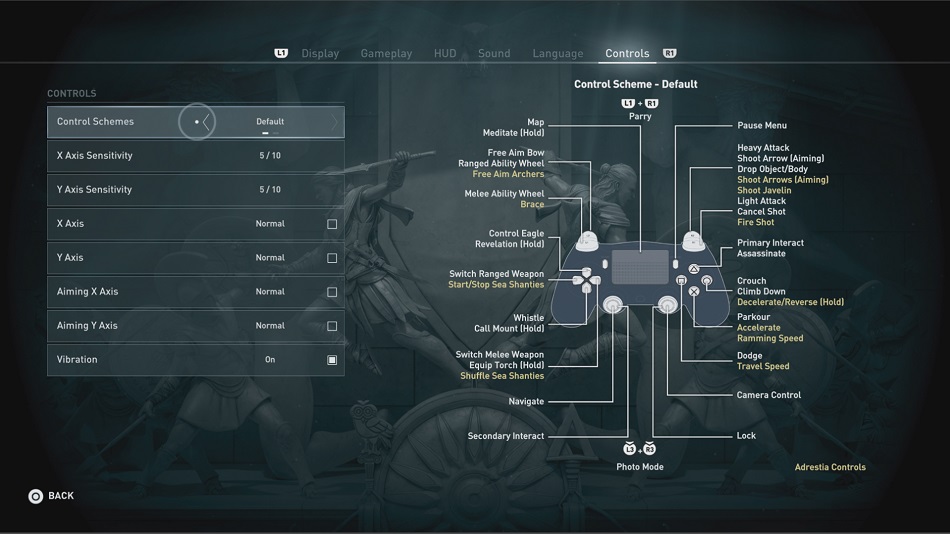 Great review! I love that Ubisoft decided to bring the settlement missions back in Valhalla. That was something I always remembered and enjoyed from ACIII. Can’t wait to play the full version of this game next year when they release the complete game with all the DLC next year screw ever buying a Ubisoft game on launch just to have to pay more for the season pass’s stripped content plus fewer bugs.

So, to sum up: Get Red Dead 2 this weekend, play that till the inevitable first major sale (black Friday perhaps?) then buy Odyssey at $30 or $35 and spend a chunk of the money you saved on the XP booster. Got it. 😉

You could definitely do that and I’m sure you’d enjoy the game. Playing the game with an XP booster is no way to play imo. But more importantly you would be actively supporting Ubisoft in designing their games this way as they will see a guy who bought the XP booster.