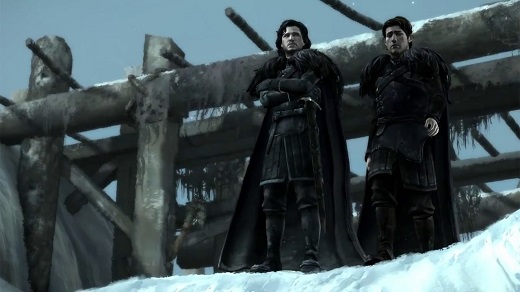 HIGH: The dialog is top-notch and frames the upcoming episodes nicely…

WTF: Saying "I'm going to kill him" moments before a character said the same thing.

The second episode in Telltale's Game of Thrones series, The Lost Lords comes with its fair share of action and moves at a brisk pace over its two-hour length, but sadly, very little is actually done to move the plot along. It doesn't have the same suspense as the first episode, Iron from Ice, nor does it have the same shocking conclusion. What results is an entertaining, but ultimately unfulfilling episode which exists only to introduce new characters and set up future conflicts.

The Lost Lords starts off across the Narrow Sea with Asher Forrester, the exiled black sheep of the family. By far the most action-packed moments of the episode revolve around Asher and his mercenary friend, Beskha. While the two seem to have a Han Solo/Chewbacca sort of relationship, very little insight into either one was revealed. Asher is homesick and Beshka clearly has a troubled past; neither has much screen time to be fleshed out.

I can't get into details about the second player character without massive spoilers, but I will say they were my favorite character in The Lost Lords and will clearly be the focus of the scenes that take place in Ironrath. They give a face to the fractured House Forrester to replace Ethan after his departure in the previous episode, and watching as they try to pick up the pieces is heartbreaking. I'm excited to have someone whom I feel could go up against Lord Whitehill and the soldiers garrisoned at Ironrath, despite the condition they start in. Hopefully they prove to be the one who gives Whitehill the murdering he deserves.

While Gared Tuttle's story was exciting in Iron from Ice, it's by far the most uninspired here. Having finally reached The Wall, Gared starts his Night's Watch training with a few boring QTEs and the obligatory Angry Instructor. His scenes almost mirror Jon Snow's in the Night's Watch from the TV series, right down to teaching other recruits how to handle weapons. In addition, there was nothing done to advance the mystery of The North Grove, making my time with Tuttle feel like a waste.

Mira Forrester is still the oddball in the story. Having my first efforts to help the Forrester family blow up in my face made me play it safe this time around. As such, she felt disconnected from the plot while everything moved around her. Sure, she was able to give a little prod here and there in hopes of saving her family, but in the end nothing I did felt like it could have changed much at all. In addition, the murder plot at the climax of her story seemed like it was thrown in to put her in danger with no real motive that I can see. I want to like Mira's story more than I do since political backstabbing is a big part of what I love about Game of Thrones, but right now I feel that I could completely skip her parts and miss nothing important.

Telltale's sophomore episode frontloads all of its secrets at the start of its 120-minute adventure. While this means it starts off strongly, things peter out toward into an uninteresting holding pattern. No big reveals, no surprise ending, and no power moves were made to advance the plot. The entire chapter felt like a placeholder putting the cast into position for a larger payoff later. The Lost Lords isn't bad by any stretch, but it pales when compared to the stellar premier episode. Rating: 7.5 out of 10


Disclosures: This game was obtained via publisher and reviewed on the PC. The game was completed in approximately two hours with one playthrough.

Parents: This game is rated M according to the ESRB. This game contains intense violence, blood and gore, strong language, underage drinking, a sappy song, and a giant wall of ice.

Deaf & Hard of Hearing: All the dialog is subtitled and everything that can be interacted with is contextually displayed on screen.