Playing with Ice and Fire 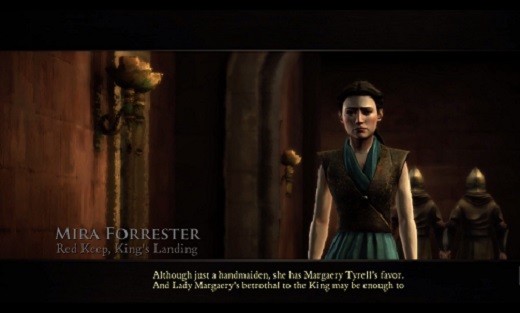 HIGH Fans of the series will be pleased…

LOW …But everyone else will have no idea what's going on.

Westeros is a harsh, unforgiving place. Horrible people do horrible things and get away with it constantly. In this world, ethics and morality are handicaps that those who want to survive can ill afford.

Playing Telltale's Game of Thrones debut episode, Iron from Ice, I was genuinely questioning what would happen to House Forrester thanks to my actions. Every time I tried to be honorable, it seemed like I was making things worse for everyone. Trying to play "the good guy" felt like I was setting myself up for a fall in the coming episodes.

Before getting further in the review, make no mistake—Iron from Ice is NOT for newcomers. Telltale assumes the player has full knowledge of the books or the series and does nothing to shield the uninitiated from spoilers. In fact, the intro begins at the one of the biggest story climaxes. Jumping into Iron without previous Thrones familiarity would be like watching the last 30 minutes of The Empire Strikes Back without ever having seen Star Wars, so consider this a warning. Unlike Telltale's other series, this is not a good place for a first taste of Thrones.

Getting back to Iron from Ice, it's told through multiple viewpoints, much like the TV show, and each of the three protagonists have a connection to the newly-introduced House Forrester. Young Ethan Forrester is charged with trying to hold his house together against an aggressive rival's actions. His sister Mira conspires in the capital of King's Landing to bring political safety to her family. Rounding out the cast is Gerad Tuttle, a squire for House Forrester tasked with delivering a cryptic message home from his Lord.

Gerad's tale shows the plight of the commoner when those in power go to war. While opposing lords are just as likely to die in Game of Thrones as peasants are, they have some choices to make, and a bit of control over their situations. Gerad, however, has no such privileges and has to ride out the storm in any way he can. The squire's sections are also heavy on action when compared to the other two. Having to defend himself several times, his portions are filled with quick-time events and spur-of-the-moment decisions. His scenes add a much-needed break from Ethan's and Mira's more political chapters. 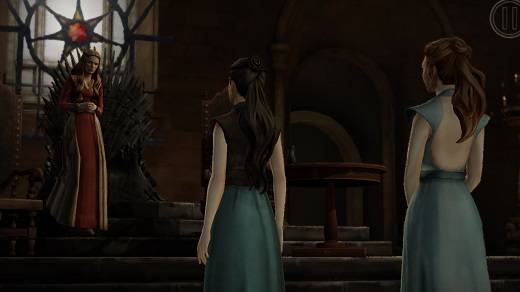 Of the three, I found Ethan's story the most intriguing. The young boy gets thrust into a position of power very quickly and suddenly finds himself having to make decisions most grown men would never have to worry about. Every choice I made as Ethan had me second-guessing myself. Whether doling out punishment for a deserter or dealing with a boorish rival lord, I was always expecting things to spiral out of control. I attribute this dread to the excellent writing and acting, especially from Ethan's advisers. Each of them has their own ideas on how to deal with situations, and their conflicting opinions added to the weight of my choices.

Mira's story, on the other hand, was not only the weakest of the three, but also the least friendly to anyone new to Game of Thrones. The segments in King's Landing are filled with several cameos from the series which use the likenesses and voices of the TV actors. While this gives Iron from Ice credibility for the fans, it does nothing for anyone unfamiliar with who these people are and what their motivations might be.

Fortunately, I've kept up with the show, so being summoned before the Queen filled me with an appropriate dread. Unfortunately, the scene relies far too much on established characters to sell it to anyone looking from the outside in. In addition, Mira's entire subplot feels like it was added solely to provide cameo opportunities for the cast of the show. While there was one plot kernel that could come to fruition in a future episode, Mira could be cut from the game and nothing would be lost.

If there is one thing that bothers me about Iron from Ice, and most Telltale games by extension, it is the illusion of choice it tries to foster. In the moment, yes, the choices certainly felt like they mattered. In retrospect, everything ends exactly the way Telltale wanted it to. No matter what I do, the result will always end roughly the same way. Playing through once doesn't highlight the problems as much as a replay does, but any veteran player of The Walking Dead or Tales from the Borderlands will quickly realize that there is no fate but that which Telltale makes. My advice is to play only once and accept the result—replays will just shatter the illusion.

As a fan of the series, I loved Game of Thrones Episode One: Iron from Ice. It's a great start that does the show justice and perfectly captures the brutality and political intrigue of Westeros. Iron from Ice also sets up the rest of the season nicely, leaving plenty of room to expand on its shocking ending. That said, do not approach this game without being caught up to the third book or season three of the show. Too much is spoiled and too little explained for anyone not up to that point. Rating: 9 out of 10


Disclosures: This game was obtained via publisher and played on the PC. The game was completed twice over the course of 4 hours to check for any major differences in choice.

Parents: This game is rated M by the ESRB for blood and gore, strong language, and intense violence. There are graphics scene of war, torture, and dismemberment. Also, while there is none to be found in this game, the source material does contain several instances of sex and full frontal nudity of both genders—something to keep an eye out for in future episodes if it holds true to the HBO show.

Deaf & Hard of Hearing: The entire game is playable with subtitles turned on for dialog only. There are no audio cues needed to progress and all information is presented contextually on the screen.