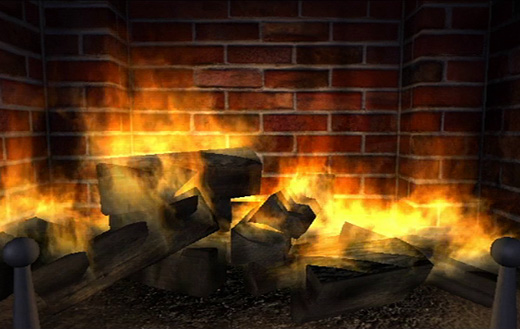 HIGH Look at those realistic flames! And all the different kinds of wood to burn!

WTF This is the Wii's second fireplace simulator. Is this actually a thing?

In his book Fire, Sebastian Junger writes, "What is this fascination that roots firefighters in their tracks while three-hundred foot flames twist out of a stand of spruce? …[It is] an amoral sense of awe that has nothing to do with their understanding of the larger tragedy."

Sure, this is a good observation about why people are drawn to a primeval element like fire, whose destructive nature and place within the cycle of nature's recursive events are fascinating. So much so, in fact, that someone thought it would be a good idea to create a video game based around it. But really, there's nothing awe-inspiring about Cozy Fire

. And the only tragedy is probably the time you waste actively playing with it—at least if you're a core gamer.

Now, I'm aware that a digital app (calling it an actual game with gameplay would probably be a stretch) like Cozy Fire isn't there to entertain or titillate, as most games are. And, as such, the program (unsurprisingly) fails spectacularly to provide any sort of thrill. But that's not really the point—not for hardcore fire simulator fans. And for this niche, there are choices aplenty: Pick from multiple different fireplaces! Poke at the fire! Burn various different kinds of wood! Not to mention handy stat trackers that keep tabs on the temperature of your fake fire, how many pieces of fake wood you've burned and even your number of "burns"—what I can only assume is part of the trendy fireplacing nomenclature tossed around by virtual fireplace enthusiasts during weekly community lodge meetings. Features like these give Cozy Fire an edge over its competition (which at the moment consists of Wiiware's groundbreaking debut fireplace entry Fireplacing); unlike Fireplacing, however, Cozy Fire is straight business, with the bulk of one's interaction simply with the fire itself.

A cursory glance at Fireplacing, though, and you might think otherwise. Starting a fire in the game, a process that involves lighting a pinecone on fire and stoking the flames with a nearby bellows, may seem to imply a more hardcore stance on virtual fire tending, but it soon gives way to its more narrative-driven focus.

To put it directly, in a straight comparison of Fireplacing and Cozy Fire, the Wii's original fireplacing sim spends far more time weaving a delicate backstory and playing with artfully positioned camera angle—using an (admittedly somewhat cookie-cutter) palette of themes such as "Christmas" and "Romance." Fireplacing's various hearths tell tales of people's lives as well as the fires that bring them together, while swinging the camera around to focus on the little details conjure up burning questions (Whose dog is in the photograph above the hearth? What kind of relationship does the care put into the arrangement of Christmas decorations indicate?). 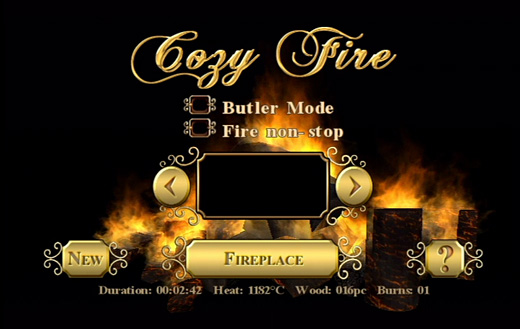 Whether or not you stop to think about how cheap that bottle of champagne is or whether or not the scene foregrounded in "Romance" is actually a Freudian extra-marital tragedy waiting to happen is up to you, but given the opinions of hundreds of respected narratologists in the field, Fireplacing is a fireplace sim for flametenders with perhaps more vivid imaginations than those who would prefer Cozy Fire's more detail-oriented trappings.

Cozy Fire's open-ended scenarios also allow for a greater degree of existential freedom than the linear narrative paths and gameplay seen in Fireplacing. Suggestive of Kierkegaard's notion of self, players' agency when creating their fires fosters a strong sense of purpose with a fulfilling external presence—in this case, the fire itself. (Whether you choose to believe the developers chose to go so far as to suggest fire as an interpretation of God is your call.)

Moreover, the identity politics one can negotiate when building a new fire (represented here with all the bombast afforded a small pointer cursor on-screen) can be taken in any number of different directions, the fleshing out of which can result in the formation of an array of varied, self-assigned identities. Take, for instance, the types of wood you can choose, which range hard timber to more manufactured fare. What kind of fire do you want to stoke? And what does your choice of wood selection and placement say about your personal identity? Do you want to drop the match in, or just hold it up to the wood to burn?

Unlike Fireplacing, you have a choice when it comes to these sorts of issues, and can move and stack your wood in any way you want within the bounds of the hearth. So if you've got a penchant for Frank Lloyd Wright-layered verticality, you can channel your inner architect. If you stand to reason that you identify more with a suburban hobo taking lumber from the local home and garden store for an oil drum fire, set a bunch of two-by-fours ablaze. If you prefer the easy life, you can just switch to Butler mode, which automatically restocks your fire for you, or simply turn on the infinite burn option. You can even start a fire in the terrifying bounds of a vast, endless void—the perfect setting for those of us still struggling to find an identity amidst the random cruelty and chaos inherent in nature. Whatever your background or taste, Cozy Fire probably has you covered.

While it may not be the right fireplace sim for film buffs or lit majors, Cozy Fire

may be worthwhile for detail-driven fans looking for a little existential ascension with their fire stoking, and given the increase in agency over its competitors, may even let players learn something new about Themselves. Much like the DVD video knockoffs, however, if you're in the market for something that actually creates heat, you'll probably want to toss this one in the incinerator. Rating: 7.0 out of 10.

Disclosures: This game was purchased via retail and reviewed on the Wii. Approximately one hour was spent with the program, which is a far longer time than anyone in their right mind should actually spend actively interacting with a fireplace simulator.

Parents: According to the ESRB, this game is acceptable for Everyone; the virtual fires are safely contained within the simulated fireplaces.

Deaf and Hard of Hearing: Sadly there's no adequate way to recreate the hiss and pop of a good, strong fire without sound, but the visuals are still enjoyable and the scant menu options are mostly text-based. 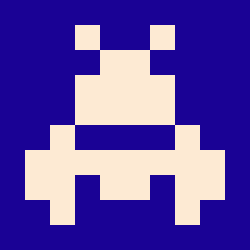