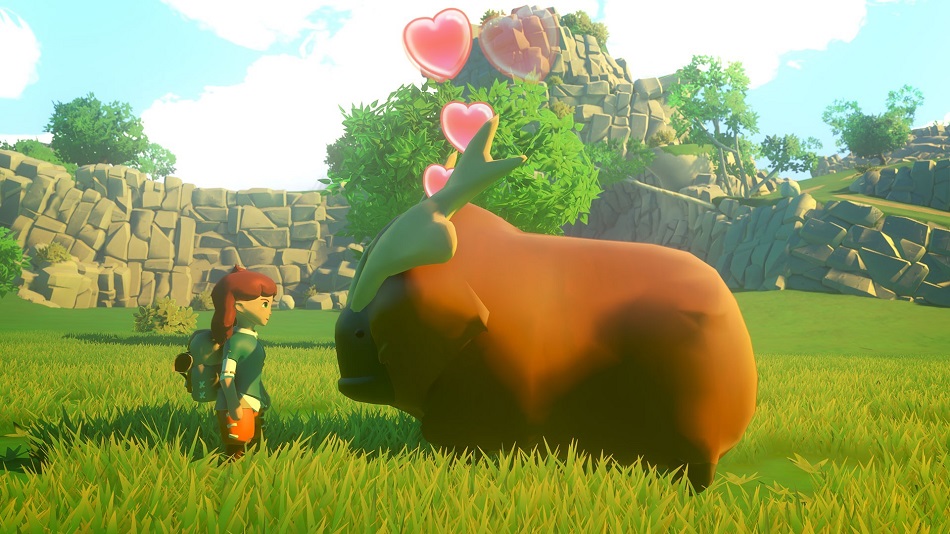 HIGH Jumping off a cliff that’s too high.

LOW Oh good, time to cross the map for an important resource again.

WTF From the recipes, it appears that this bread is made from fish oil?

I had just finished playing Mythology’s Angriest Dad when Yonder: The Cloud Catcher Chronicles landed in my lap, and I couldn’t have asked for a more extreme contrast. I went from a gory, photorealistic kill-fest to a relaxing, completely peaceful meander through a cutesy countryside. However, as refreshing as the change-up was, Yonder has some key flaws that keep it from being a real gem.

I don’t disagree with anything Brad mentions in his review of Yonder’s PS4 version. Yonder’s world is cute as a button (the animal designs in particular) but one sign of trouble is that about half the menagerie are just palette swaps of a single model. Also, the game’s land of Gemea seems to mostly be covered by short grass and feels a bit empty even in its most densely populated areas. In a desert or ice field, of course, this seems fine, but Yonder never manages to convey lushness. It feels like the world was too large for its creators.

The world feels a bit too large for the player, too. Gemea isn’t all that huge by the standards of open-world videogames, but everything feels very spread out and certain resources (planks, for instance) are available only at a single, fixed point. This leads to a lot of trips back and forth, but while Yonder has four—count ‘em!—separate methods of fast travel, none are convenient or ever put me where I needed to go.

It’s not clear why fast travel has been made so inconvenient, either. In many titles, fast travel points become a means by which the map becomes more important than the world. Yonder, however, has such steep resource requirements for crafting that traversing manually is strongly incentivized. At one point I realized that in order to finish one quest I would have to obtain 400 units of wood, by chopping down something like 100 trees! In this context, the player will inevitably spend a lot of time walking around to collect resources that allow him to build bridges and buildings and so on.

Alas, walking is essentially all a player can do. The avatar (in a nice touch, fully customizable in both appearance and body type) has a modest jump but cannot run or climb. This has the effect of making world traversal seem plodding and dull, even though the default walking speed is fairly brisk. I felt that Yonder would have benefited from snappier and more dynamic movement at its base, making the process of getting from one point to another more entertaining in its own right. 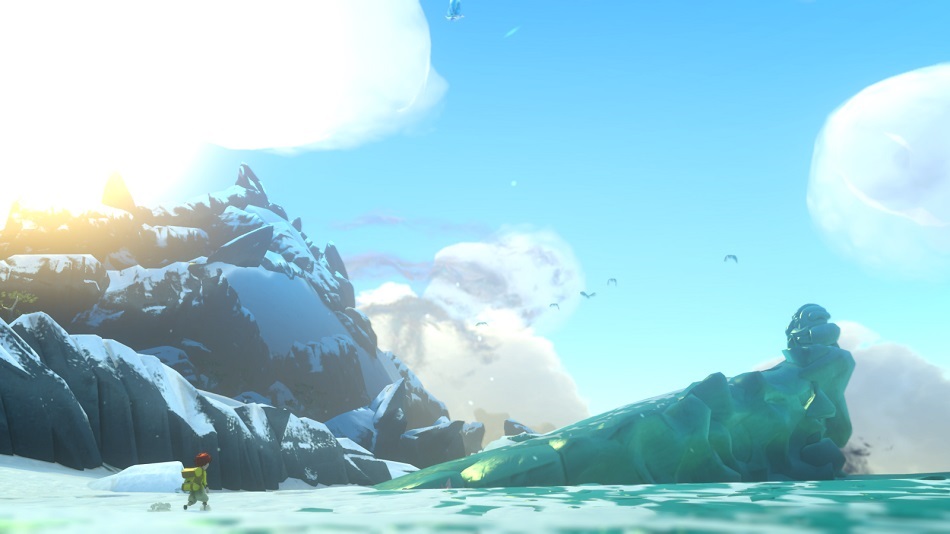 In addition to its basic resource-gathering and crafting aspects, Yonder asks the player to set up several farms. The mechanics of these farms feel underexplained — it’s not clear that it matters whether buildings are made from wood or stone, if separate fodder bins are needed for each animal, how to judge who would make a good farmhand, and so on. This makes the farming feel conceptually under-baked, which is not a good position to be in when alternatives like Stardew Valley are available.

Beyond the basics of wandering around its world and adopting cute, fuzzy groffles to pet and milk, Yonder has a story that calls on the player to explore a bit and ultimately repair a magical device that will eliminate the source of the “murk” that pollutes much of the game world. Given that plants and some animals happily exist within the murk, it’s not clear why this stuff is such a threat, but that’s hardly the game’s only problem with tone.

The moment that really crystallized this for me came late in the story. After repairing the magical device and sucking away the largest area of toxic murk, my character began to explore the ruins of the “old kingdom”, which seemed to have experienced a century’s worth of wear in, at most, two decades. The ruined kingdom is a sad place, but while I wandered through, Yonder supplied the most chipper music imaginable from its small library of tunes.

The absence of sorrow or wistfulness in that moment only magnified the fact that Yonder never used music, audio, or even visuals to establish any atmosphere. It’s all just kind of cutesy and present, and it doesn’t seem to care about encouraging the player to feel any kind of way about anything.

As negative as all this sounds, I think a lot hinges on the specific approach I took to the game, which was basically powering through over a single weekend. The Switch is suited to quick sessions and on-the-go play, and because Yonder has pretty good rewards for short wanderings (i.e. the gathering of copiously-needed resources) it’s suited to that too. If played in that style, I think a lot of Yonder’s minor weaknesses sort of dissolve. And, like Brad, I think this game is excellently suited to younger players who will not care so much about things like the atmosphere or the quality of its farm simulation. The Switch handles Yonder fairly well, too, though I experienced occasional hitching as the game tried to save. I also had one crash in the postgame, though I didn’t lose much progress.

I enjoyed Yonder more than I otherwise might have because I played it at just the right moment — it served as a palate cleanser after one of the year’s bloodier games. That said, I still found Yonder to be a peaceful delight despite its shortcomings. Rating: 6.5 out of 10

Disclosures: This game is developed and published by Prideful Sloth. It is currently available on Switch, PS4, and PC. This copy of the game was obtained via publisher and reviewed on the Switch. Approximately 12 hours of play were devoted to the single-player mode, and the game was completed. There are no multiplayer modes.

Parents: According to the ESRB, this game is rated E and contains Crude Humor. This is mostly apparent in an extended environmental fart joke and the presence of cow poop. This game has absolutely nothing for parents to worry about.

Deaf & Hard of Hearing Gamers: The game does not contain any spoken dialogue and all text appears in dialogue boxes (white on black). Text size is nice and large but cannot be adjusted. Audio cues are important for finding particular collectibles (cats). 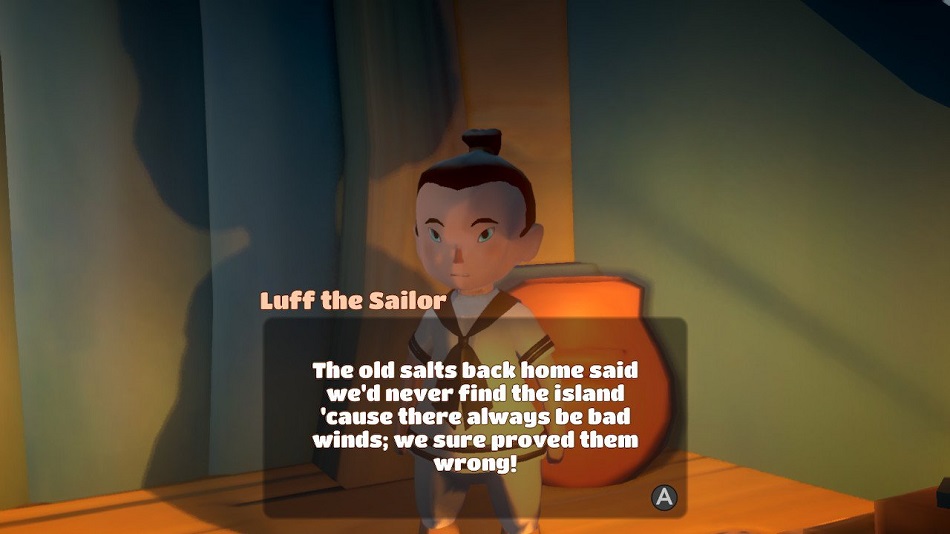 Remappable Controls: No, this game’s controls are not remappable. The game has movement on left stick and camera on right. Face buttons are used for action and menu access. Shoulder buttons are used for selecting tools in the field and navigating menus. Objectives and map access are mapped to the D-pad. 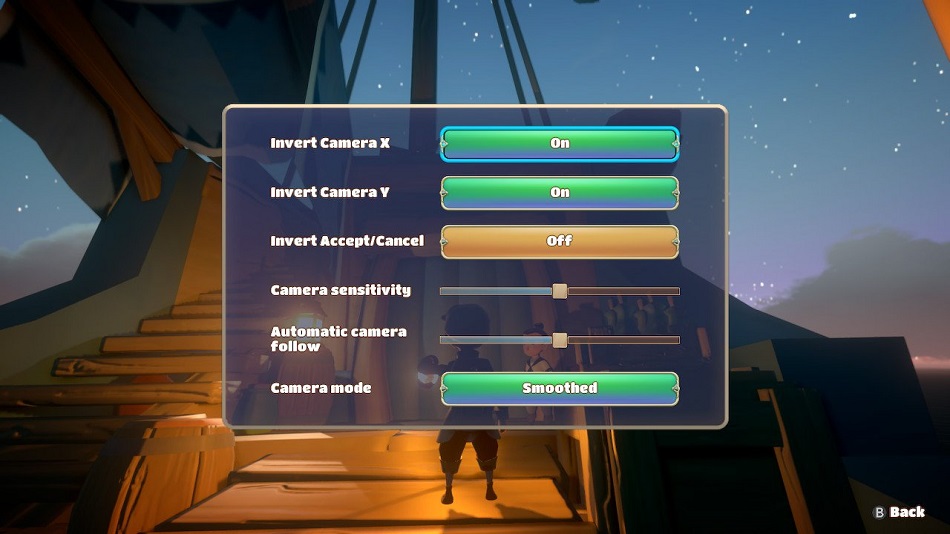