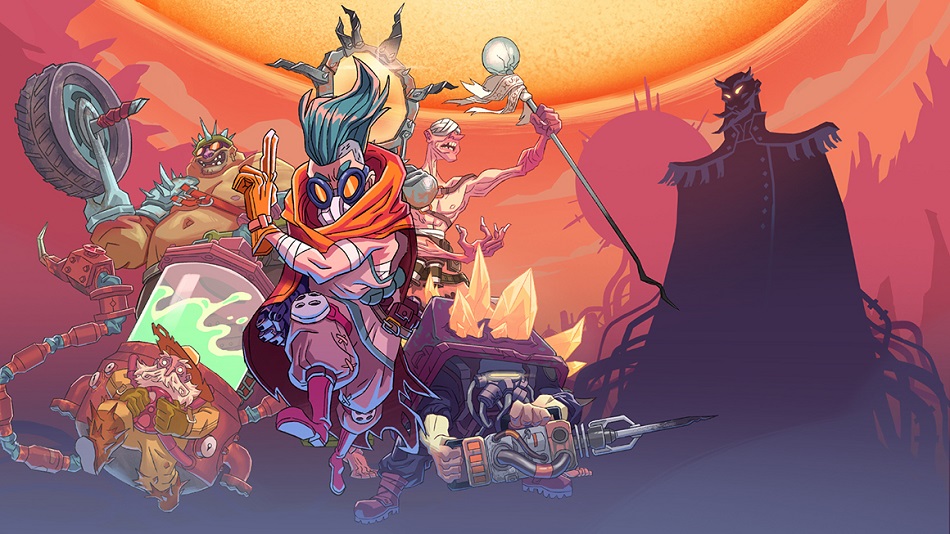 HIGH Defending perfectly against a huge wave of enemies and knocking them all out with a body slam.

Way of the Passive Fist seems like it’s hit at just the right moment. This tale of a Wanderer who comes in from an apocalyptic desert to take on a diabolical scientist solely through the art of defense seems apropos as the nation once again debates the significance of videogame violence. Unfortunately, Way of the Passive Fist feels under-imagined, and ultimately too limited to be very interesting.

As one might guess from the premise, the enemies and environments in Way of the Passive Fist generally feel like a loose homage to Mad Max, though there’s no coherent aesthetic aside from a chunkiness intended to evoke memories of ‘90s arcade brawlers. The game also shares certain structural similarities to titles from that era, as it’s a long left-to-right scroll down a broad avenue, though movement stops in order for “scenes” of melee to play out. Health and powerups never drop from enemies, however, and can only be found between scenes.

In each instance of combat, various ninjas, robots, burned-out cultists, and mutants jump onto the screen to attack The Wanderer. Two of the game’s four independently adjustable difficulty sliders allow the player to choose how many foes appear and how hard they hit, though no matter their numbers, they all patiently wait to attack in turn. This behavioral feature makes The Wanderer’s shoulder check (ostensibly useful for adjusting spacing) essentially useless.

Consequently, The Wanderer’s real tools for dealing with incoming attacks are a block and a dodge, each with some variation in their tactical use. Some attacks, including many thrown projectiles or enemies that try to grab and bodyslam The Wanderer, can only be dealt with by dodging. Kicks, punches and weapon attacks can typically be dealt with by blocking. Either way, correctly timing the action is essential to avoiding damage — the right moment is typically announced with a cue, some of them visual but many relying on sound.

Most enemies can be defeated by blocking or dodging their attacks until they run out of energy, at which point they can be knocked over with a poke of a finger. However, because everyone attacks one at a time like movie ninjas and their rhythms, once learned, don’t vary, the game becomes rather repetitive. Each scene is a matter of standing in the center of the screen (or, to make things even simpler, moving to an edge), turning to address the most recent incoming enemy, and blocking according to the rhythm. 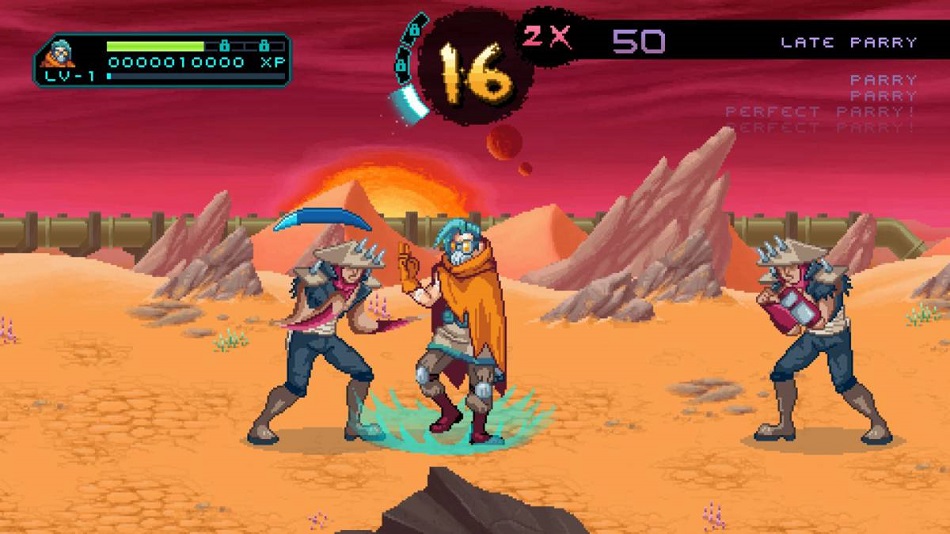 This gets broken up in a few stages by things like falling rocks or artillery shells. The boss fights, too, occasionally have enough enemies to make simultaneous attacks happen. These scenarios mostly lead to a little usage of the game’s dash function to return to the one-on-one baseline rather than developing new and more interesting tactical possibilities.

The fights can go on for a long time, but the action lacks variety. There’s no way to play enemies or their particular attacks off each other. The Wanderer can catch and toss back a Molotov cocktail, but the ensuing explosion will only ever harm the woman that threw it, not the crowd standing around her. There’s no way to use an exhausted enemy to restrict combat spacing, or to lead an enemy’s punch into one of its comrades. The variety of enemies that show up in a given scene simply dictates the set of rhythms that must be remembered; there’s nothing else to do.

Perfectly timed parries and dodges contribute to a super meter. One of the difficulty sliders allows for imperfect blocks to build the meter too. As the meter builds, a score multiplier is added and various super attacks are charged up, starting with a punch and building up to a brutal slam and an additional area of effect attack. This sort of sells out the premise, in that the passive fist just becomes a way to build up a very active fist.

Using the supers is optional in most scenes, although robotic enemies can only be defeated by offense. In the boss fights, use of supers is essential, as defensive actions do almost nothing to tire them. In most cases a bunch of mooks also show up on the stage, and the fight is a process of using the mooks to build up a super-punch to be used on the boss. Unfortunately, the punch has a seemingly narrow vertical window, and I was often surprised to see it didn’t connect. A complicating factor is that it’s fairly easy to lose the super charge — taking damage kills the meter (and that seems completely fair) but taking unnecessary actions also kills it, which seems like too much of a punishment.

In its very last boss fight, Way of the Passive Fist changes things up by introducing an attack sequence where strikes come randomly from one side of The Wanderer or the other. This is an ill-advised choice for two reasons. The first is that it requires a very different approach than every other fight in the game. The second is that this attack, though substantially more difficult to deal with, is markedly more interesting and engaging than anything else in the game, demanding more attention and sharper play.

Even if Way of the Passive Fist had pushed that need for rapid assimilation and complex reaction into every fight, I’m not sure it would be much improved. Fundamentally, the palette of action choices felt too limited, and the stately procession of single challengers makes each melee seem slow and boring. The premise feels compromised by the use of defense solely as a way to build up to violent attacks, rather than a way of dealing with bosses on its own. There’s an interesting idea or two in here, but they’re not developed into a complete, coherent experience. Rating: 5 out of 10

Disclosures: This game is developed and self-published by Household Games.It is currently available on PC, PS4, and XBO. This copy of the game was obtained via the publisher and reviewed on a launch edition PS4. Approximately 8 hours of play were devoted to the single-player mode, and the game was completed. There are no multiplayer modes.

Parents: According to the ESRB, this game is rated T and contains Violence, which, I mean, fair enough. However, there’s no gore or blood, and as a consequence this rating seems a little stiff. I think it should be fine for preteens, though maybe not for very young kids.

Deaf & Hard of Hearing Gamers: The game has subtitles for all dialogue. Most attacks come with audio cues to help with timing, and some bosses and enemies have attacks that have audio cues with no apparent visual cue. It is my opinion that this game will be much more difficult and maybe impossible to complete for players who cannot hear or have trouble hearing.

Colorblind Modes: There are no colorblind modes available in the options. Palette swaps are a major part of the distinction between various enemy types, so colorblind players may find the game somewhat more difficult.